Raymond James has taken a stab at how exposed (or insulated) companies in its coverage area are to the escalating trade tensions between the US and China.

Nokia Corp. (NYSE: NOK) and Ericsson AB (Nasdaq: ERIC) also stand to benefit, as they are not US-based and, of course, are not Huawei, he added.

As viewed through the Raymond James lens of coverage, NeoPhotonics Corp. (NYSE: NPTN) has the highest exposure to China -- over 50% of sales there, with 45% to Huawei Technologies Co. Ltd alone. Oclaro Inc. (Nasdaq: OCLR), he said, gets about a third of sales from China today. Lumentum Holdings Inc. , meanwhile, has exposure to Huawei of about 11% of revenues, and 15% of total sales to China, based on fiscal year 2018, he said.

China contributes about 27% of the market for optical components, worth roughly $1 billion, from Western-based companies, down from about a third in 2016, according to Raymond James estimates. 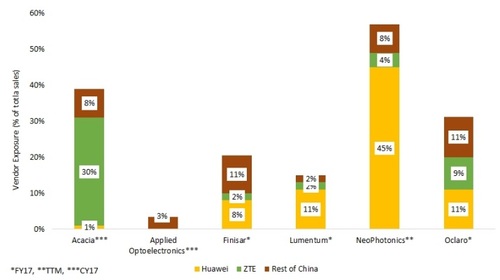 With respect to US-China trade relations, Leopold said the pendulum is swinging mostly negative amid some minor positives.

That positive? Lumentum announced today that Chinese regulators approved its acquisition of an occurrence that follows a recent can-kicking effort by the US and China to delay a US plan to raise tariffs on Chinese goods to 25% (from the current 10%) starting Jan. 1. The Lumentum-Oclaro deal is expected to close on December 10. (See Lumentum Sweeps Up Oclaro in $1.8B Deal and US, China Agree to Delay Tariffs Hike .)

While indicating that approval by China was good news for Lumentum, Leopold said escalating trade tensions brought on by the arrest "should rattle investors' nerves," given that most optical component suppliers "have meaningful exposure to China."

Among the big negatives, of course, were reports that Canadian authorities arrested Huawei CFO Meng Wanzhou on Saturday, December 1 for possible extradition to the US on suspicion that the China-based company violated US trade sanctions against Iran.

The arrest, which put the trade tensions between the US and China on full boil, also caused US Sen. Mark Warner (D-Va.) to unleash a statement, delivered in a Tweetstorm that, in part, urged President Donald Trump to come down on Huawei like a ton of bricks. (See Canada Arrests Huawei CFO  Report and China Slams Huawei CFO's Arrest, Huawei 'Not Aware of Any Wrongdoing'.)

It's my hope that the Trump Administration will hold Huawei fully accountable for breaking sanctions law, as it failed to do in the case of ZTE.