Verizon and Nokia snuggle up in private 5G

Weeks after it had apparently spurned Nokia, handing a $6.6 billion 5G contract to South Korea's Samsung, US telco giant Verizon is back in the arms of its Finnish supplier.

The two firms have buddied up once again to provide 5G network services to companies in Europe and the Asia-Pacific, where Verizon lacks its own mobile infrastructure. Nokia would probably have preferred a multi-billion-dollar role in the construction of Verizon's 5G network in the US. But at least it now has a telco partner for its private wireless push.

That has been one of the fastest-growing parts of Nokia's business this year, with second-quarter revenues at the overarching Enterprise unit up 18%, to 376 million ($445 million), compared with the year-earlier period. In the private wireless segment, Nokia sells products and expertise to organizations that want a local network, separate from an operator's public systems. Interest levels are high.

Nokia has long insisted that it prefers to work alongside or through a telco partner when catering to business customers. Doing so would address the concern about competing against telco clients for enterprise work. For precisely that reason, Ericsson, Nokia's main non-Chinese rival, has said it will approach customers in this market only through service provider channels.

With Verizon, Nokia gains a telco partner with one of the largest enterprise divisions in the world. Last year, Verizon Business made about $31.4 billion in sales, roughly 24% of the company's total, and many of its customers have a worldwide presence. "Sixty percent of our customer base has global operations," said Sowmyanarayan Sampath, the president of the global enterprise unit within Verizon Business. "Our thesis is to support enterprises where they need it."

Verizon, for its part, joins hands with a company that arguably has the most advanced private wireless strategy of all the big vendors. Among other things, the US operator will be able to make use of the Digital Automation Cloud. One of Nokia's two main private wireless offerings, that platform allows service management to be transferred to Nokia or a partner after the installation of an edge cloud server directly on the customer premises. 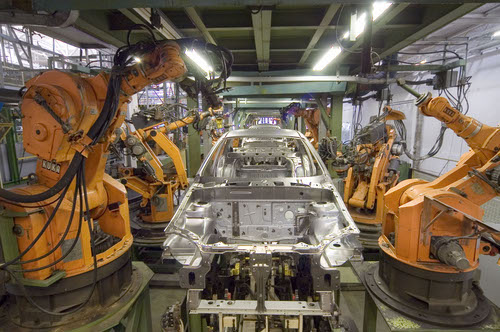 Automated factories could rely heavily on 5G networks for connectivity.

Yet many of the organizations building private networks may see little need for Verizon. Some have already acquired spectrum in government auctions and plan to operate networks without service provider involvement. For others, telcos are valuable partners precisely because they are spectrum licensees. But outside the US, Verizon holds no concessions.

"We will not be acquiring spectrum, but we will work with companies to help them as they acquire private licenses," said Sampath during a briefing with reporters. "In Europe alone, there are 12 countries that have some form of action on private spectrum. We will work with enterprises to leverage that in their local markets."

Another doubt is about the applicability of 5G. Although Nokia was able to boast around 180 business customers back in July, all but 30 were using pre-5G networks. While the technology is still young, the industry continues to fumble in its hunt for "killer applications" that would help justify the investment.

"There are new capabilities in 5G that 4G does not have, and speed is just one of them," said Sampath in trying to provide that justification. "We can get to single-digit latency on the last leg. Another is device density. Another is power consumption. You have attributes that don't exist in 4G."

We can manage it for you

As exciting as those features may sound to a network engineer, many customers will simply want their problems to be solved. And right now, there is still a question mark over how many problems are not solvable with 4G or even more advanced Wi-Fi technology.

The real selling point of the tie-up is probably not 5G per se but what Verizon and Nokia can jointly offer to any private wireless customer. From Verizon's perspective, that means trumpeting its 20-year history as a global managed network and security provider, looking after more than 400,000 devices worldwide.

"We have the capabilities on a country-by-country basis to work with the customer and make sure the private spectrum gets applied for correctly, and we'll then design the solution, deliver the service and manage that implementation," said Peter Konings, Verizon's director of products for the EMEA region. "In the end we are providing a fully managed solution."

Today's move is important because it establishes a major telco more firmly in the private wireless space, said Pablo Tomasi, a principal analyst with Omdia. "So far, service providers have had only a marginal role in private networks. However, things are changing," he told Light Reading. "This will not happen overnight, but these are the first steps in the right direction."