Energy Giant Shell Is Not Sold on Private Networks

"Public, public, public." Johan Krebbers, the IT chief technology officer of energy giant Shell, could not have been clearer about his network priorities, and the message will not have been warmly received by some members of his audience.

Speaking at the recent Private Networks in a 5G World event in London, Krebbers revealed Shell has little current need for new 5G technology and even less enthusiasm for private networks. The reason? 5G is still mainly a solution in search of a problem, and private networks are just too damned expensive. "If we can get public, we go for public," he told attendees at the conference in central London. "It is our preference because it is a much lower-cost solution for us than private."

The remarks are a cold shower for private cellular network enthusiasts. Parts of the telecom industry have grown excited by the opportunity to set up bespoke 4G and 5G networks for organizations that want to bypass the public system. Some governments are even reserving spectrum for these local deployments, depriving traditional service providers in the process. If one of the world's biggest energy companies thinks private is too expensive, other firms will probably feel the same.

On the other hand, Shell's position seems like good news for mainstream operators such as T-Mobile US, which already provides public network services to Shell. In the worst-case scenario, a private network likely leaves no role for the traditional operator: An organization simply acquires spectrum, buys equipment from a vendor like Nokia, with direct-to-enterprise sales channels, and operates the network itself. The fewer such instances, the better, as far as operators are concerned.

Even so, the Shell man's downbeat take on 5G may disappoint everyone, as communications players look to the new technology for a sales boost. "For many things we can get away with 4G," he said. "We are interested in 5G, but we will not be a driving force behind it."

Krebbers has an eye on 5G because it may be needed for "time-critical" activities and what he calls "guaranteed delivery." One potential scenario involves using it to transmit images captured by aerial drones in real time. But when it comes to the main priorities of predictive maintenance and basic connectivity, 4G looks good enough to the Shell man.

Edge computing -- which aims to cut the physical distance between IT resources and end users -- is another technology Shell will try to skirt around whenever possible, said Krebbers. "We try to avoid it because it means an extra cost component," he said. The edge could be used when there is too much traffic to send across the network, and if activities are time critical. But there are few obvious examples of such "low latency" requirements today. 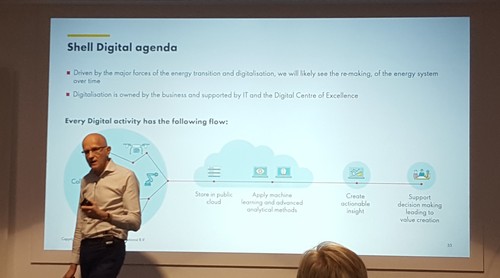 Johan Krebbers, the IT chief technology officer of energy giant Shell, lays out the company's digital agenda and the associated role of cellular networks during the recent private networks event in London.

Still, at least 5G and the edge are not in the same category as WiFi, which receives a drubbing from Krebbers. "We have not implemented WiFi at any of our facilities because it is far too expensive," he said. "WiFi in refineries is very tedious to do because of all the network and cables and we could never make a case for that."

Shell's broad assessment may provide some useful pointers for the industry as it tries to figure out the right balance between public and private -- as well as the various options that sit between those two extremes. Using a technique known as network slicing, for instance, some operators hope to provide dedicated services for specific customers over public 5G networks.

Analysts are divided on their views about private networks. While some envisage a future in which thousands of companies will become de facto network operators, others believe these localized networks will be inefficient and say they could eventually be absorbed into larger-scale infrastructure.

For all his reservations, Krebbers is not absolutist in his opposition to private networks. "There will be places around the world where there is no public infrastructure and you have to do something yourself," he said. Such a gap has already forced Shell to build its own private network in Nigeria, he revealed.