ATN's Geoverse looks to capitalize on the private networking boom

Geoverse is riding high on the momentum created by its network-as-a-service (NaaS) business, and is hoping to attract potential investors and/or partners to help it accelerate its growth.

Rod Nelson, a former AT&T executive who now serves as CEO of Geoverse, said that the company has been working with municipalities such as the City of Tucson, Arizona, to roll out private LTE networks using 3.5GHz CBRS spectrum.

According to Nelson, the NaaS model typically means that Geoverse provides the core network services, SIM cards and operational support, and the customer builds the radio access network (RAN). However, in some cases Geoverse supplies the RAN gear as well. The company says the foundation of its NaaS business is its GeoCore platform, which can connect private networks with public cellular networks.

And when it comes to spectrum licenses, Nelson said that Geoverse often provides access to its CBRS PAL spectrum licenses to the customer. The company's parent, ATN International, was a big winner in last year's CBRS spectrum auction, winning 1,569 licenses in 590 counties and 32 states. 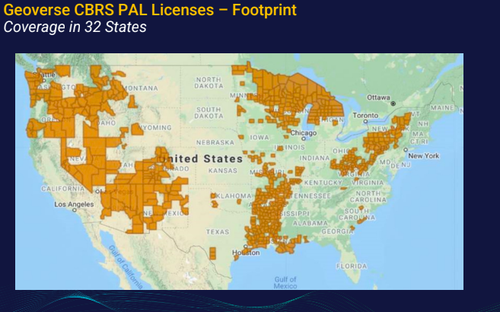 ATN won a number of CBRS licenses around the country. Click here for a larger version of this image.
(Source: ATN)

"The money from the first CARES Act led to a number of wins for us," Nelson said, noting that Tucson is probably the most prominent municipality to use Geoverse's gear but not the only one. Nelson added that Geoverse's business is accelerating in 2021, now that enterprises are also starting to eye this opportunity as well.

Besides municipalities, Geoverse believes ports and waterways are a big vertical market for private networks. The company is working with the Oakland Maritime Support Services at the Port of Oakland to build a private LTE network using CBRS spectrum that will help the port manage and track containers. "There is a host of use cases at a port facility," Nelson said. "It's an ideal environment for a private cellular network."

To keep up with the growth, the company is looking for partners or investors. During parent company ATN International's second quarter earnings call, Michael Prior, president and CEO of ATN, told investors that the company is seeing "some interesting opportunities for both organic and strategic expansion," and that it may want to use strategic or financial partners to pursue those opportunities, particularly in private networks.

ATN operates telecom systems across Latin America, the Caribbean and the US. In January, the company formed a new entity with Freedom 3 Capital and acquired Alaska Communications for $332 million.

Nelson confirmed that Prior was referring to Geoverse when he mentioned the private networking opportunity. However, he declined to elaborate further, only saying that potential partners might provide capital for the business or offer access to certain markets that would be beneficial to the company.

However, Nelson added that currently there is a delay in getting 5G-enabled end user equipment. "We are continuing to work with our end-user device suppliers on the availability of 5G end user equipment," he said, adding that this delay is industrywide and not just impacting Geoverse. Nelson said that he believes the delay is because many manufacturers have shifted their focus to providing devices for C-band instead of CBRS because of pressure from Tier 1 operators that are anxious to make use of their C-band spectrum investments.