Airwaive announced that an undisclosed group of blockchain venture capitalists funneled $3 million in seed funding into its Airwaive Project for wireless network buildouts.

In its announcement, Airwaive said it will use the funds to develop "a unique platform to create decentralized, wireless broadband networks where they are needed."

Airwaive surfaced last year. The Silicon Valley startup was founded by Jeff Yee, a former AT&T and ZTE executive. Yee pitched the company as an Airbnb for wireless networking equipment. Specifically, Airwaive said it would work to connect network operators with residential or commercial building owners who could host operators' small cells.

However, in its new funding announcement, Airwaive focused exclusively on the fixed wireless access (FWA) applications of its technology.

"There are three key things to build a local, wireless broadband network," the company wrote. "First, wireless access point equipment. Second, the property where the equipment is installed. Third, the high-speed Internet backhaul that carries the traffic to the core Internet, such as a fiber optic line."

Airwaive gave the following example: "From a 10 Gbps fiber endpoint, 100 homes in the surrounding area can be powered with 100 Mbps wireless Internet service. These cellular hotspots can pop up anywhere, with these three ingredients, forming a decentralized network."

According to the Airwaive Project website, the company hopes to begin integrations with network operators during the first quarter of 2022. By the end of this year, the company hopes to launch a "token reward" that it said would encourage users "to build and maintain a decentralized last mile. ... Rewards are generated for validated broadband connections, encouraging further growth." 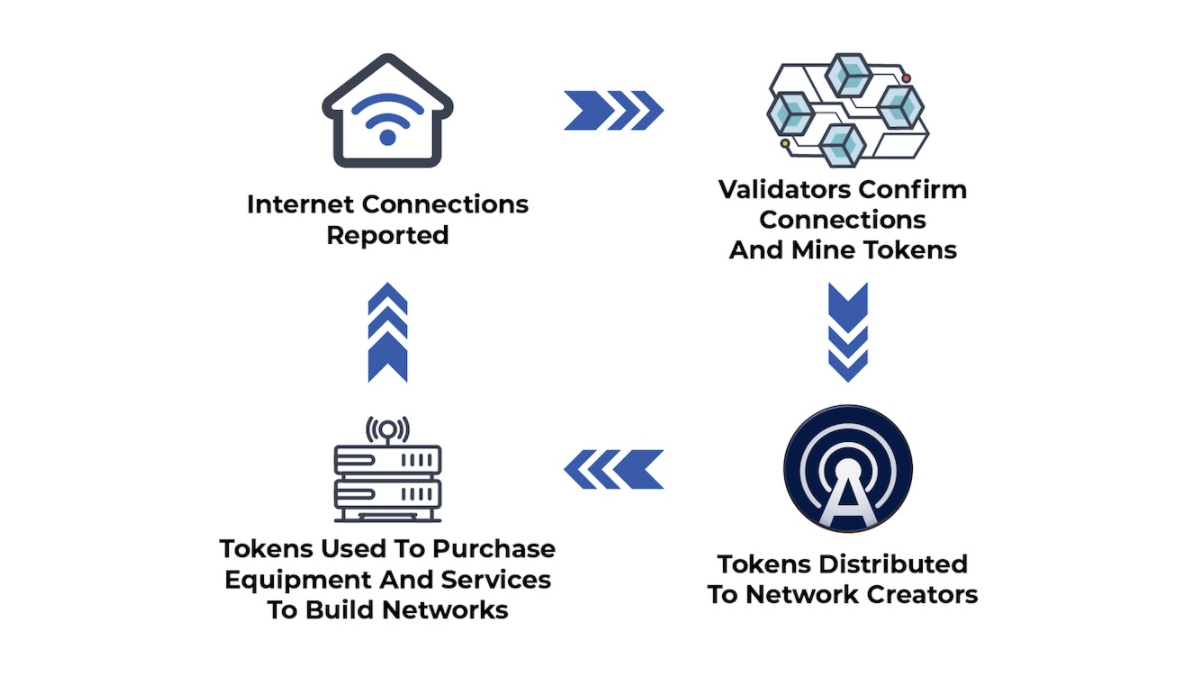 Airwaive Project is planning to launch a token-based rewards system this year. Click here for a larger version of this image.
(Source: Airwaive Project)

Airwaive appears to be trending toward the business model used by startup Helium for IoT and, more recently, 5G. Helium uses a blockchain-based cryptocurrency to reward users for installing Helium-compatible network access points. The amount of cryptocurrency that users can receive is based on the amount of network traffic that flows over their equipment.

Airwaive hinted at similar ambitions. "Airwaive Project is a foundation, created on the blockchain, with a mission to close the gap in the digital divide by bringing affordable, wireless Internet to homes around the world," the company wrote. "At Airwaive, our marketplace and applications power any type of wireless network in any location."

Airwaive's emphasis on FWA technology doesn't come as a surprise. Both Verizon and T-Mobile, along with a host of smaller companies, are hoping to deploy fixed wireless Internet services across wide swaths of the country. Moreover, operator interest in widespread small cell deployments appears to be waning amid a renewed focus on midband spectrum buildouts.