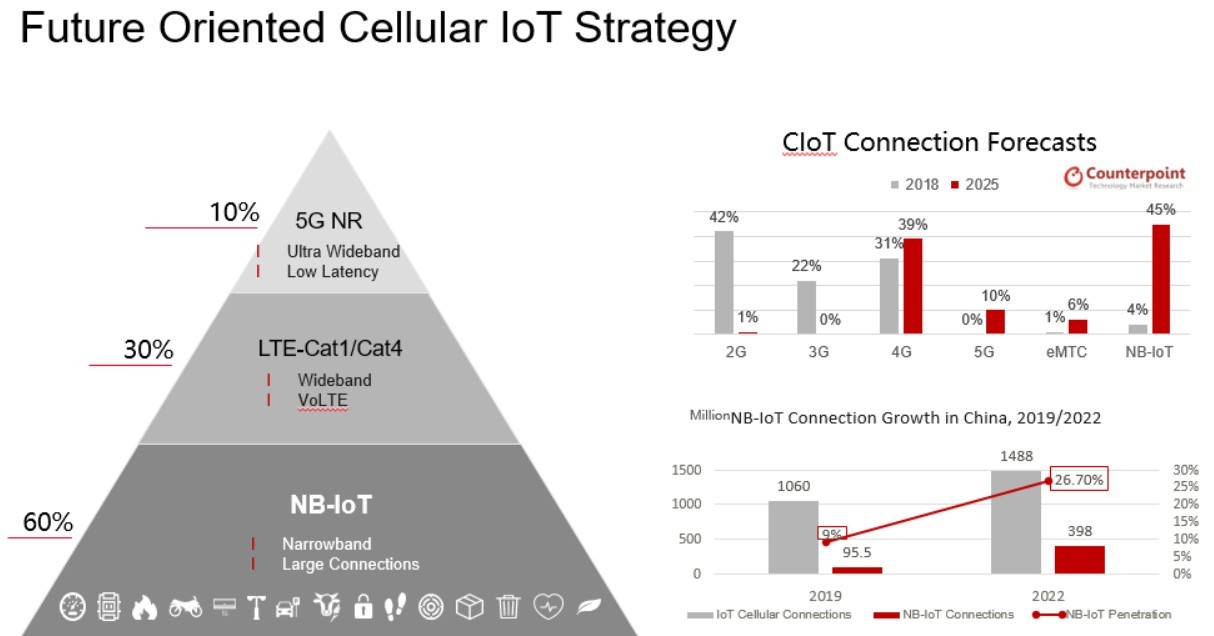 In May this year, China's Ministry of Industry and Information Technology issued a formal notice on further promoting the comprehensive development of cellular IoT, in which migration from traditional 2G and 3G IoT technologies to future-oriented IoT technologies is proposed. Mr. Fang says that future IoT network (in China) will consists of NB-IoT, LTE-Cat1/Cat 4 and 5G NR, and the proportions of these three parts will roughly be 60%, 30%, and 10% respectively. Based on a recent forecasts of Counterpoint, the number of NB-IoT connections in China will reach 400 million by 2022, growing at a CAGR of 150%, and the penetration rate of NB-IoT connections will reach 26.7%.

From a global perspective, NB-IoT has entered a fast track. According to GSMA tracker, there are 94 NB-IoT commercial networks in more than 60 countries by 2020Q2. Deutsche Telekom, Swisscom, Telia, and Vodafone signed a roaming agreement based on NB-IoT in 18 European countries, which will fully promote the development of NB-IoT in Europe. Major NB-IoT projects are rolling out globally. In United Kingdom, Vodafone joined hands with SES on promoting NB-IoT water meters to reduce leakage and save resources. In Saudi Arabia's project bid involving the connections of ten million electric meters, more than half of them will be based on NB-IoT. In addition, Sweden's three major energy companies plan to replace millions of electric meters with NB-IoT over the next few years. Furthermore, in an interview with GSMA, Italian company Italgas made public its success in achieving a connection rate of 97% in 2G-inaccessible areas, with the advantages of NB-IoT further encouraging the company to replace one million gas meters in 2020.

In terms of standard evolution, NB-IoT was submitted to ITU as a candidate technology for 5G LPWA in July last year. This July, it is expected that ITU will formally approve NB-IoT as an official 5G LPWA technology.

Performance-wise, R14 based NB-IoT has surpasses 2G in terms of coverage, capacity, experience, energy saving, and security. Mr. Fang announced that NB-IoT network based on R14 is capable of carrying over 2G IoT services and can be put into large-scale commercial use. 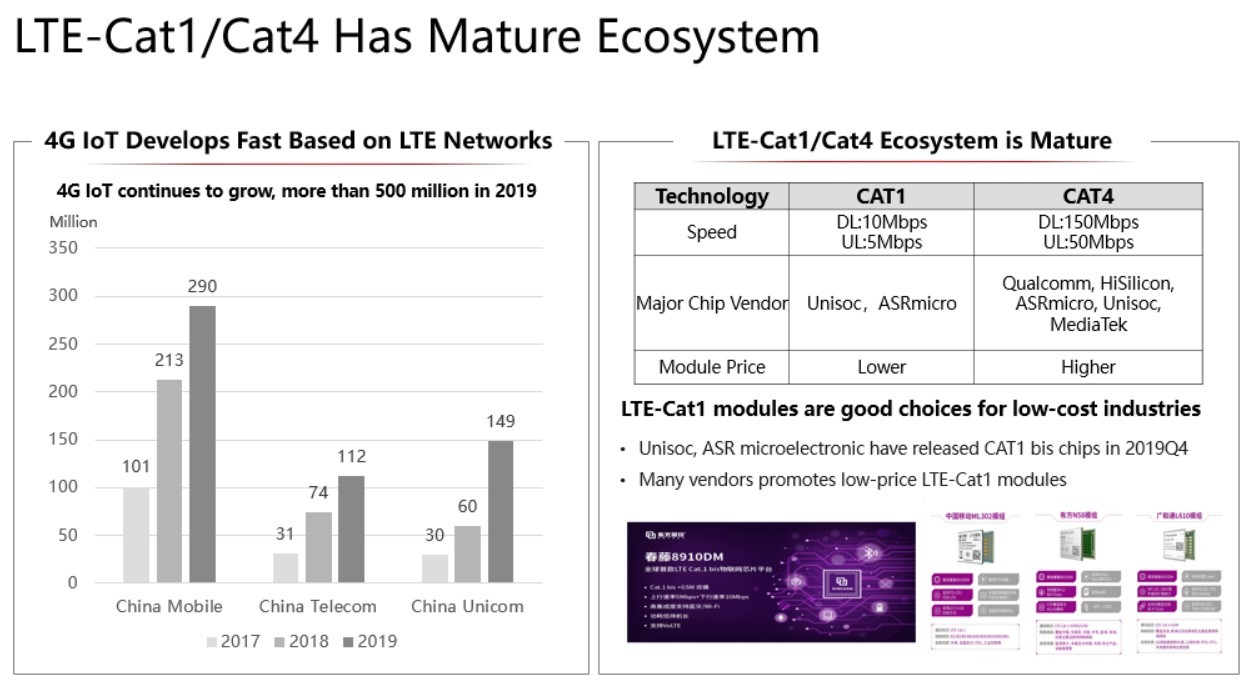 At the end of the speech, Mr. Fang also briefly introduced broadband IoT technologies based on LTE-Cat1, LTE-Cat4 and the corresponding industry ecosystem. In the past three years, broadband IoT connections of China's three major operators have been increasing rapidly and stably. With the support of major chip vendors including Qualcomm, ASRMicro, and UNISOC, LTE-Cat1/Cat4 modules are deployed in a large numbers and utilized in diverse industry applications. According to the recent industry survey, Mr. Fang says, the top 3 industries are vehicle-mounted applications, sharing economy, and upgrades of traditional 2G and 3G-based IoT applications, such as public intercoms and smart wearable devices. With LTE-Cat1 and LTE-Cat4, legacy 2G and 3G applications can be quickly migrated and upgraded.

With the large-scale deployment of 5G networks, a digital society is coming with new services such as Live broadcast, Internet of Vehicles, Smart Cities and Industry 4.0. Carriers' services are moving from a pipeline economy to a platform economy.