AT&T is embarking on a campaign to refresh its brand and improve how its customers view the company. Separately, T-Mobile is overhauling its marketing leadership as it positions itself as the leader in the 5G space.

The companies' actions come as Verizon savors its reputation as the provider with the best network. "It's no secret that everyone else is targeting our network," said Verizon CFO Matthew Ellis during a recent investor event. 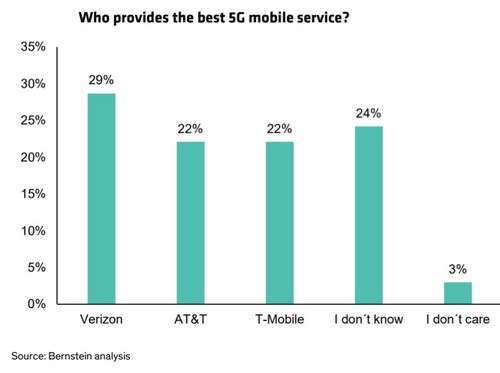 The financial analysts with Sanford C. Bernstein & Co. reported that 29% of respondents in their recent survey reported that Verizon has the best 5G network, beating the 22% who named AT&T and T-Mobile.

"This finding suggests that T-Mobile has, thus far, failed to convince enough consumers of its 5G value-add," they wrote in a recent report to investors.

The analysts' findings dovetail with other, similar surveys that point to Verizon's lead when it comes to US consumers' mobile network perceptions.

T-Mobile executives have acknowledged as much. Verizon "got out first, they got out best, and they stayed ahead on network, through the entirety of the 4G era," T-Mobile CEO Mike Sievert said recently.

But he said T-Mobile has been working hard to convince consumers that the situation is different in 5G. T-Mobile's latest 5G ads certainly take Verizon's network head on.

But T-Mobile may not be moving quickly enough. T-Mobile EVP and CMO Matt Staneff recently announced his departure from the company; T-Mobile's brand and communications work will now be led by Janice Kapner, a former Microsoft executive who joined T-Mobile in 2013.

T-Mobile isn't the only company working to improve its brand positioning.

"We haven't gotten the brand in the position of the brand and the place that I want it in the market. We're still, you know, a little obtuse as to when the AT&T brand stands for," explained AT&T CEO John Stankey at a recent investor event, according to a Seeking Alpha transcript of his remarks. "And we are about ready to do some things that are going to improve that."

When questioned about a possible brand refresh, AT&T's CFO said it's on the table. "When somebody thinks of AT&T, we have to make sure what comes to mind is great service, great product, great value proposition," said AT&T's Pascal Desroches at a recent investor event. He said the company still needs to "create an impression that is then reinforced through our marketing efforts."

It's no surprise that the nation's No. 2 (T-Mobile) and No. 3 (AT&T) mobile network operators appear to be preparing an advertising blitz. COVID-19 is gradually loosening its grip on the US, sending potentially millions of new customers to retail stores. The nation's big providers have been refreshing their promotions in anticipation of Americans' return to shopping. Further, 5G networks in the US are set to receive a significant speed boost in the coming months as AT&T, Verizon and T-Mobile all add in valuable midband spectrum licenses to their respective operations.

"5G could be the ultimate 'reopening' theme, as consumers venture out and demand faster cellular broadband coverage and capacity versus last year's dependence on Wi-Fi," wrote the financial analysts at BofA Securities in a recent note to investors.

"With COVID-19 lockdowns potentially easing/abating and a likely incrementally more competitive environment year-over-year in 2021 ... all of the Big 3 carriers have noted the expectation for increased jump balls in the back half of the year," wrote the financial analysts at Cowen in a recent note to investors.