Will the C-band auction set up US operators for a European-sized failure?

The C-band auction for 5G spectrum ended 2020 with an eye-watering total of $69.8 billion in gross proceeds. Bidding resumes January 4.

The auction's current total is almost triple some initial estimates of where it would end. The event has already far exceeded the FCC's previous auction record, the $45 billion raised in 2015 by the AWS-3 spectrum auction.

How much higher will the C-band auction go during bidding in 2021? No one knows.

But some are already worrying that US operators like Verizon, AT&T and T-Mobile might be making a colossal mistake by potentially paying so much for 5G spectrum licenses.

"I recognize that no carrier wants to concede defeat in this auction because that could mean being relegated to an 'also-ran' for the 5G era. However, from a FCC policy perspective, if all carriers are forced to slow their network buildouts due to capex limitations, we may be threatening the US ability to lead in 5G (which was the whole point of this auction)," wrote BitPath's Sasha Javid on LinkedIn Tuesday. Javid operates an extremely detailed C-band auction-tracking website.

Javid added that if US operators end up overpaying for C-band spectrum licenses without generating sufficient 5G revenues in return, they could face the same kinds of crushing debt that ruined many European operators after they collectively spent $129 billion on 3G spectrum licenses in the early 2000s.

Indeed, no US operator today is positioning 5G as a premium service for most customers, making the 5G return on investment (ROI) a tricky calculation.

"Let's hope saner heads prevail ... and bidding starts to slow down. Otherwise, it may not be that merry a Christmas break for the carriers (or, eventually, for their customers)," Javid wrote.

Others are beginning to sound the alarm too. "At some point, the aggregate dollars each of these carriers will owe is going to be more than they can possibly raise without having their credit ratings downgraded," warned financial analyst Philip Burnett with New Street Research in comments to Axios.

Some, however, aren't too worried  at least not yet. "Investors see these companies as some of the most secure around," Raymond James financial analyst Frank Louthan told the Wall Street Journal. "I don't think a slight change in a debt ratio would make much of a difference."

In fact, the analysts at Raymond James issued a note to investors Tuesday detailing how AT&T and Verizon might finance their C-band bids.

"While AT&T's balance sheet is a respectable 2.6x levered compared to Verizon at a crowd pleasing 2.2x, neither is in any dire straits as far as leverage is concerned," the analysts wrote. "The dividend coverage at AT&T is not what many investors and the financial press want to see, but a mid-50% payout (largely in that range due to media-related revenue slowdowns at WarnerMedia) isn't awful, and having already teased a $26 billion FCF [free cash flow] number for next year, we believe they are feeling comfortable with cash with a lot of options. Throw in the Crunchyroll sale for $1.2 billion and another $5 billion or so in asset sales in each of the next two years that are not in these expectations, and we can easily see the Red (Verizon) and Blue (AT&T) teams exceeding our original expectations ($15B and $6B, respectively) and taking outsized bites of the final C-Band pie ($28B and $18B, respectively)."

The analysts wrote that Charter and Comcast, which are jointly bidding in the C-band auction, could collectively spend up to $30 billion and still maintain relatively sensible balance sheets. "Since cable has a long history of shrewd spectrum purchases, this is not out of the question," the analysts wrote.

The Raymond James analysts said they now forecast the C-band auction to end at around $75 billion in total bids  that's way up from their initial estimate of $33 billion.

According to the analysts at New Street, here's where things stand in the C-band auction at the end of 2020: 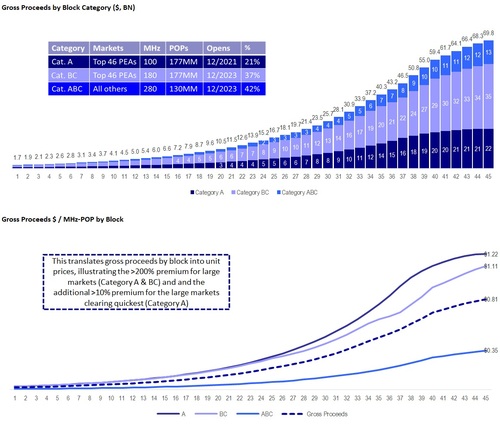 However, these figures do not take into account the "incentive" payments C-band auction winners might make to incumbent C-band satellite operators like SES and Intelsat. The FCC approved up to $9.7 billion in such payments earlier this year; they're designed to encourage existing C-band spectrum users to move off part of the band by 2021 instead of 2023. Winning C-band bidders will decide whether to make those incentive payments at the end of the FCC's auction. That's also when the FCC will identify the auction's winning bidders.

Finally, those figures also do not take into account the costs of the equipment, labor and tower rental fees that winning C-band bidders will need to cough up to turn their C-band spectrum licenses into commercial 5G signals. Those expenses will undoubtedly add billions of additional dollars to the effort.

Regardless, it's worth noting that Congress just this week allocated $3.2 billion for low-income American families and veterans who might be struggling to pay for Internet connections for things like online school. That's 25 times less than what the C-band auction is now expected to put into the US Treasury.