Cisco Systems released its annual Visual Networking Index (VNI) today, and the five-year forecast shows that, yes, video is devouring more and more of the Internet.

Those numbers aren't all that surprising given the popularity of OTT-delivered subscription services such as Netflix alongside a small-but-growing cord-cutting trend that has given rise to a cadre of virtual MVPDs that have managed to snap up some 6.5 million subscribers between them. (See OTT-TV Gains Slow to a Crawl in Q3, but Cord-Cutting Does Not  Analyst and Netflix Tops 130M Paid Subscribers Worldwide.)

But what caught my eye in Cisco's VNI presentation was a slide spotlighting the rapid rise of Internet households that now gobble up 1 Terabyte or more of data per month. That number has more than doubled from 2016 to 2017. 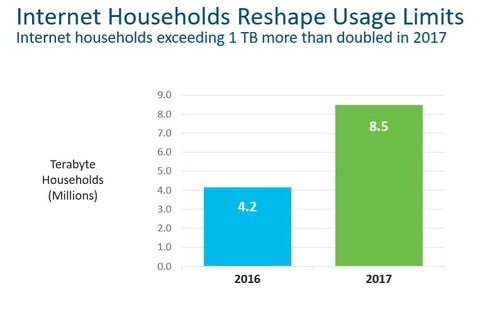 That's a key data point to keep an eye on, as 1 Terabyte is the monthly soft data cap that several ISPs, including Comcast Corp. (Nasdaq: CMCSA, CMCSK) and Cox Communications Inc. , have set before they begin to charge for extra buckets of data.

Comcast went national with its 1-TB data policy (it also offers a $50 per month unlimited data option) in the fall of 2016 after introducing it in several markets earlier that spring. At the time, Comcast stressed that about 99% of its customers don't use more than 1 Terabyte in a given month, with a median usage of 75 Megabytes. Comcast's FAQ still notes that more than 99% of its residential broadband customers don't use 1 Terabyte or more. (See Comcast Takes a (Tera)Byte Out of Caps.)

But given Cisco's latest Internet consumption findings, it would seem to follow more consumers will exceed that limit. And if Comcast and others want to provide monthly data plans at a high enough level so as not cause a sizable backlash from consumers that have blown through those thresholds, it would also seem plausible that they'll likewise have to consider raising those ceilings. Or perhaps they'll look for opportunities to exempt some OTT video traffic from their data usage policies. (See Cable Ops Preparing to Exempt Some OTT Services From Data Caps .)

Not every MSO is unified on a 1-TB data plan. Some, like Charter Communications Inc. and WideOpenWest Holdings LLC (WOW) are cap-free. Other ISPs have already set much higher data limits.

Of that latter group, Cable One Inc. , for example, sets a 900 Gigabyte data plan on its 200 Mbit/s Internet tier, and 1.5 TB for GigaOne, a DOCSIS 3.0-based offering that delivers up to 1 Gbit/s downstream and up to 50 Mbit/s in the upstream. Mediacom Communications Corp. 's data policy is even more generous -- a monthly usage allowance of about 6TB for its 1-Gig service, roughly 4TB for a tier that tops out at 500 Mbit/s downstream and 1TB for its 100 Mbit/s service tier.

Though the rise in Terabyte homes might cause some ISPs to adjust their monthly data plans, Cisco's latest study also showed that Internet data usage in cord-cutting households is about 72% higher than the average household -- 141 Gigabytes per month versus 82 GB. 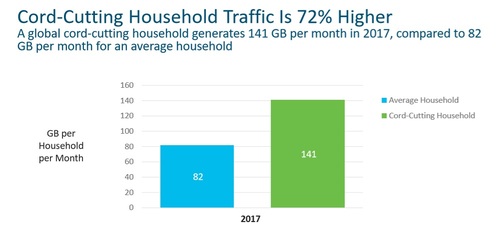 It's expected that that cord-cutting homes are getting their video fix from the Internet more often than traditional pay-TV homes, whether that fix is coming from an SVoD service like Netflix or an OTT-TV service such as Sling TV, DirecTV Now or YouTube TV.

Concerning OTT consumption and data caps, another trend to keep tabs on is the emergence of a higher bit-rate 4K video that can cut into data caps more rapidly than HD does. Netflix, for example, suggests a "steady" Internet connection speed of 25 Mbit/s or more for its 4K content, compared to just 5 Mbit/s for HD-quality streaming. 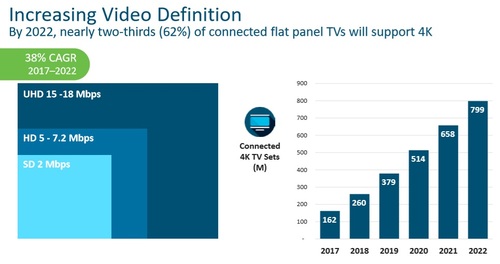 As the device, network and content ecosystem come together, "there continues to be a changing mix of the types of video" that's delivered over the Internet, Thomas Barnett, director, service provider marketing at Cisco. Barnett noted that heavier investments in broadband networks are also enabling more bandwidth-intensive applications and services like 4K video as well as virtual reality and augmented reality.

cypherstream 11/29/2018 | 10:05:59 AM
Re: Maybe not unreasonable? Game consoles will chew through 1TB+ easy these days. For example Microsofts Xbox game pass is like the Netflix of Xbox one. You pay $10 a month for access to 100+ Games to play but the caviat is whatever games you want, you must download. While theres a good assortment of games smaller than 30GB a piece, Ive downloaded some games that were in the 60-100GB in size! Then just say you run out of space on your Xbox one, so you delete a game but then in a few weeks download it again. Yes it adds up quick. The month is almost over but I just got an email today from my provider saying Ive used 75% of my 1TB cap. So streaming video (HD, UHD) and the rise of these 4K video games, downloaded, patched, or even current or up and coming game subscription services can really obsolete a 1TB cap easy. Providers should source all of their SFP+ and QSFP optics from fs.com for 1/10th of the cost rather than going directly to Cisco, Arris or who ever. Keeping these per port costs down leasen some of that cost per GB, so they should easily be able to up those caps, especially since its a simple as changing the limits in billing with a keyboard. It doesnt use any additional electrical energy for a port to transmit 10tb in a months time, vs 1TB. These caps are an artificial limitation that in all honesty should be made illegal in wireline networks.
Reply | Post Message | MESSAGES LIST | START A BOARD

Duh! 11/27/2018 | 1:55:11 PM
Maybe not unreasonable? Quick back-of-the-envelope calculation. Assuming an equal mix of HD and UHD, we can use 11.3 Mbit/s as the average video data rate. That said, 1 TB of data equates to just short of 200 hours of video, or six and a half hours per day. That's objectively reasonable (even if it's subjectively crazy).

Keep in mind, though that it all depends on the data rate at which the video is encoded. Real world factors tend to push toward lower rate coding.

And operators (and even a few vendors) admit that G(E)PON and DOCSIS 3.1 access networks tend to be very lightly utilized. I've heard those comments quite recently, so this is despite all the Internet video being consumed.

That said, operators are pretty good about increasing caps in response to mainstream market demands. When they see enough Terabyte households, they'll tout their "free" upgrade.