The Company of the Year (Public) award is one of the most sought after of the Leading Lights awards and is always fiercely contested.

This accolade is awarded to the publicly listed firm that "stands out from its competitors, innovates constantly, makes investors proud, and makes employees happy."

This year's shortlisted companies in this category are:

The winners of all 24 Leading Lights awards and the three Women in Comms awards, as well as the identities of this year's Light Reading Hall of Fame inductees, will be announced at the fantabulous Leading Lights dinner/party, which will be held during the evening of Monday, May 14, at the Brazos Hall in Austin, Texas, following a day of pre-BCE workshops. Then, the morning after the awards party, the doors open to this year's Big Communications Event (BCE) at the Austin Convention Center. 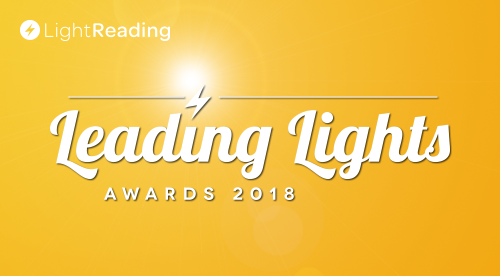 So, let's take a quick look at why these eight companies made the shortlist, keeping in mind the timeframe for this year's Leading lights was from March 1,2017 to the close of entries (so share price gains and movements are pertinent to that timeframe only).

Amdocs
Amdocs is a bit of a machine, having had yet another impressive year as a public company.

In addition to being at the forefront of some of the industry's leading developments -- it is one of the key players in developing products based on the magnetic open source system ONAP and is at the vanguard of machine learning-based customer experience R&D (having launched its SmartBot, the first chatbot with telco-specific intents) -- it has once again expanded its portfolio with strategic acquisitions, such as Vubiquity, a provider of premium content services, digital identity specialist UXP Systems, software services firm Kenzan Media and customer and marketing experience firm projekt202. (See Amdocs Scoops Up Vubiquity in $224M Deal, Amdocs Preps 'Carrier-Grade' Version of ONAP and How to Make AI Smarter .)

The vendor's share price continued to rise, gaining 6.3% during the relevant timeframe, while its revenues for the financial year that ended in Sept. 2017 showed a 3.7% increase to $3.67 billion, while the first two quarters of the current fiscal year delivered revenues of $977.7 million and $992 million. The company continues to be continually profitable at an operating and net income level. (See Amdocs Reports Fiscal Q2 Revenues of $992M and Amdocs Reports Fiscal Q1.)

Boingo Wireless
Boingo Wireless reported record results in 2017, fuelled by its success in DAS, military broadband and carrier offload, with its first quarter of 2018 marking 14 consecutive quarters of double-digit sales growth. Full year 2017 revenues came in at $204.4 million, up 28.3% from a year earlier, though the company is still reporting an operating loss.

Its share price more than doubled during the relevant period to hit $25.97 at the start of March this year.

It is continuing with its strategy of acquiring long-term wireless rights at large-scale venues, building wireless access networks using DAS, Wi-Fi and small cells at those venues, and then monetizing those networks via carrier fees, advertising and more. It added 36 new venues to its network in 2017 and signed 43 Tier 1 carrier agreements to monetize its footprint. New venues added included five major airports in Hawaii and San Francisco's Transbay Transit Center.

It also became one of the first companies to start lab trials for CBRS 3.5 GHz, deployed its NFV systems, began testing multi-carrier small cells, rolled out carrier offload services to the majority of its domestic military bases and airport locations (with one or two carrier customers per location), built out its broadband military business to bring the total footprint to 330,000 military beds on 62 bases, and was named the Best Place to Work in Los Angeles for the third year in a row, as well as receiving a 'Best Tech Work Culture' honor.

Comcast Business
Comcast Business continues to grow at an impressive pace, boosting its full year 2017 revenues by 12.7% to $6.2 billion, adding 135,000 new customers and being one of the key drivers of sales growth at its parent company.

In the past year it has launched a number of innovative services, including its Comcast Business ActiveCore SDN platform, which allows businesses to manage their network through a digital platform and mobile app. Software-defined wide area networking (SD-WAN) is the flagship service and will be added to with further virtual network function (VNF) applications that will run on the same platform.

Comcast Business has also been reaping the benefits of the cable operator's DOCSIS 3.1 investments, with Gigabit broadband now offered throughout the US service area. It also launched SmartOffice, a video monitoring solution designed to improve efficiency for small and medium-sized businesses (SMBs), and enhanced its voice solutions portfolio, including a series of user-experience-improving companion applications for Comcast Business VoiceEdge, including versions for Skype for Business, Google Chrome and Microsoft Office 365.

GTT Communications
Global data network operator GTT has had another year of stellar growth, boosting its full year revenues in 2017 by 57% year-on-year to $827.9 million thanks mainly to the impact of a major M&A spurt  the operator closed 10 acquisitions including those of Hibernia Networks, Transbeam, Perseus and Global Capacity.

But it's not all about M&A deals. The operator has expanded its service portfolio, including SD-WAN and DDoS mitigation offerings, and added many optical and video points of presence to its IP and Ethernet infrastructure. It also added to its headcount and revamped its sales operation to create three distinct units -- Enterprise, Carrier and EMEA. (See GTT Gears for Organic Growth.)

Infinera
After a rough time in 2016 and sales pressures in 2017, the past year has been about turnaround and recovery for optical infrastructure vendor Infinera as its refreshed its product portfolio, launching platforms using its ICE4 optical engine and unveiling its XTM II metro access system: ICE4-based products delivered about 20% of total revenues in the fourth quarter of 2017.

Full year revenues in 2017 were down year-on-year to $740.7 million, but total sales are expected to grow in 2018 as new products continue to drive fresh sales and the first quarter of this year saw revenues hit $202.7 million, up significantly from a year earlier and up sequentially, while gross margins also improved. The company has also re-engineered its R&D process to bring new products to market faster. (See Infinera Reports Q1 Improvements and Infinera Shifts Up a Gear With Its Latest Optical Engine.)

The company's share price has reflected Infinera's struggles and was roughly flat in the March-to-March period, but has performed better since the start of calendar 2018.

Radcom
Radcom is a small company that is punching above its weight. It has focused in the past few years on virtualizing its network probes and expanding its software-based product portfolio, as well as introducing disruptive business models that are attractive to network operators. (See How Radcom's Pricing Model Is Set to Disrupt the Market and Radcom Launches Network Visibility Tool.)

As a result, it is gaining traction with major network operators such as AT&T, attracting other Tier 1 operators and gaining market share. (See Radcom Boasts Another Tier 1 Win.)

That traction is boosting its revenues, which grew by 26% in 2017 to $37.2 million, while gross margins improved and operating income doubled to $2.6 million. Revenues are expected to grow by around 20% year-on-year in 2018.

Its share price has gained slightly but not drastically, gaining about 6.6% to hit $19.50 in the March-to-March coverage period.

Reliance Jio Infocomm
The Indian 4G operator has had a dramatic impact on the mobile services sector in what is the second largest market in the world by user numbers, and is now seeking to transform the fiber broadband and cloud services markets in India too.

Within 18 months of its launch, Jio signed up 170 million customers, a volume it could handle thanks to a fully digital customer onboarding process that was able to process up to 1.5 million new customers per week at its peak.

Now the company is in full operational mode and reporting quarterly profits as well as increasing revenues, despite ongoing price reductions. (See Signs of Fatigue Even as RJio Posts Strong Q4 Numbers and What's Behind RJio's Relentless Price Cutting?)

VMware
As the use of cloud services continues to grow, so VMware benefits from its strategy to provide "seamless connectivity from data center to cloud to edge, while enabling developers with the tools that help them innovate and provide the administrators with visibility, automated controls and security."

In the fiscal year that ended Feb 2, 2018, the company reported a 12% year-on-year increase in revenues to $7.9 billion, noted a 17% improvement in operating margins, and reported a 50% increase in license bookings for its NSX network virtualization platform.

Now VMware, which is majority owned by Dell, is branching out further, into security, IoT and NFV, where it is gaining traction with telcos looking to transform their core networks, while it has also expanded its potential in the CSP market with the acquisition of SD-WAN specialist VeloCloud. (See VMware to Acquire SD-WAN Startup VeloCloud, VeloCloud 'Pours Gas' on VMware's Carrier Ambitions and Why VMware Thinks It Can Help the NFV Cause.)

VMware's stock has reached accordingly, gaining almost 30% in the March-to-March period covered by Leading Lights to hit $116.34 in early March.

Like what we have to say? Click here to sign up to our daily newsletter
Related Stories
COMMENTS
Newest First | Oldest First | Threaded View
Add Comment
Be the first to post a comment regarding this story.
EDUCATIONAL RESOURCES
sponsor supplied content
Monetize 5G with New Business Models
The Journey Toward Successful 5G Monetization Starts Today
Educational Resources Archive
More Blogs from Shades of Ray
Farewell, Light Reading, and thanks!