Hansen Technologies, an Australian billing and customer care software specialist focused on the utilities, telecoms and pay-TV sectors, has struck a C$157 million (US$117 million) deal to acquire Toronto-based Sigma Systems, which provides a variety of OSS and analytics systems to network operators of all types.

Hansen Technologies currently derives most of its revenues from utilities companies, mainly energy companies, with much of its business done in EMEA and the Americas. The acquisition of Sigma Systems will add more than 70 cable and telecom customers across 40 countries to its roster and boost its telecom revenues mix from 17% currently to 38% of total sales (based on 2018 revenue numbers). 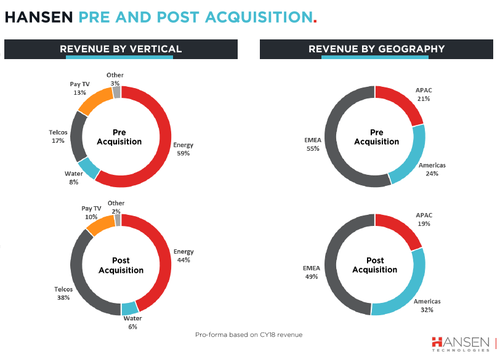 Currently, Hansen regards itself as a strong player in the telecom software sector in the Nordics region only, where it counts the likes of Telia, Stofa and TDC as customers: Once the acquisition is completed, it believes it will have a strong telecom footprint in North America and western Europe (including UK/Ireland) as well as the Nordics.

Sigma, well known for its catalog-driven approach to service development and delivery brought to it by its 2013 acquisition of Tribold, generated revenues of C$73.1 million (US$54.6 million) in calendar year 2018, while its EBITDA was C$18.8 million (US$14 million).

It has more than 480 staff, including some well-known names in telecom software circles such as CEO Tim Spencer, CTO Catherine Michel, Chief Commercial Officer Simon Muderack and Senior VP of Engineering, Brian Cappellani. Michel and Muderack joined as part of the acquisition of Tribold, which they founded.

Hansen is a publicly-listed BSS (business support system) specialist that generated revenues of almost A$225 million (US$159 million) and EBITDA of A$54 million (US$38 million) in calendar year 2018. Its share price stood at A$3.08 (up 2.3% for the day) on the Australian exchange prior to the Sigma news, which was announced after the close of trading.

The deal is set to close as soon as May 31, creating a company with a combined annual revenue run rate of about US$214 million. Hansen has arranged a new bank debt facility of A$225 million (US$159 million) to fund the takeover.

In a prepared statement, Andrew Hansen, CEO of the Australian software vendor, noted: "The acquisition represents a strategic move to enhance our value proposition to the telecom, pay-tv and energy verticals  Bringing Sigma Systems onboard further strengthens our ability to provide valuable solutions to our customer base and creates new expansion opportunities to cross-sell Sigma's software solutions into our broad base of energy customers."

Why this matters
It's a case of scale and strength in numbers. Sigma is a well-respected company that has managed its growth, product portfolio development and reputation well, but it needed M&A activity, either as a buyer or a takeover target, to go to the next level.

This deal, which looks like a good fit in terms of capabilities and customer base, provides new business opportunities to sell Sigma's portfolio into new verticals, provides Hansen with greater international reach and creates what is a sizeable OSS/BSS company with Tier 1 customers that will be able to challenge the likes of Amdocs, Netcracker, Ericsson and others for new business as operators rethink their back-office systems for 5G.

What Hansen needs to do now is prove it's not just a company with a traditional portfolio that can meet the current needs of its customers, but one that understands the next-generation, cloud-native operations and business needs of network operators and large enterprises that are looking for real-time, automated intelligence from software running on hybrid platforms.

James_B_Crawshaw 5/1/2019 | 11:27:36 AM
Scale Hansen will need to make a few more acquisitions to match the scale of Amdocs, Netcracker and Ericsson. There are plenty of options out there but integrating them and turning it into a cohesive offer would be a challenge.
Reply | Post Message | MESSAGES LIST | START A BOARD

[email protected] 5/1/2019 | 1:21:21 PM
Re: Scale Yes, Hansen is nowhere near the same scale but it now has more heft and a combined OSS/BSS proposition that will put in line for more opportunities, I imagine. BUt agree, not yet Premiership status in terms of fire-power...