A decade on, RCS remains a topic of discussion in the US

Rich Communications Services (RCS) technology first surfaced more than a decade ago, when the GSMA was marketing it under the Joyn brand. The association's hope was that operators from Vodafone and Verizon would use RCS to create all sorts of interoperable multimedia messaging features similar to Facebook's WhatsApp  essentially supercharging standard, text-only SMS messaging.

So far, that hasn't happened. But companies ranging from Syniverse to Verizon to Google to Apple continue to discuss the topic anyway.

"We're happy to work with Apple to make RCS interop a reality," tweeted Google's Hiroshi Lockheimer this week. Lockheimer is Google's SVP of platforms and ecosystems, and is in charge of the company's Android smartphone operating system.

In a series of messages, Lockheimer basically begged Apple to support the RCS standard in its iMessage service. "Supporting RCS would improve the experience for both iOS and Android users alike. That's right, RCS will also improve the experience and privacy for iOS users," he wrote. "By not incorporating RCS, Apple is holding back the industry and holding back the user experience for not only Android users but also their own customers."

Apple's iMessage is the default messaging app in its iPhones, and it only supports SMS messages and not the multimedia capabilities of RCS. Moreover, it delineates between iMessages and SMS by coloring the former blue and the latter green.

Lockheimer argued that Apple's approach to iMessages amounts to "peer pressure and bullying."

Lockheimer's statements follow a lengthy Wall Street Journal story on the growth of Apple's iMessage among teens and young adults in the US. The publication cited data from Consumer Intelligence Research Partners Globally showing that roughly 40% of Americans use iPhones, but that figure skyrockets to 70% among users between the ages of 18 and 24. The publication reported that a major draw is Apple's iMessage. "I've had people with Androids apologize that they have Androids and don't have iMessage," one 20-year-old told the publication.

According to documents released in conjunction with the lawsuit between Epic Games and Apple, the iPhone maker considered offering an iMessage app on Android in 2013, when Google was rumored to be interested in acquiring messaging service WhatsApp. However, Apple executives, including Phil Schiller, argued against such a move. "Moving iMessage to Android will hurt us more than help us," Schiller wrote in an email.

Apple, though, appears content to maintain its iMessage strategy. "With iMessage we built a great service that our users love and that is different from those offered by other platforms," the company said in a statement to the WSJ.

Google moves against other app stores

It's worth noting that Google has a mixed track record in RCS specifically and lock-in strategies in general.

First, as noted by Ars Technica's Ron Amadeo on Twitter, Google has launched 13 separate messaging apps since iMessage came out in 2011. Most have been discontinued.

Second, Google has worked to prevent smartphone makers and wireless network operators from launching their own Android application storefronts. As noted by Mashable, documents in the Apple-Epic lawsuit also showed that Google, starting in 2009, began offering wireless network operators 20-25% of the fees the company collected from its Android app sales specifically so they wouldn't launch their own app stores.

Nonetheless, the discussion around RCS is noteworthy considering Verizon appears poised to launch some kind of RCS service in 2022. The company said as much last year when it announced a new collaboration with Google "to expand advanced messaging services to Android users in the US starting next year using the Messages by Google app. The service is based on the Rich Communications Service (RCS) standard, which provides a more interactive and modern messaging experience right from Messages by Google." 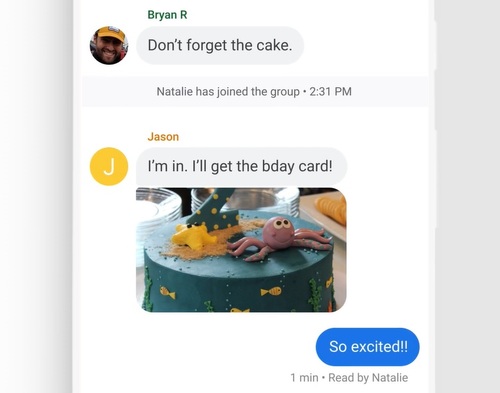 Google touts features on its Messages by Google app including support for pictures and other high-quality media.
(Source: Google)

In November, RCS platform vendor Synchronoss Technologies confirmed that it inked a new RCS agreement with Verizon during its 2021 third quarter. "We're now working with  closely with Verizon to prepare for the launch of their RCS messaging expansion," Synchronoss' Todd Kehrli said during the company's quarterly conference call, according to a Seeking Alpha transcript of the event.

Synchronoss was the vendor powering the Cross Carrier Messaging Initiative (CCMI) launched in 2019 by Verizon, AT&T, T-Mobile and Sprint. The effort was designed to bring RCS to the US. However, that venture fell apart in 2021, though the companies involved in the venture continued to voice support for the RCS standard.

"We remain confident that our messaging platform will be used in the US, as well as globally, as more operators and brands understand the many benefits of RCS," Synchronoss CEO Jeff Miller told Light Reading in August 2021, shortly after Verizon announced its agreement with Google for RCS.

Despite the movements by Verizon, Google and others toward RCS, at least one analyst continues to believe that RCS will remain a discussion topic and not much else.

"There is almost no consumer pull for RCS," Disruptive Wireless analyst Dean Bubley wrote on LinkedIn in response to Lockheimer's comments. "The mobile industry (& Google) doesn't realise that ubiquity is earned, not mandated. RCS is & will never be ubiquitous to the same degree as SMS (or browsers). It's a lower-than-lowest denominator."

He also argued that Google is more interested in RCS as an advertising and marketing channel rather than a new way to connect mobile users.

Indeed, Verizon hinted at that type of service in its RCS announcement with Google last year. "Businesses will also be able to build and manage messaging to more effectively reach their customers. RCS will allow Verizon Android users the option to easily connect with businesses to purchase products, make reservations, ask questions and more," the company wrote.