Why AT&T's capex dipped during COVID-19, and what's next

Airline pilots, bartenders and school-age children weren't the only ones who found themselves twiddling their thumbs during most of 2020. AT&T's bean counters also took a bit of a break during the year of the coronavirus.

According to new figures from research and consulting firm GlobalData, COVID-19 did slow telecom network capital investment in the US, and AT&T was the primary culprit for the decline. 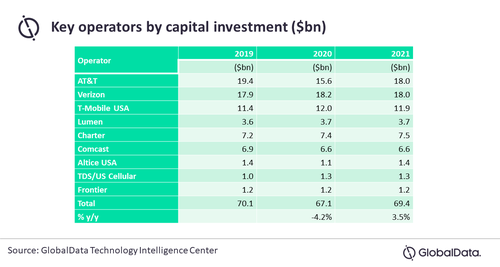 Click here for a larger version of this image.
(Source: GlobalData)

The answer shouldn't come as much of a surprise. "Essentially with AT&T there are two major priorities they are trying to balance: capex to support wireless and broadband priorities, and market expectations regarding free cash flow which determine in part what dividend they will deliver," wrote GlobalData analyst John Byrne in response to questions from Light Reading. "The struggles they faced at WarnerMedia that were mostly COVID-19 related, as well as the challenges at DirecTV, did pull down EBITDA [earnings before interest, taxes, depreciation, and amortization], and in that context capex is a pretty easy lever to pull to keep FCF [free cash flow] within target."

Meaning, AT&T eased up on its network spending to cover for the pandemic-driven movie theater shutdowns that affected its WarnerMedia division, as well as the continued slowdown in its DirecTV satellite TV business amid the shift to streaming services like Netflix. AT&T's massive debt load, accumulated through the purchases of DirecTV and Time Warner, probably didn't make things easier.

"We brought our debt down by $30 billion through the end of last year," noted outgoing AT&T CFO John Stephens during an investor event earlier this month, according to a transcript from the company. "We were very successful in that."

AT&T's capex pullback is noteworthy considering 2020 was when Verizon pledged an extra $500 million in capex at the beginning of the pandemic to handle increased coronavirus-related network traffic. T-Mobile also kicked off its five-year, $60 billion network-upgrade program in 2020 following the close of its purchase of Sprint.

However, per GlobalData's forecasts, 2021 is looking much different.

"The good news  especially for supporting infrastructure vendors  is that capex looks likely to improve modestly in 2021," Bryne said in a release. "Factoring in available operator guidance, GlobalData estimates that next year's spend by these US operators will be up by approximately 3.5%. That would return full-year investment to $69.4 billion  just below the $70.1 billion these operators spent on capex in pre-pandemic 2019."

For AT&T, that spending will focus on two main themes in its network: 5G and fiber. Indeed, AT&T plans to deploy fiber-to-the-premises (FTTP) to another 3 million-plus residential and business locations across more than 90 metro areas in 2021, and is already sizing up plans to push that to an additional 4 million locations in 2022. Separately, the operator pledged to spend $6-$8 billion over the next few years deploying the C-band spectrum it purchased for 5G.

"We have a clear path to deleveraging our business through a thoughtful and dedicated capital allocation process," said AT&T's new CFO, Pascal Desroches, during the company's analyst event earlier this month, according to a company transcript of the event. "Our investment priorities of 5G, fiber and HBO Max and continued operational transformation sets the stage for a focused, purpose-driven company, a company that is investing and focused on growth and creating value for both our customers and our shareholders."

Interestingly, AT&T said it is also benefiting from the ongoing cost-cutting program that the operator hopes will trim $6 billion from its budget by 2023.

That program was designed by Bill Morrow, who AT&T hired in 2019 as its "special adviser and managing director of process service and cost optimization."

However, Morrow was recently put in charge of AT&T's US video unit following the company's new deal with TPG Capital earlier this year.

AT&T officials explained that the cost-cutting program will continue. "Those plans are set. They are literally now in the point where they can be handed off to the operating people who have to go make them happen," explained AT&T CEO John Stankey.

He continued: "We've now put an individual over-the-top of that [who] is responsible for making sure that we execute well on that. And it happens to be an individual who also has responsibility for capital allocation and our operating plan to ensure that we're funding those things appropriately to get the work done, that we get it done once and for all. We collapse the systems, we get the network in the right way. And so we're now in an execution phase."