US House passes Biden's infrastructure bill with $65B for broadband

The bill passed by a vote of 228-206, with 13 Republicans joining most Democrats to push it over the finish line. Here's how the $65 billion to close the digital divide breaks down:

Friday's vote comes over seven months since Biden first proposed a nearly $2 trillion infrastructure package, with $100 billion for broadband, and three months after the Senate passed a slimmer version of it. The bill contains a win for the cable and wireless industries on the speed front, with an underserved community defined as one lacking 100/20 Mbit/s service, despite an initial push from fiber advocates for symmetrical speeds of at least 100/100 Mbit/s. 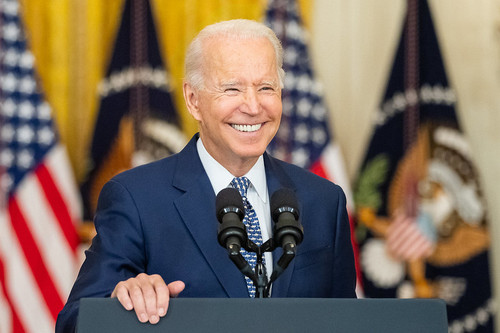 "No parent should have to sit in a parking lot of a fast food restaurant so their child can do their homework," said President Biden in a speech on Saturday about the bill's passing, noting that the infrastructure bill will make "high-speed Internet available and affordable everywhere in America."
(Source: White House via Flickr)

The Wireless Internet Service Providers Association (WISPA), which lobbied for a "tech-neutral" approach to the bill rather than one that favored fiber, said: "WISPA's members connect communities in the toughest reaches of America, and we worked hard with congressional leadership on both sides of the aisle to make sure all technologies remain available to bring high-quality, ever-evolving internet connectivity to all Americans. This 'open toolbox' approach will help consumers by driving innovation and keeping internet plans affordable and accessible to all."

Pew Charitable Trusts pointed to the mechanics of the bill, which allows states to take the lead on directing funds.

"This legislation reflects years of research from Pew and others showing that funding alone isn't enough to bridge the digital divide," said Kathryn de Wit, director of Pew's broadband access initiative. "Now the operational support provided by the bill will help state governments collect data, draft broadband plans, and coordinate with partners to increase high-speed internet access. These evidence-based activities, informed by the progress state and local leaders have already made over the last several years, will guide how federal funds are used to expand broadband access across the nation."

What ultimately comes from the broadband bill rests on a few things. To start, the Senate still needs to confirm President Biden's nominations for the FCC and NTIA, which are both charged with carrying out crucial provisions of the legislation. The FCC is further tasked by the 2020 DATA Act with revamping the country's broadband map, which undercounts the digital divide by tens of millions of Americans, according to estimates from organizations like BroadbandNow and LightBox. A new national map will be critical for accurately directing funds to unserved and underserved areas.

In a note to members on Saturday, Gary Bolton, president of the Fiber Broadband Association, called the legislation "historic" but also noted the work ahead:

"We now need to move our focus from Congress to NTIA and the state and local level. Only 26 states currently have broadband offices, and other states have a designate, which is typically a multi-agency broadband task force. And, while 40 states currently have broadband programs, these state broadband programs vary widely," he said. "FBA will be working closely with both NTIA and the FCC in 2022, and we anticipate a high level of activity as the [Notice of Funding Opportunity] is under development, with no shortage of pushback from industry groups that view fiber as a threat."

On Friday afternoon, when it was still unclear if the House had enough votes to pass the infrastructure package without moving it forward simultaneously with the president's Build Back Better social spending bill, House Majority Whip James E. Clyburn (D-SC)  one of the leaders on the broadband legislation front  told the press that attending to the digital divide was reason enough to pass the legislation immediately, noting that without it, rural states like his won't be able to have telehealth, online learning, or even on-time shipping for their local businesses.

"Broadband alone is a big, big deal for me," he said.