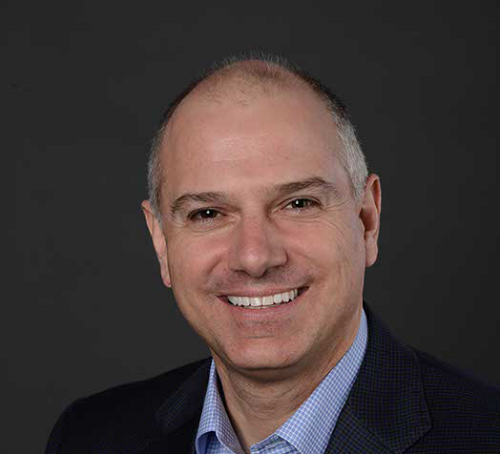 The telecommunications industry is marking the 50th anniversary of the invention of low-loss optical fiber, marveling at the amazing progress in optical transport technologies and their revolutionary impact on people's lives. However, much of the rest of the world takes "bandwidth" for granted, as they do the air we breathe and water we drink, and continue to consume the bandwidth provided by optical transport at an exponential rate, assuming that more bandwidth will always be available.

As we all witnessed, the global COVID-19 pandemic over the last 18 months has only accelerated the demand for bandwidth, as people worked, were educated, and even socialized, online at home. Figure 1 shows the daily IP traffic in AT&T's network in 2020, illustrating the equivalent of three years of growth in bandwidth utilization within only one week last March. Although the pandemic and lock-downs hopefully will end in 2021, people's online habits and consumption of bandwidth likely have been altered for the foreseeable future. Significant fractions of the workforce are anticipated to continue to do their jobs remotely, at least several days per week. 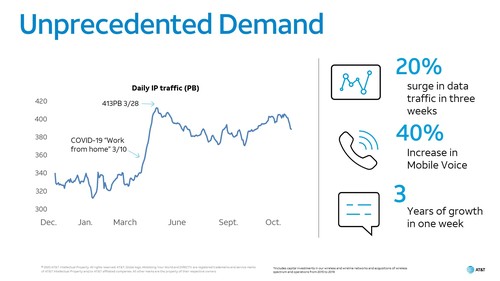 In addition to bandwidth demand driven by our active use in the home, the Internet of Things (IOT) continues to drive consumer broadband demand. Every second, 127 new IoT devices connect to the Internet (Source: McKinsey Global Institute), and consumer electronics account for approximately 63% of all installed IoT devices (Source: Statista). By 2025, the IoT data volume is projected to be 79.4 zettabytes (Source: Statista). And, despite the recent focus on doing work and school from home, people are anxious to return to living in a mobile and global world, where they expect the quality of their mobile connectivity, while "on the move," to be equivalent to what they experience at home on Wi-Fi. The adoption of 5G and, in the future, 6G will require further densification and more fiber to connect the small cells for fronthaul, while 5G and 6G are anticipated to also generate significant increases in backhaul traffic over optical fiber.

In the 25+ years since the first optical amplifiers were deployed, enabling wavelength-division-multiplexing and elimination of frequent optical-electrical-optical regeneration, the pace of innovation in optical transport has been very rapid, allowing available capacity to stay ahead of demand. Today, optical systems can operate within a dB of the Shannon limit, and experts agree that moving even fractions of a dB closer to that limit will require very significant effort. Existing technologies could be further developed to achieve incremental improvements in optical transport capacity. For example, higher symbol rates (e.g. greater than 200GBaud), higher order modulation (e.g. 256 QAM), expanding the transmission band (e.g. to include S-band), utilizing hybrid-Raman amplification ubiquitously, enhanced nonlinear compensation, along with smaller CMOS node size (e.g. from current 7nm to 5nm to 3nm and smaller) are possibilities well-known in the industry.

However, the aforementioned technologies have limited prospects to continue to scale to meet the projected optical transport demand of 20+ years from now. A technology disrupter will likely be needed. As an example, the adoption of coherent detection with digital signal processing for long-haul optical transport was that disrupter in 2008, when direct-detection systems operating at 40Gb/s per wavelength were facing severe limitations. Digital coherent detection has also been adopted for metro applications, and as bit-rates climb, it is being considered for future shorter-reach applications, including "coherent-lite" within the data-center, assuming that the cost of coherent can be scaled appropriately.

Based on recent research in fiber-optics communications, we can speculate that a possible disruptor could involve one or more new technologies. Hollow-core or micro-structured fibers, where light is guided through a hollow region of air rather than through the silica glass core in conventional fibers, have been explored in research for over 20 years. Their attributes include low latency and low nonlinearity (i.e. high power can be launched into the fiber to increase the signal-to-noise ratio) Within the last two years, the loss of hollow-core fibers has been reduced significantly, and hollow-core fibers have been cabled, paving the way to potential broader applications beyond high-frequency trading. New optical materials are continually being explored, as alternatives to conventional Indium Phosphide and the more newly adopted Silicon Photonics. The search is also on for new material systems that can be integrated into Silicon Photonics. In addition, a break-through in optical amplification could enable scaling the optical transport capacity. Practical all-Raman amplification or the development of compact, inexpensive optical amplifiers that could be placed at short distance intervals could enable a nearly "transparent" optical fiber from a loss perspective.

On the other hand, full utilization of the information retrieved by the coherent receiver and possibly the use of machine learning could allow continuous monitoring of optical channels and the adjustment of their bit rate to maximize their capacity at all times, without the need to maintain a static margin of 2 or 3dB. Finally, the research community has been exploring space-division-multiplexing for more than 10 years. Much progress has been made, although multi-core and multi-mode fibers face significant challenges before wide-scale deployment could be considered. Utilizing multiple parallel optical fibers in a "multi-rail" system offers many advantages and linear scaling of the optical transport capacity. However, in order to lower the cost-per-bit, significant development efforts are needed to enable amplifier arrays, sharing pumps across multiple fibers, and packaging efficiencies.

Finally, when considering which technology could prove to be the disruptor, it is important to note that many optical innovations do not progress from research to commercialization, due to initial technology limitations, and are set aside. Several of these innovations have been later "rediscovered," when an enabling technology has advanced, and then commercialized and deployed, leading to large increases in optical transport capacity. Coherent detection with digital signal processing is a prime example. Therefore, we must use quotes in our conclusion that "new" technologies will likely be needed to increase optical transport capacity, along with further integration to lower optical transport costs.