Wholesale operator Telia Carrier said it has become one of the first major network operators to use a new network architecture called routed optical networking.

In this network, the carrier's routers would be connected, hop-by-hop, over wavelength division multiplexing (WDM) links with pluggable optical transceivers. To oversimplify, Telia Carrier will benefit from no longer having to separately manage an optical network and an IP network to provide 400 Gbit/s of connectivity over short distances. 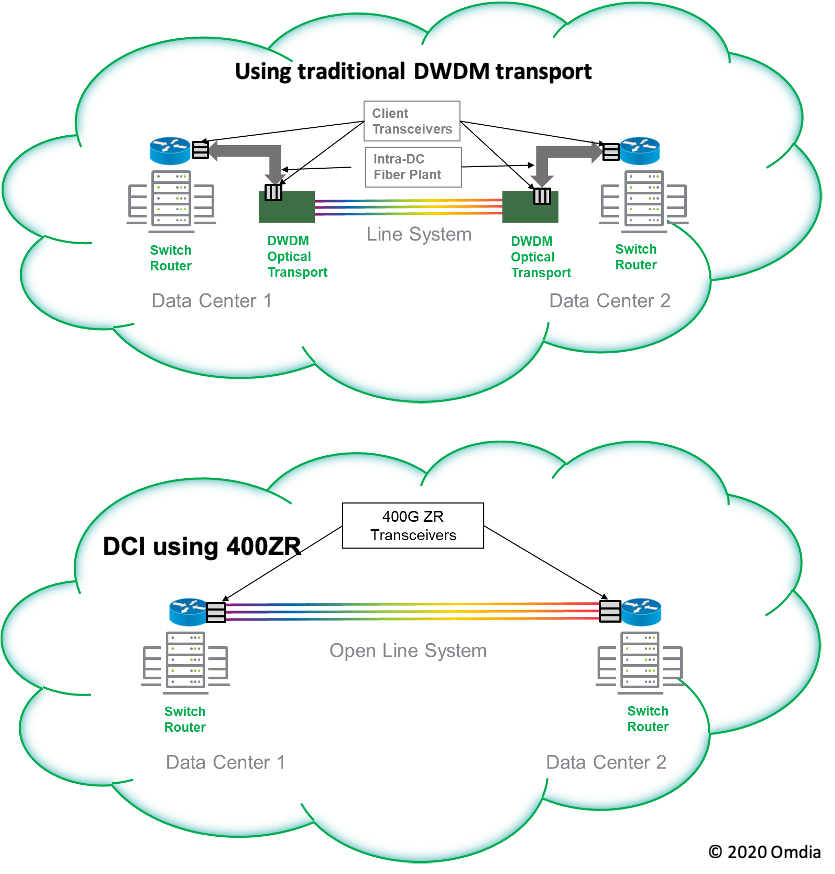 "Using Acacia's 400G coherent modules that are plugged directly into Cisco routers, this architecture will enable Telia Carrier to address increasing bandwidth demand while significantly reducing both capital and operational expenditures," the company said on Wednesday.

The routed optical network, once called IP-over-WDM, has been talked about for years and two key developments make it possible now, according to Telia Carrier's head of Network Engineering and Architecture, Johan Gustawsson, who emailed Light Reading.

First, the size of the optical modules works out: The client-side and line-side optics are the same sizes. A carrier can use "a single router blade (fixed or line card) and mix-and-match local, metro and long-haul circuits with the very same building block, as opposed to having two discrete devices or router blades," Gustawsson said.

The second reason has to do with the advancements in silicon. Switches and routers now have "bandwidth and power-optimized silicon (that), in many cases, allow for a full blade to be all populated with 20W modules," Gustawsson writes. Again, to oversimplify, the bandwidth bottlenecks inside and outside of routers have largely been solved, and silicon and optics had to be combined so that the capacity of individual routers and switches could keep growing.

Acacia, a leader in the market for 400ZR pluggable optics, is popular among webscale cloud providers as they're huge consumers of 400ZR modules and all other kinds of components that allow high-speed, low-cost, huge-throughput connections between data centers.

"We knew, with 400ZR, that hyperscalers like Microsoft were interested in the architecture  they pioneered it," said Sterling Perrin, senior principal analyst at Heavy Reading. "The question has been: 'Will it take hold in telecom?' With Telia Carrier, we have a very early indication that, yes, the architecture will impact telecom."

For Cisco, which said it would buy Acacia last year for $2.6 billion (status: still pending), the Telia Carrier news is a continuation of its years-long push toward a time when IP-over-WDM was possible and practical.

As Gustawsson hinted earlier, previous iterations of IP-over-WDM were slowed by optics that were too big and vendor solutions that weren't flexible enough. "Cisco's point of view was that if you put a switch and a router everywhere, then you wouldn't need things like ROADMs and crossconnects," said Scott Wilkinson, the lead analyst for optical and packet transport hardware at Cignal AI.

Now, things are much different, according to Andrew Schmitt, founder and directing analyst at Cignal AI. "There are open software standards for interfacing different transport vendors equipment, open line systems that allow different transponders to be used, and optical interface compatibility via OIF 400ZR, OpenROADM, and OpenZR+." That makes vendor lock-in less of a risk for carriers, and it pits components and systems vendors against each other, in some cases.

When interconnecting data centers and in metro applications, having pluggable optics in the router will, for shorter distances, eliminate the need for a separate transponder. That convergence, plus the Acacia ownership (assuming it closes), gives Cisco some influence in the combined market of optical systems and routing.

And, in a routed optical network, routing vendors and optical transport vendors will find themselves fighting over turf, too. It's too soon, perhaps, to quantify that battle, but this is "definitely is a long term threat to the transport guys. There's no doubt about it," Cignal AI's Schmitt said.

Earlier this year, Verizon announced a trial involving Ciena WaveLogic 5 Extreme (WL5e) coherent optics and Juniper switches. The technology test allowed Verizon to move 800 Gbit/s of data on a single wavelength, a move that, the carrier said, showed its "evolution to a more software-driven and automated network."

Also this year, Verizon's media group completed a demonstration this year that consisted of adding an Inphi 400ZR module from an Arista 400G switch to a 100GHz DWDM channel without affecting any of the existing 100GbE waves. The demonstration showed that silicon optics, plugged straight into switches and routers, can add more fiber capacity while reducing Verizon's cost to transport each bit. "Verizon Media is advancing the disaggregation of optics, switching, and optical line systems in preparation for an enormous surge in data-driven by cloud, HD video and 5G applications," components vendor Inphi said in a statement.

Like what we have to say? Click here to sign up to our daily newsletter
COMMENTS
Newest First | Oldest First | Threaded View
Add Comment
Be the first to post a comment regarding this story.
EDUCATIONAL RESOURCES
sponsor supplied content
Routed Optical Networking - A Transformative Architecture of Network Layer Convergence
White Paper:  Stop Threats Inside and Outside your Networks
White Paper: Cisco 8000 Series Routers: Trustworthy Hardware Designed to Protect Against Threats and Attacks
Modernize the Edge of Your Network to Support the Internet of the Future
White Paper: IOS XR7: The New Operating System that is Thin, Fit and Modern
Educational Resources Archive
More Blogs from The Philter
An inside look at AT&T's 5G and fiber focus