Nokia's FP4 was always going to be a hard act to follow. Launched in 2017 at a glitzy event in San Francisco, the 2.4Tbit/s network processor was hailed as the fastest ever, six times more powerful than anything else on the market. Since then, the Internet Protocol (IP) equipment it feeds has remained a strong performer for Nokia, with sales up 15% for the first six months on a constant-currency basis.

Today's release of the FP5 is certainly a more subdued affair, one that seems to befit the age of pandemics, geopolitical ruction and climate crisis. Gone are the splashy headlines about leapfrogging design generations, beating rivals and making inroads with the Internet giants. Power efficiency and security, the main selling points now, speak more quietly to concerns about energy costs and cybercrime.

But if this update is more incremental in nature, it is not unimportant. The promised efficiency benefits over the FP4 appear substantial  a 75% reduction in power consumption along with a threefold increase in capacity. What that boils down to is just 0.1 watts per gig, down from 0.4 watts on the FP4, says Heidi Adams, Nokia's head of IP and optical networks marketing.

The FP network processor family through the years 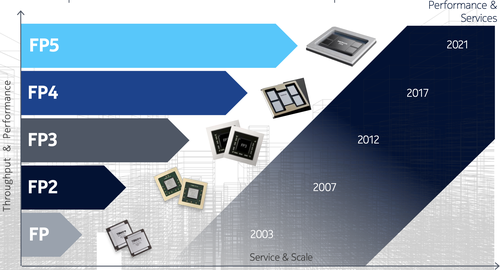 How has Nokia done it? Partly, it seems, by moving to a 7-nanometer design from 16 nanometers previously. Most of the improvement, however, has come from consolidating the different chips used in the FP5 family and removing some of the traces between them. "That offers a really big reduction in power consumption," says Adams.

On security, Nokia has also baked additional capabilities into the FP5 that did not feature in the FP4. Months before that chip was announced in 2017, Nokia had acquired an analytics firm called Deepfield with its own DDoS (distributed denial of service) protection technology. It has enhanced that system and added something called ANYsec, a standards-based system that provides security for Layers 2 and 3 missing from the FP4.

The processor is intended for routing platforms that Nokia expects to begin shipping to its service provider customers starting in the first half of 2022. "You can mix and match earlier-generation FP4 with FP5 and don't need to replace the chassis and power and fans," says Adams. "It is easily upgradeable for service providers."

No mention of Internet giants

There is no chatter this time around, however, about sales to webscale giants, which featured prominently in a discussion about the FP4. Back then, Steve Vogelsang, Nokia's chief technology officer for IP and optical networks, said that the development of the FP4 had been driven largely by webscale requirements. Nokia's engineers even appeared to have engaged with those firms in designing the FP4.

Adams insists the FP5 is a "great offer" for webscale operators that want the same "deterministic performance" as Nokia's traditional customer base. What's clear, though, is that merchant silicon, rather than purpose-built chips, is satisfying a lot of the webscale demand. Nokia began catering to this market as recently as July 2020, when it unveiled a switching line of products aimed at hyperscalers and announced Apple as a customer.

But the mainstream market's need for purpose-built silicon remains strong, according to Adams. "We have identified there is a specific requirement for a type of silicon that has deterministic performance," she says. "If you have to do quality-of-service assurance for end customers that are paying for it, it has to be bulletproof. It is a different set of requirements."

Analysts sound less convinced that purpose-built silicon occupies an entirely different space. "In general, I think the same battle between commodity hardware and white boxes and dedicated routers continues," says Simon Stanley, a principal consultant for Earlswood Marketing and analyst-at-large for Heavy Reading (a sister company to Light Reading). "One significant change is that proprietary routers need to work seamlessly with a wider ecosystem, including open-source software and cloud infrastructure."

Nokia announced its own support for SONiC, an open-source networking operating system based on Linux, back in May 2020, Adams points out. "In terms of open networking, the ability to provide open APIs and be managed by different systems  all that capability is built into the broader portfolio."

Missteps in the 5G mobile market have clearly dogged Nokia for a couple of years. Finding fault with its IP and optical networks strategy has been much harder, though. The network infrastructure division to which those products belong has been the high-flyer for Nokia so far this year, with first-half sales hitting 3.5 billion ($4.1 billion), up 24% year-on-year in constant currency terms. Its ability to sustain those good results will be the FP5's ultimate measure of success.