DriveNets, a routing startup founded in 2015, is now powering one of the largest telecom networks in the world, the company said today.

Nearly a year ago, AT&T announced it was making a significant step toward reshaping its network for decades to come. The carrier contributed an open source specification for a distributed disaggregated chassis (DDC), based on Broadcom's Jericho2 processors, to the Open Compute Project (OCP). AT&T joined the OCP back in 2016, as a formal acknowledgment that it was accelerating its push to build a more software-centric network. 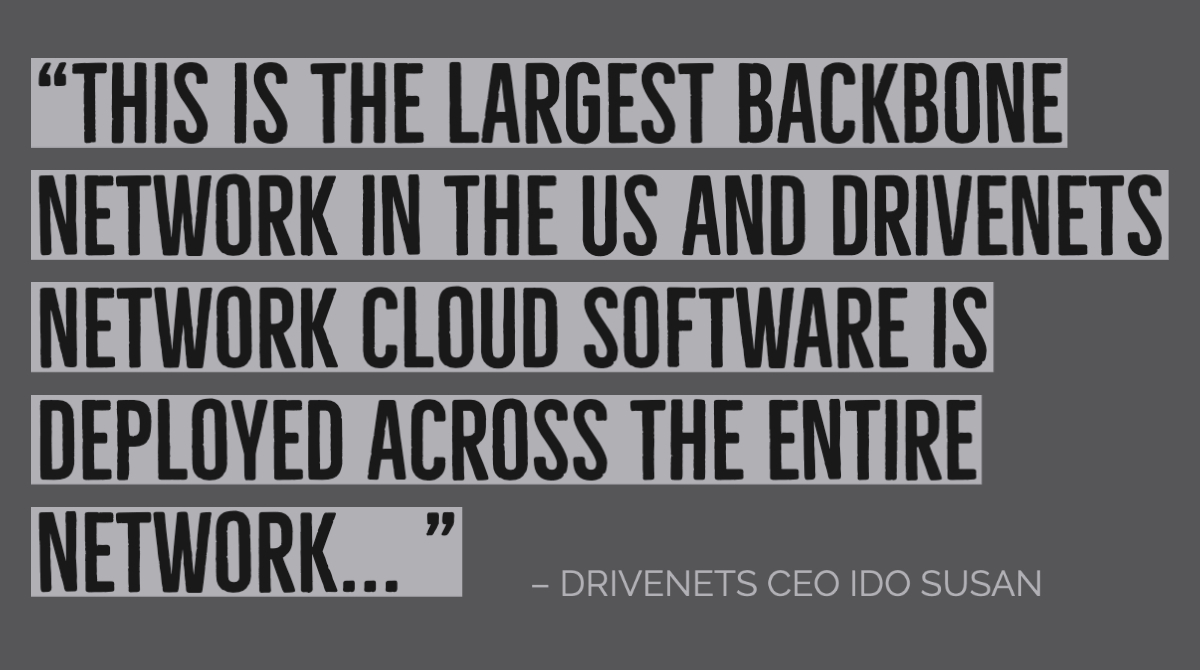 DriveNets claimed to be the first company to meet AT&T's DDC spec as written. DriveNets can now back up its claim; the company is finally telling the world it is officially supplying its DriveNets Network Cloud solution to AT&T.

The architectural change AT&T is taking here is not trivial. This cloud-native approach designed by DriveNets (and, obviously, endorsed by AT&T) takes the individual, physical instances of routers in a network and makes them behave as a single, shared resource. One assumes if the carrier can see its routing capacity in a much different way, all at once, it better could optimize routes, handle traffic more efficiently and lower its operating costs.

"This is the largest backbone network in the US and DriveNets Network cloud software is deployed across the entire network, running over multiple large white box clusters in many core and aggregation locations of the AT&T network," writes DriveNets' CEO and co-founder Ido Susan, in an email to Light Reading. "Each one of these large clusters contains 192 white boxes from UfiSpace. The DriveNets Network Cloud Network Operating System (NOS) turn these large clusters of 192 white boxes into a single router entity. These large router entities are deployed in many locations at the AT&T network."

The UfiSpace white boxes are based on the Jericho2 chipset from Broadcom, per AT&T's original DDC spec.

Let's take a moment, too, to reiterate that Broadcom, UfiSpace and DriveNets are all completely independent companies providing an integrated core routing system for AT&T. This was unheard of just a few years ago. "This is the beauty of the distributed model  the hardware and the software are sold separately by different providers," writes Susan. "AT&T can choose any networking white box manufacturer that complies to the DDC model."

This is an incredibly significant deal for DriveNets, which has raised over $100 million in funding to date just so that it could scale up its efforts and support and be taken seriously by major carriers.

"The experience gained in deploying the network solution of the largest backbone in the US is very valuable in maturing the DriveNets solution and ensuring its scale and carrier-grade quality," Susan writes to Light Reading. He said this makes the company "ready to support any other network in the world."

It's also worth noting that service providers aren't the only ones who need cloud-native routing solutions that can scale to handle massive traffic demands. Hyperscale cloud providers and other Tier 1 carriers are very likely watching this deployment closely, as are routing competitors. Competitors like Arrcus have recently offered a targeted technology configuration for the cloud networking space. Arrcus recently said that its cloud-native distributed routers could provide "highly available connectivity for workloads and data with hyperscale performance and security across any cloud, any region, and any site."

In AT&T's case, the combo of Broadcom, UfiSpace and DriveNets gives it a white box system that has a 40 x 100G line card system, a 10 x 400G line card system, and a 48 x 400G fabric system. "These building blocks can be deployed in various configurations to build routers with capacity anywhere between 4 Tbps to 192 Tbps," the carrier wrote in a blog post today, acknowledging the DriveNets announcement.

And AT&T also said there's plenty more to come since it has worked to make sure that specific hardware configuration is not just a one-off application. "In the coming weeks, we'll announce additional software suppliers for other use cases operating on the same hardware, demonstrating the maturity of the eco-system and power of openness," said Andre Fuetsch, AT&T's CTO of Network Services, as quoted in the blog post.