Cisco carves away at enterprise WAN complexity with new routers

In its latest efforts to take on growing complexity in enterprises' wide area networks and connect multicloud environments, Cisco is launching a new series of edge devices  the Catalyst 8000 Edge Platforms and Catalyst Cellular Gateway.

Cisco has given its ISR and ASR routers a refresh with the Catalyst 8000 series to provide connectivity and security features in the data center, branch and edge.

Brandon Butler, Senior Research Analyst of Network Infrastructure for IDC, says this is an important update to the ASR and ISR group of routers at a time when enterprises increasingly need to efficiently connect to the cloud and also access managed SD-WAN services.

"If you think about what enterprises are trying to do with their wide area networks today, there's an expanded group of challenges in terms of efficiently connecting to the cloud and enabling SD-WAN management," says Butler. "These new Cisco routers are designed with those things in mind, and Cisco and their customers can use these routers as a base for deploying Cisco vManage SD-WAN software." 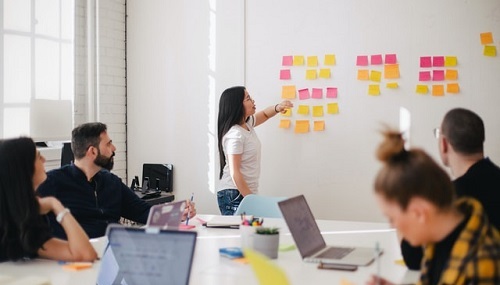 The Cisco 8000 series aims to decrease complexity in enterprises' WANs, freeing up time for more meetings about the importance of color-coding Post It notes.
(Photo by You X Ventures on Unsplash)

Archana Khetan, senior director of product management for Enterprise Routing & SD-WAN Infrastructure in the Intent-Based Networking Group for Cisco, says that many of the early testers of the Catalyst 8000 platforms include service providers as a majority of the devices will likely be deployed as managed services by operators.

In addition to the new routers, Cisco launched the Cisco Catalyst Cellular Gateway, which Khetan says provides customers with an additional gateway choice. The Cradlepoint gateway was previously the only option for customers. The Catalyst Cellular Gateways provide customers with the ability to add cellular connectivity such as Advanced 4G LTE CAT 18, and eventually 5G, as the primary or backup links to their SD-WANs.

On top of routing traffic, Cisco says the Catalyst 8000 series integrates with Cisco Umbrella to provide a cloud-native service that includes on-premise and cloud security and integrates networking functions. The devices are also open and programmable, users have access to Cisco's API library and the appliances support container-based microservices for applications from Cisco and third parties. The Catalyst 8000 series connects to the Cisco SD-WAN Cloud OnRamp to access cloud applications from AWS, Google and Microsoft Azure.

Cisco is launching three models under the Catalyst 8000 group:

IDC's Butler says that one thing that stood out to him about these new routers is providing enterprises with "the ability to have common WAN management across disparate points across the network. Not just Cisco, but all the enterprise networking vendors we track, are trying to offer cohesive platforms that work across these different points in the network... from an enterprise perspective, having common policies across these different areas of the network has advantages from a management perspective."