Fiber push in UK might bode ill for BT

For years, the UK seemed to lack so much as a single firm prepared to shoulder investment in full-fiber networks. Suddenly, a broadband queue has formed. Besides BT, the former state-owned monopoly, it includes the likes of CityFibre, Gigaclear, Hyperoptic and the newly merged Virgin Media O2. Even Russian oligarch Mikhail Fridman is reportedly keen to invest, and in the relative backwaters of Norfolk and Lincolnshire, of all places.

Money men have cottoned onto the fact that broadband infrastructure offers a stable, guaranteed source of income. The pandemic, they realize, has made coping without access to residential broadband nearly impossible. Even before coronavirus, BT was under pressure from rivals such as CityFibre, backed by Goldman Sachs funds. A carrot-and-stick approach by regulatory authorities has made the incumbent operator double down on full fiber. 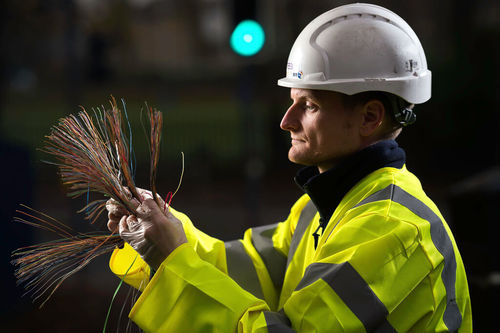 BT aims to pass 25 million homes with full-fiber networks by 2026.

Yet the UK remains a long way behind most of Europe on full-fiber availability and take-up, while BT has more to lose than gain from a transition to the higher-speed technology. A ranking of countries published by the FTTH Council Europe, a lobby group, and prepared by IDATE, a French market-research firm, put the UK in the bottom three last September, when just 15% of homes were covered. Only Greece and Belgium did worse.

BT can no longer fairly be accused of having a workshy attitude. Its full-fiber network reached 4.61 million homes in March, up more than 2 million in the previous year, and its capital expenditure rose 6%, to £4.2 billion ($6 billion), over the same period. It suspended dividends to fund the rollout and saw its profits drop 15%, to about £1.5 billion ($2.1 billion), in its last fiscal year.

Despite all the recent BT activity, the UK was only the fourth fastest-growing market in the year to September, according to IDATE, trailing Russia, Italy and Germany on rollout. IDATE also reckons it has more work left to do than any country in Europe bar Germany. Policymakers worry that a fiber lag could leave the island nation at an economic disadvantage to Europe post-Brexit.

They will be encouraged by the wave of broadband investment now washing over the UK. Reporting by the Financial Times newspaper indicates that Virgin Media O2 may seek to extend its cable footprint by around 8 million properties, from about 16.3 million in March. CityFibre is apparently investing £4 billion ($5.7 billion) to cover 8 million homes, while Upp, the firm backed by Mikhail Fridman, has an eye on 1 million premises in Lincolnshire and Norfolk.

Pressured by rivals and regulators, BT itself now plans to cover 25 million properties by December 2026, about 5 million more than it was originally targeting. But this will force it to pass about 4 million homes annually, doubling the rollout rate it managed last year, and cost about £15 billion ($21.3 billion) in capital expenditure.

Unfortunately, the full-fiber rollout is not expected to generate any sales growth this year. BT's latest outlook is for "broadly flat" revenues, which means 7% less than it made in the fiscal year to March 2020. The investment will, however, gobble up nearly £5 billion ($7.1 billion) in capital expenditure this year and next. A year ago, BT recorded about £2 billion ($2.8 billion) in annual free cash flow. This year, it expects to make £1.3 billion ($1.8 billion) at most.

To relieve some of the burden, it might seek investment partners for the additional 5 million premises in its latest plan. Quizzed by the Telegraph newspaper, Virgin Media O2 boss Lutz Schuler refused to rule out the acquisition of a stake in Openreach, BT's networks business, stoking fears about competition and the emergence of a new telecom monopoly.

BT seems happy enough to go solo to the other 20 million properties because Ofcom, the regulator, has said it will not impose any pricing controls on the full-fiber investment. In essence, this will allow Openreach to set whatever wholesale fee it deems appropriate. In practice, it is unlikely to mean that broadband access becomes much pricier as BT tries to recoup its investment.

That will partly be due to infrastructure-based competition, as Ofcom is aware. While it has given BT the "regulatory holiday" it always craved, Ofcom has simultaneously leaned on the incumbent to provide low-cost access to its ducts and poles  the infrastructure that supports fiber lines  so that other investors can more easily build networks.

In areas where BT lacks infrastructure rivals, it would struggle to justify charging higher rates than it offers consumers elsewhere. A bigger problem, perhaps, is lack of consumer interest in faster broadband networks, especially if service fees are higher. BT has arguably been a victim of its own success at building part-fiber networks that have proven capable enough during the pandemic.

Data seems to bear this out. According to its latest financial statements, only 905,000 of BT's 4.61 million full-fiber lines had been connected by the end of March. And while the number of homes passed had risen by 2 million in a year, connections were up just 381,000. IDATE also reckons the UK has a lower full-fiber adoption rate than other European countries. Just one-quarter of lines were in use in September, it says, compared with rates of 71% in Spain, 60% in Portugal, 48% in France and 30% in Germany. 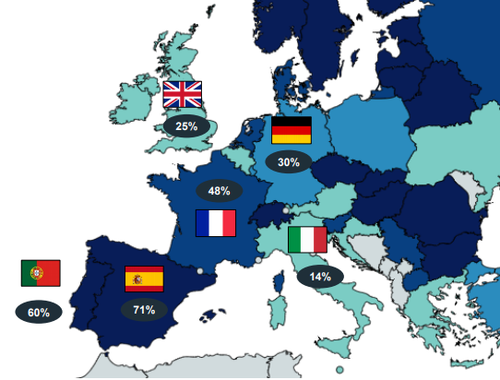 Low take-up is a double whammy for Openreach because it cannot switch off older platforms and reduce costs while customers are still using them. Mobile operators face a similar dilemma with 2G and 3G, older network technologies that cannot be entirely phased out until enough customers have moved on. BT could always nudge them along by offering low-cost, full-fiber deals, but this might further undermine its potential return on investment.

Still, shareholders are at their happiest in months. In September, BT's share price was languishing at 98.38 pence sterling. Today, it hit about GBX182. Investors have probably rationalized that BT would face a very bleak future if it stubbornly refused to upgrade its networks, and they have undoubtedly welcomed management's prioritization of the core telecom business over a questionable move into media under previous leadership.

But the share price is down from GBX484.85 at the start of 2016, showing how far its prospects have fallen. Without an unforeseen turn of events, few would expect it to scale those heights again.