In June 2019, weeks before he became prime minister, Boris Johnson decried the UK's failure to provide a lightning-quick broadband service to all but a small number of homes.

If chosen as leader, Johnson wrote in the Telegraph newspaper, he would turn broadband builder, providing gigabit for everyone by 2025. The "slowly revolving pizza wheel of doom" that frustrates PC users with poor connections would be gone for good.

The National Audit Office (NAO), the UK parliament's own spending watchdog, is unconvinced. 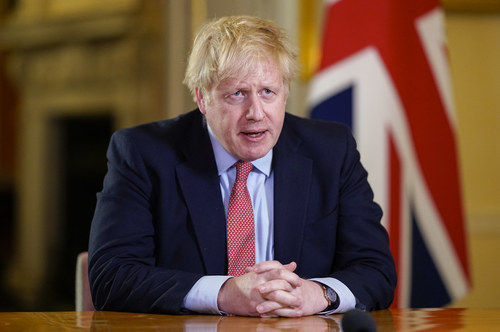 UK Prime Minister Boris Johnson is unlikely to realize his gigabit-for-all ambitions by 2025.

In a detailed report issued today, it estimates that build rates would have to increase fourfold to reach a 2025 target it diplomatically calls "challenging," especially for the hardest-to-reach 20% of premises. Authorities have not even come up with detailed plans for Johnson's gigabit scheme.

That will come as no surprise to the industry, parts of which had privately mocked Johnson's proposal when it first hit the press.

Last year, less than a tenth of homes had access to the full-fiber networks that Johnson favors. Extending these across the country would cost billions and be hard to justify to investors. Existing laws around construction permits remain a further obstacle.

BT is doing its part. In May, after coming under renewed pressure from regulatory authorities and rivals, the telecom incumbent said it would spend about £12 billion ($15.5 billion) to increase full-fiber availability to about 20 million premises by the mid-to-late 2020s. Its share price tumbled 8% on the day of the announcement.

Nevertheless, private-sector firms besides BT are also stumping up money for higher-speed networks.

By the end of next year, Virgin Media, the country's main cable operator, expects to be capable of providing a gigabit service to all the homes in its footprint  currently more than 15 million premises. It is also building in new areas with an ultimate coverage target of 17 million properties in view.

CityFibre, a smaller company with private equity backing, is another broadband builder that has upped targets. Promising to invest as much as £4 billion ($5.2 billion) in construction, it aims to cover about 8 million premises altogether in the coming years.

Gigaclear, Hyperoptic, Community Fibre and Zzoomm are among the UK's alternative fiber investors.

The good news is that high-speed service availability is already improving quickly. According to the NAO report, about 14% of UK premises are now covered by full-fiber infrastructure, while 27% can access gigabit-capable networks.

But this still leaves the country with "one of the lowest full-fiber coverage rates in Europe," says the NAO.

The latest data shows there are about 31 million premises in total across the UK. As things stand, about 95% of premises can receive at least 30 Mbit/s, leaving 5% without what authorities optimistically call a "superfast" service.

Overbuild, where two or more companies develop networks in the same area, means that millions will probably fall outside the scope of gigabit plans already announced by the private sector.

Authorities have earmarked £5 billion ($6.5 billion) in government funding for about 6.2 million properties that are hardest to reach. But the NAO is evidently skeptical that gigabit upgrades for these properties will happen by 2025.

One of the main challenges, it says, will be to "design and deliver a complex procurement in time for industry to deliver to the final 20%."

The NAO's big concern is that UK infrastructure will not be capable of meeting future demand. In the past, it says in its report, coverage has always been prioritized over broadband speeds.

But the UK has arguably been a victim of its earlier broadband success. The unbundling of BT's "local loops" produced effective resellers such as TalkTalk and Sky, removing an incentive to roll out alternative networks.

In southern European markets such as Portugal and Spain, the opposite is true: Slow progress on unbundling compelled firms to invest in their own infrastructure.

Despite the UK's low spot in broadband rankings, networks have coped admirably with the surge in demand that COVID-19 and lockdown life have brought.

While BT has reported increases in daytime demand of between 35% and 60%, there have been no significant problems caused by outages or congestion.

But enthusiasm for video streaming and Zoom-enabled chats with friends and colleagues means Internet traffic is now growing by 40% annually, according to the NAO.

The prospect of demand outstripping capacity in a world that has shifted online is a scary one indeed.