Remote-control surgery is, apparently, the perfect opening for 25Gbit/s fiber technology. And a pair of robot hands performing a lobectomy, operated by a surgeon in a different town, would be an impressive albeit grisly demo. Absent a volunteer with lung cancer, Proximus and Nokia had to make do with a mock speedometer, cranking up the dial as the latest broadband technology was released. As spectacles go, it was not exactly Formula 1 racing.

The broadband speed demo, carried out today in Antwerp, was a new record  the first time 25Gbit/s technology has been let loose in the real world. The speedometer never made it above 20.99, as far as Light Reading could make out, but this is seemingly down to the normal "overhead" that broadband connections experience. And even 21Gbit/s is undeniably quick. Most broadband customers are lucky to receive a gig. 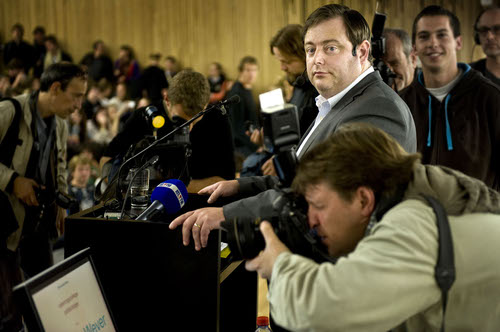 They should not expect the 25Gbit/s technology to arrive anytime soon and would have little use for it anyway. Nor would an individual customer receive 21Gbit/s, even after the overhead. As with other mainstream fiber technologies, that bandwidth would be shared with other users on the same branch of the fiber tree, typically around 32 altogether.

Those considerations aside, this was still a speed record and one that is important to both Proximus, Belgium's former state-owned telecom incumbent, and Nokia, the world's biggest non-Chinese vendor of fiber broadband products, as a showcase of the possibilities and for pure bragging rights.

For Proximus, there is probably less interest in beating other, mainly non-Belgian operators than in showing politicians and regulators it is at the forefront. Unsurprisingly, then, Proximus had dragged along Bart de Wever, the mayor of Antwerp, who was famously caught with his pants down (literally) during an interview in January. A fully clothed Petra De Sutter, Belgium's telecom minister, also made the event.

Proximus wants authorities onside because it is spending about 5 billion ($6.1 billion) to blanket the small European country with fiber. Guillaume Boutin, the Belgian operator's CEO, says he wants to cover 70% of homes and businesses by 2028 "and for that, we need investment, capacity and innovation." It also needs regulators to be supportive of the civil works and tolerant of the disruption.

For Nokia, the demo is more about ripping your shirt off after scoring from a 25-yard free kick. Its loss of market share in 5G after earlier product blunders has made it hyperaware that technology leadership is important. And while its reputation is solid in fixed, it faces challengers such as Adtran and Calix, two growing US providers.

It is also locked in a battle with China's Huawei over the future direction of the market. Nokia wants 25G PON, the technology it showed off in Antwerp, to be the natural successor to XGS-PON, the 10Gbit/s technology that is currently the most advanced the industry has to offer. Preferring 50G PON as the next step, Huawei and some of its Chinese customers effectively blocked the standardization of 25G PON last year.

In response, Nokia has marched 25G PON outside the International Telecommunications Union and set up what is now called the 25GS-PON MSA (for multi-source agreement) Group. The more telco supporters like Proximus that it can show off, the more momentum it can build. It has also developed its own chipset, branded Quillion, pitching this as an economical alternative to suppliers such as Broadcom.

"That chipset supports the current technology, the upcoming XGS-PON technology and now the 25Gbit/s technology is being added," said Geert Heyninck, the general manager of Nokia's broadband access business unit. "Not only does the Quillion chipset bring the right functionality at the right cost point, but it does this at a power level which is half the previous generation of chipsets."

As boring as backhaul

So when and where might 25G PON actually be used? Not in homes, for certain, and probably not for daredevils needing surgery, either. A likely scenario is that Proximus introduces it for backhaul purposes  providing connections between mobile basestations and the core network  when it starts to densify its 5G network (essentially, add more sites), according to Geert Standaert, the operator's chief technology officer. Business customers may also have a need for the higher-speed technology.

The nice thing for Proximus is that once the civil works are done and the fiber is laid, upgrading to XGS-PON and then 25G PON should be fairly straightforward and comparatively inexpensive. Assuming Nokia pockets some cash for providing and activating line cards and other gubbins, it also benefits.

Ideally, the completion of the fiber rollout will bring a drop in capital intensity, boosting profitability and bringing joy to shareholders. But operators may by then have figured out there is something else demanding their investment attention. And as for making additional revenue from high-speed connectivity, fiber and 5G have so far turned out to be the biggest planetary disappointment since the Star Wars reboot of the late nineties.