Frontier Communications was quick to respond to allegations from the Federal Trade Commission and a handful of states that the telco misrepresented advertised DSL speeds and engaged in unfair billing practices, calling the accusations "baseless."

"Frontier believes the lawsuit is without merit," the company said in a statement, adding that it will "present a vigorous defense."

Frontier claims those disregarded facts include that its rural DSL Internet service was "enthusiastically welcomed when it was launched and has retained many satisfied customers over the years." Frontier also argues that its DSL speeds have been "clearly and accurately articulated, defined and described in the Company's marketing materials and disclosures."

The 50-page complaint (PDF), filed May 19 by the FTC along with six states (Arizona, California, Indiana, Michigan, North Carolina and Wisconsin), tells a different story.

"In numerous instances, Frontier has sent consumers advertisements for DSL Internet service at speed tiers that Frontier could not provide to them," alleges the complaint, which claims that "thousands" of consumers have complained to the telco and to government agencies about the DSL speed issue.

The complaint further claims that Frontier, at the point of sale, has access to information indicating that the service provider is unable to provide certain of its DSL speed tiers to consumers based on their residential addresses.

However, in "numerous instances, Frontier or its sales representatives have offered consumers, and those consumers have accepted, subscriptions for DSL Internet service at speed tiers that Frontier could not provide to those consumers," the complaint continues. "In numerous instances, Frontier does not provide consumers with any written documentation regarding their DSL Internet service, either at the point of sale or when Frontier commences service remotely or through its technicians."

The complaint also alleges that Frontier has provisioned customers for slower speeds than the DSL tiers for which they are subscribed, "preventing those consumers from receiving service at speeds corresponding to the tier of service they pay for."

The FTC and the states involved in the complaint also claim that some of the issues are due to factors known to the telco or within Frontier's control. Those include physical factors, such as the distances between Frontier's central networking equipment and consumers' homes, as well as technical factors, such as low-bandwidth, obsolete and/or overloaded DSLAMs and networking equipment, the complaint alleges.

The complaint backs up some of its findings with an analysis by a management consulting firm done in early 2019 and conducted "at Frontier's discretion and with Frontier's participation." That study, based on the telco's proprietary network data and internal records for nearly 1.5 million then-DSL subs, found that about 440,000 of Frontier's DSL customers, or about 30% of the population analyzed, were potentially "oversold" on speed tiers that exceeded the actual speeds the telco provided to them.

Frontier provides DSL service to approximately 1.3 million consumers, many in rural areas, across 25 states, according to the complaint.

Frontier filling up with fiber as it exits bankruptcy

The filing comes at a time of change at Frontier, which exited Chapter 11 bankruptcy on April 30. While a lack of network upgrade activity was a major contributor to Frontier's troubles, the telco is looking to rectify that and put itself on a trajectory of growth with an ambitious fiber-to-the-premises (FTTP) upgrade plan. 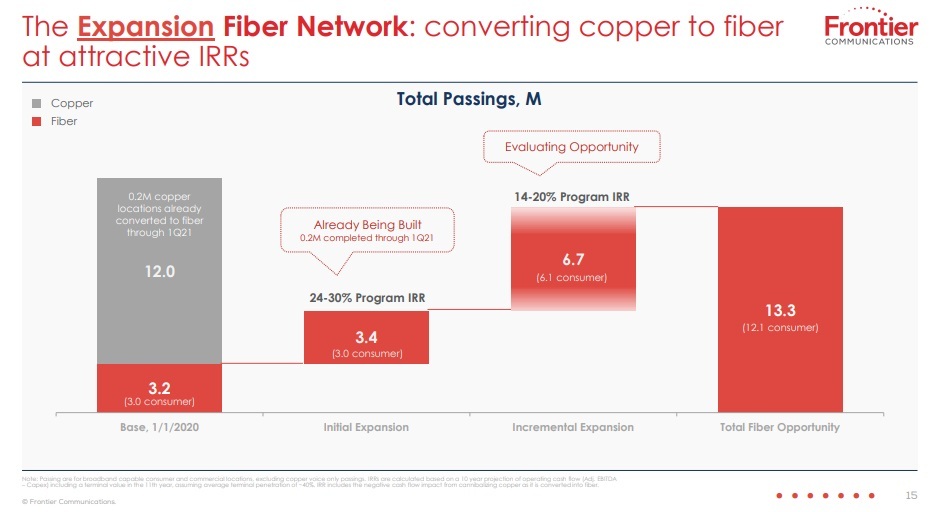 Frontier's base fiber network currently passes about 3.2 million homes and businesses, with 1.3 million customers now getting service on those FTTP networks.

Frontier's initial fiber upgrade plan covers about 3.4 million homes and businesses passed, with another 6.7 million passings currently under evaluation for future fiber upgrades. Tied into that plan, Frontier expects to extend its fiber network to 495,000 locations this year, and effectively double that deployment rate in 2022.