Amid the din of a whistleblower testifying about Facebook's problematic policies and a recent widespread outage, the social media giant's Connectivity unit this week provided a detail-filled update on its grand connectivity strategy.

Facebook Connectivity estimates that more than 300 million people now have access to faster Internet in some shape or form thanks to the work of Facebook Connectivity going back to 2013, and believes its various plans and initiatives discussed this week put it in position "to connect the next billion."

"High speed, reliable Internet access that connects us to people around the world is something that's lacking for billions of people around the world," Mike Schroepfer, Facebook's chief technology officer, declared during the company's "Inside the Lab" roundtable discussion. "Business as usual will not solve it. We need radical breakthroughs to provide radical improvements  10x faster speeds, 10x lower costs."

A handful of Facebook execs and engineers detailed some of the work that's underway, focusing on a subsea cable initiative that provides backbone capacity for regions such as Africa, a new way to deploy fiber networks less expensively, and the use of millimeter wave spectrum to deliver gigabit-class speeds to residences and businesses.

On the data backbone side of the connectivity ledger, Facebook and its partners are in the process of building 150,000 kilometers of subsea cables, and working on new sea-based power stations that keep those cables juiced.

"This will have a major impact on underserved regions of the world, notably in Africa, where our work is set to triple the amount of Internet bandwidth reaching the continent," Dan Rabinovitsj, Facebook's VP of connectivity, explained. That activity partly ties into a new segment of subsea cables called 2Africa PEARLS that will connect three continents: Africa, Europe and Asia. 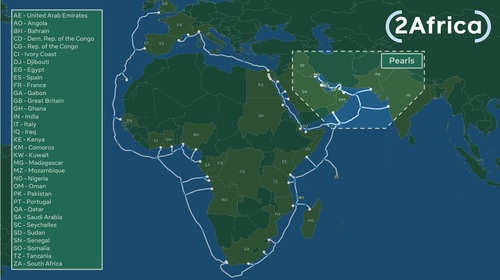 Facebook says 2Africa Pearls, a new segment of subsea cable that connects Africa, Europe and Asia, will bring the total length of the 2Africa cable system to more than 45,000 kilometers, making it the longest subsea cable system ever deployed, the company said.
(Source: Facebook)

But "capacity alone isn't enough," she said, noting that Facebook is also working on ways to configure and adapt the amount of capacity provided to each landing point. Facebook is also utilizing a model called "Atlantis" to help forecast and optimize where subsea cable routes need to be built. An integrated adaptive bandwidth system will likewise allow Facebook to shift capacities based on traffic patterns and reduce congestion and improve reliably, Perret explained. 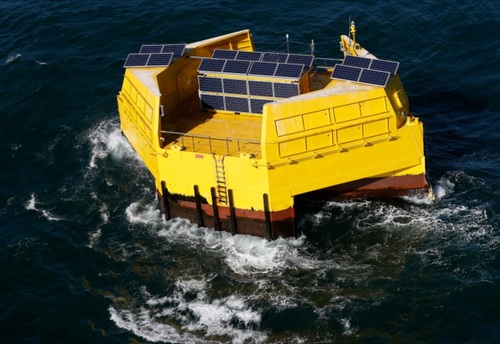 Tapping into a mix of solar panels and wave energy converters, the aim is to continually generate up to 25 kilowatts of power to the subsea cables. That solution, the company believes, will help bump capacities from .5 petabits per second to 5 Pbit/s. Facebook expects to start trials of these floating power stations "shortly," Perret said.

Facebook has also been active on land, announcing that it has made major progress with Bombyx, a robot that deploys fiber strands along widely deployed medium-voltage power lines.

The general idea behind Bombyx, a project introduced last year, is to vastly reduce the costs and time required to deploy fiber. Facebook estimates that each robot will eventually be able to install more than a kilometer of fiber  and avoid obstacles along the way  in roughly 90 minutes. 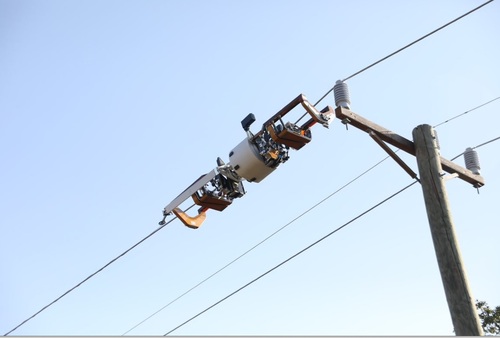 Facebook says it has drastically reduced the time it takes for a Bombyx robot to navigate obstacles.
(Source: Facebook)

Karthik Yogeeswaran, wireless systems engineer at Facebook, noted that Bombyx is inspired from the helical fiber-optical wrapping techniques pioneered in the 1980s, but represents a massive leap. Bombyx, for example, does not require a heavy counterweight nor constant human intervention, or the need to shut off power during deployment  elements that made those early efforts fall well short of widespread use. Rather than using a counterweight, Facebook has developed a spool-free cable coil shaped like an airplane neck pillow with an opening that allows Bombyx to pass over obstacles.

Facebook has also outfitted the robot with the kind of thruster fans used in drones to keep the robot balanced and prevent the cable from swaying. The robot also has access to a 3D map generated from an onboard camera and customized sensors that detect and analyze the boundaries of obstacles.

According to Yogeeswaran, those innovations have cut the time it takes for Bombyx to cross an obstacle from 17 minutes to four minutes. He said work is underway to make the operation of the Bombyx robot fully autonomous as it navigates obstacles.

And Facebook's work in this area extends beyond the Bombyx robot itself. The company also helped design a smaller, flexible and heat-resistant cable tailored for deployments along the power lines. That design has helped Facebook reduce the strand count in those cables from 96 fibers to just 24 fibers. That development combo makes the fiber cable about ten-times lighter and smaller than normal aerial fiber cable, Yogeeswaran said.

Facebook has yet to announce any significant deployment activity for Bombyx, but that day is getting closer. "While the pandemic has slowed development, we're wrapping our prototype phase now and starting pilot discussions with a handful of electric utilities," Yogeeswaran, said.

"This is a practical way to leverage existing infrastructure to bring fast Internet to a lot more people," Rabinovitsj, a former top exec at Ruckus Wireless who joined Facebook in 2018, said.

Facebook continued to cast Terragraph as way to bridge the connectivity gap at a fraction of the costs required to trench fiber. "You can think of it as extending fiber in the air," Yael Maguire, VP of engineering at Facebook, explained.

Facebook, which kicked off the vision for Terragraph in 2015 and counts Qualcomm among its tech partners, expanded a bit on the system's architecture. It relies on a network of distribution nodes that tie back to fiber-based point-of-presence (POP) sites. Meanwhile, consumer nodes, mounted on the sides of buildings or on rooftops, connect to the premises and end user via Ethernet cables or Wi-Fi routers.

Given the limited range of 60GHz spectrum, nodes have to be placed at 200- to 250-meter intervals. Maguire talked up the distributed nature of Terragraph's architecture and the use of a "resilient mesh" that takes advantage of a signal rerouting function built into each node.

"The network figures itself out, once deployed," he explained.

Facebook released some updated stats on Terragraph, a technology that is licensed for free to a handful of manufacturing partners. The company noted that more than 30,000 Terragraph units have been deployed so far with north of 100 service providers and system integrators worldwide.

Alaska Communications is among those using Terragraph with fixed wireless access gear made by Cambium Networks. Alaska's snow and ice and a short five-to-six month fiber-build season made Terragraph particularly attractive for some last-mile deployments, according to Rick Benken, Alaska Communications' VP of network strategy and engineering and operations.

Alaska Communications is early in the deployment process, having brought Terragraph-based services to a few neighborhoods in Anchorage. Benken said the company plans to expand the deployment to parts of Fairbanks, Juneau and the Kenai Peninsula in the coming years.

Facebook Connectivity estimates that Terragraph has brought broadband to more than 6,500 homes in Anchorage. Among other examples, Terragraph is being used to bring more connectivity to Perth, the isolated city of Western Australia, via a partnership with Pentanet and Cambium.

The irony of Facebook's connectivity announcements in the wake of a massive outage suffered on Monday (October 4) was not lost on the company. Schroepfer acknowledged it in his opening comments, noting that he was "very sorry to everyone who was impacted" by the outage.

"Everything is back up and running, but when you're providing an essential communications platform for billions of people, I never want to see downtime like that. We pride ourselves on running reliable infrastructure for the whole world, so [Monday] was pretty humbling," Schroepfer said. "It is a good reminder of the work we are doing today, how the thing we all take for granted  high-speed, reliable Internet access that connects us to people around the world  is something that's lacking for billions of people around the world."