Corning is heading into "transformational times."

At least, that's what Mike Bell, who leads Corning's optical communications business, said during a 17-minute corporate video that Corning produced in December.

The video clearly and succinctly outlines what Bell believes is a "large, multi-year wave" of double-digit growth in the fiber industry in general. And that's critical for Corning because fiber is the company's biggest business unit.

A number of huge shifts in the telecommunications market are putting Corning in a bull's eye. First, the Infrastructure Investment and Jobs Act (IIJA) passed last year allocates fully $42 billion for the construction of broadband networks around the country. A significant portion of that spending  Corning expects north of 10%  is expected to target fiber networks specifically. And beyond that government funding, a wide range of public and private companies have begun substantial investments of their own into new fiber buildouts.

One analyst firm described the fiber situation as "historic."

"In the US, it took two decades for the first 40 million fiber home passings, while it may only take the next five years for the next 40 million homes," wrote the financial analysts at Cowen in a recent note to investors. "Passings" are locations with fiber. They argued that investor interest in fiber has reached a "fever pitch."

But for Corning, there's one more key element at play: The IIJA passed last year includes a "Build America, Buy America" provision. Under the terms of the provision, 55% of the cost of the components in a telecom product must come from US-based sources.

"Corning is the only meaningful domestic fiber OEM," noted the Cowen analysts. 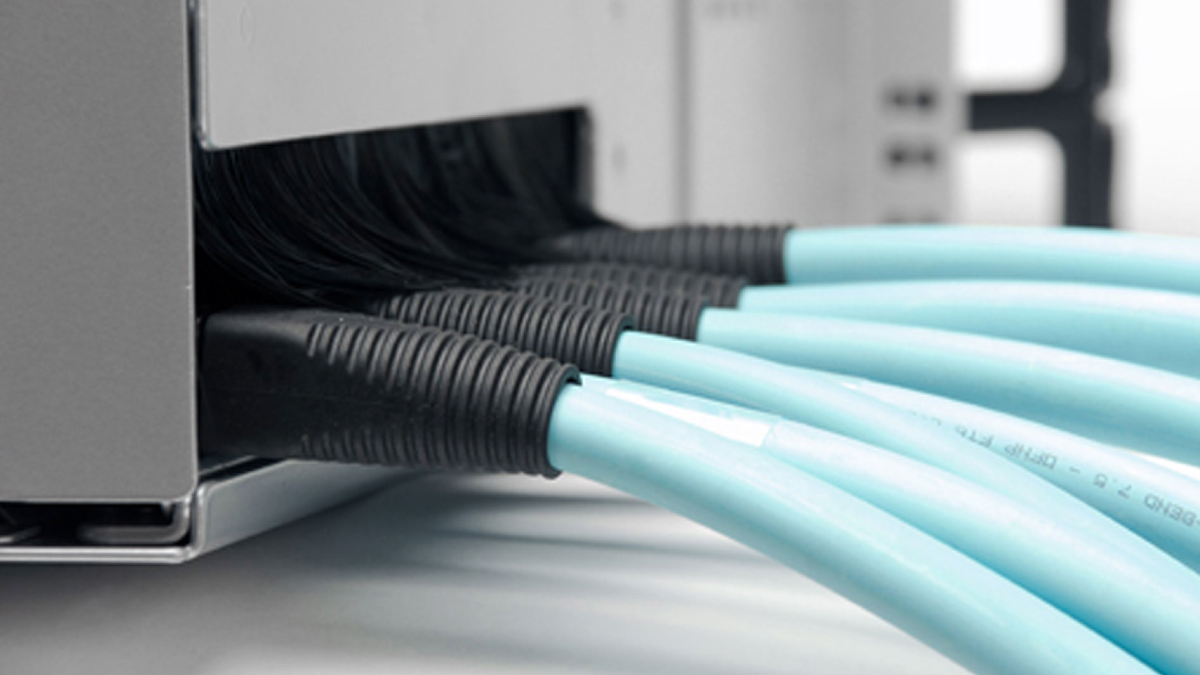 Corning executives are well aware of the situation.

"As the US infrastructure plan rolls out, it could add as much as a billion dollars a year to the market, and we're especially well positioned to capture that growth because of our leadership and because of the plan's 'Buy American' provision," Bell said. "And for Corning, this is going to be big. And it's going to be big for many years."

During Corning's just-finished fiscal year, sales in the company's optical communications business grew 22% year-over-year to $4.3 billion. And company executives expect volumes and margins to expand in the coming months and years.

Part of Corning's strategy involves making better fiber products, according to Bell. He explained that the company pioneered fiber technology that removes the need for in-the-field cable splicing. More recently, he said the company developed new products that are much smaller and can therefore fit into smaller spaces, as well as terminals suitable for rural areas.

However, the fact that Corning is by far the only big US supplier of fiber is causing some concern.

A question of supply

"On the equipment side, the 'Buy America' initiative is also causing problems," the Cowen analysts wrote, specifically pointing to the difficulties smaller operators may face in obtaining equipment. "All agree that the larger players undoubtedly have an advantage on resources, as scale allows a carrier to move teams around."

Indeed, one analyst on Corning's most recent quarterly conference call in January said he's hearing that some customers must wait up to two years to receive Corning's high-count fiber cables.

Wendell Weeks, Corning's CEO, acknowledged as much. "If we could make more, we could sell more," he said, according to a Seeking Alpha transcript of the event. "And that's why we announced the capacity expansions that we did last year. And we expect those to ramp as the year goes on. With each of those capacity expansions, we need to have in place long-term commitments from our customers. And we have those and that is ramping. So, the real bottleneck isn't resin, isn't raw materials, isn't labor. It is just us being able to get into place capacity that is more appropriately balanced to the demand that we are experiencing."

Nonetheless, it's those concerns that pushed some of the telecom industry's biggest trade associations to seek a waiver for the "Buy America" provisions. "While a few individual network elements might meet the 55% domestic content threshold they are extremely limited in number, and it appears that no combination of network products would meet the IIJA's content requirements from end-to-end," wrote trade groups including the CTIA, CCA, USTelecom and NCTA in a recent letter to the NTIA, the government agency administering the IIJA.

And the NTIA appears to be listening to those concerns. According to a recent Politico article, the newly appointed head of the NTIA, Alan Davidson, said he's open to issuing waivers on the "Buy America" provisions. However: "There has to be a high bar, and we have to be very smart and very tailored about any waivers that we give," he told the publication.

But Corning continues to argue it will be able to meet demand. "Corning is uniquely positioned to rise to this historic challenge: The requirements for these networks favor fiber  and Corning is the largest fiber producer with the lowest-cost manufacturing platform. As customers partner with us to advance their growth, we invest in capacity to support their needs," the company wrote in response to questions on the topic from Light Reading.

But Corning executives tacitly acknowledged that fiber prices will likely rise no matter what, given the current rate of economic inflation in the US.

"Our gross margin is simply not where it should be," said Weeks in January during the company's fourth quarter conference call. "As we said last quarter, throughout the pandemic, we have prioritized protecting our people and delivering for our customers in a complex inflationary environment and it has come at a cost. Over the last several months, we have negotiated with customers to increase prices in our long-term contracts to more appropriately share the increased cost we are experiencing. We are focused on expanding our gross margin and expect improvement in 2022 as our sales growth and our price actions take hold throughout the year."