Ciena boss Gary Smith can be thankful that hardly any of his company's optical networking products were sold to Russia before it invaded Ukraine last month. The little business it did there has now been halted altogether. "We are complying with sanctions and have stopped shipments on the escalation of the conflict," Smith told analysts earlier today. "We have made the decision to immediately suspend business operations in Russia."

The company joins a growing list of telecom and technology firms that have paused Russian operations  moves that will probably force Russian firms to rely even more heavily than they do on Chinese vendors. For Ciena, there is unlikely to be any material impact, said Smith. Its exposure to the region remains extremely limited. 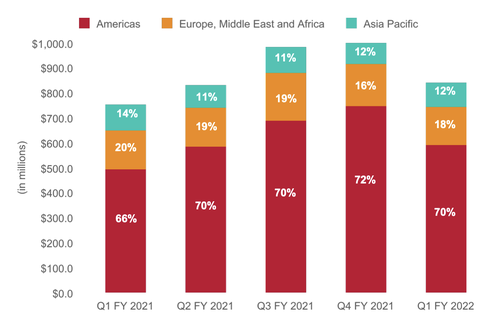 The sharp drop in Ciena's share price today  down almost 9% in New York at the time of writing  happened for other reasons. Ciena, essentially, is struggling to keep pace with orders. A $3 billion backlog has built up while components remain in desperately short supply. Sales are rising. Margins are being squeezed on higher supply-chain costs.

In some ways, runaway demand sounds like a nice problem to have. Revenues at the company were up nearly 12% year-on-year for the recent first quarter, to $844.4 million. And Ciena continues to guide for sales growth of between 11% and 13% this year. "We are seeing extraordinary demand generating significant momentum in the business," said Smith.

"We are talking with customers today about costs going up quite a bit, particularly with respect to semiconductors and integrated circuits," said Jim Moylan, Ciena's chief financial officer. He evidently hopes to pass on some of that increase in the form of higher fees but insisted any price increases in the sector are a "rarity."

Ciena looks to have been as well prepared as anyone for today's supply-chain problems, though. It started to place component orders about nine months ago to meet expectations for a "strong second half" this year, according to Smith, and has been accumulating less scarce inventory so that it can rush out finished goods when the supply constraints ease.

Nobody could seriously complain about Ciena's competitive situation, either. It has a highly respected product portfolio and is rated highly on its market position by several independent analyst firms, including Light Reading sister company Omdia. The backlash against China's Huawei is translating into business opportunities in Europe and India. Surging volumes of Internet traffic are forcing operators and data-center owners to invest in fatter and faster pipes.

Still, much is riding on Ciena's forecast that supply-chain conditions will improve in the second half. Dave Kang of B Riley Securities probably spoke for numerous analysts when he said the implication of Ciena's full-year financial guidance is that 2022 will be "significantly backend-loaded." He has been predicting a gross margin for the current (second) quarter of 45%, against Ciena's range of 42% to 44%. That partly explains the market reaction.