According to a fact sheet released today by the White House, the broadband piece of the proposed order, set to be signed by Biden Friday afternoon, aims to tackle issues that are limiting competition, raising prices and reducing choice for high-speed Internet services.

Among the specific issues being targeted is the elimination of exclusivity deals or "collusive arrangements" between landlords and ISPs that can limit service options and more heavily expose low-income neighborhoods.

The proposal also targets what is viewed as a lack of price transparency, which makes comparison shopping difficult for consumers. On that point, the Order points to FCC data showing that actual prices paid for broadband can be 40% higher than advertised. To help remedy that, Biden's plan is to revive a Broadband Nutrition Label, initially pursued during the Obama-Biden administration, that requires ISPs to report prices and subscription rates to the FCC in a way that can help consumers compare options. 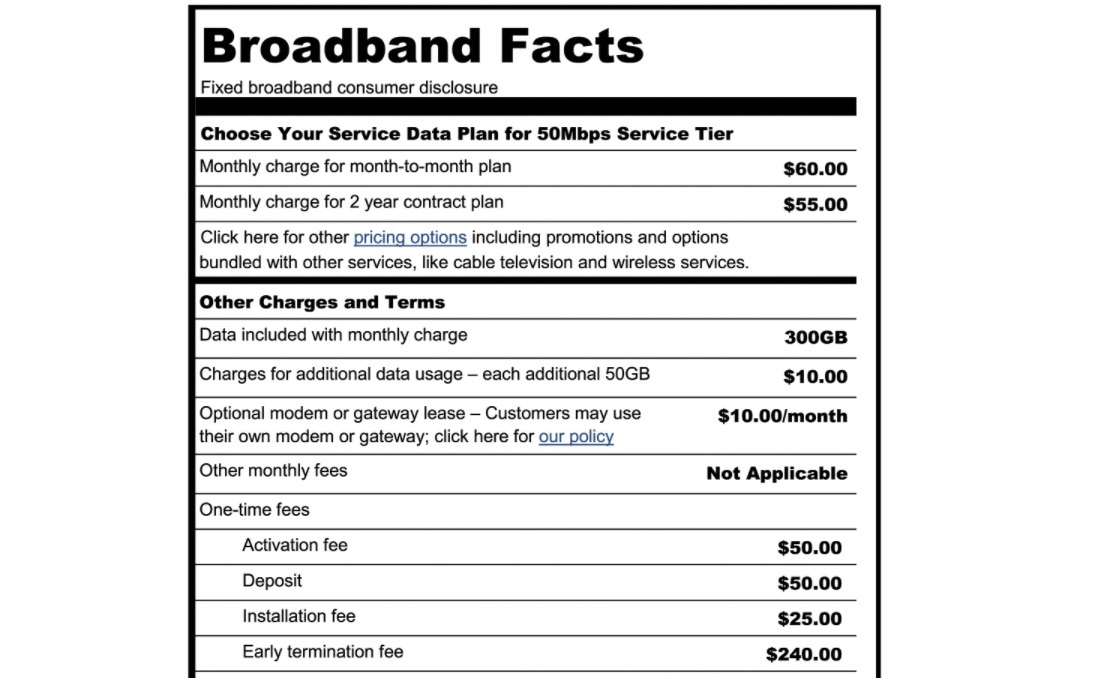 A mock-up of a Broadband Nutrition Label that the Biden administration has in mind.
Click here for a larger version of this image.

The Order also encourages the FCC to limit "excessive" early termination fees and to restore net neutrality rules that were rolled back during the Trump administration.

With respect to restoring of net neutrality rules, Biden will need to name a third Democratic FCC Commissioner to break the current 2-2 tie among sitting Republican and Democratic FCC commissioners, Multichannel News points out.

In response, the NCTA – The Internet & Television Association issued a statement that it is "disappointed" that the order "rehashes misleading claims about the broadband marketplace, including the tired and disproven assertion that ISPs would block or throttle consumers from accessing the Internet content of their choice  As policymakers and industry share the goal of connecting every American to robust and reliable broadband service, we hope the Administration will put the rhetoric aside and focus on constructive solutions."

Free Press had a different take, as the organization is in favor of Biden's plan to restore the rules and reclassify broadband as a Title II service and to take on the other broadband-related proposals. But it also pressed upon Biden to break the deadlock at the FCC, as "the processes and personnel to actually move ahead on these priorities are not in place," Free Press VP and General Counsel Matt Wood said in a statement.

Biden's new executive order comes in the wake of an earlier proposed infrastructure bill that initially included an outlay of $100 billion to bring affordable, reliable to broadband to all areas, with an emphasis on rural parts of the US. That was followed by a less financially ambitious deal that earmarks about $65 billion toward broadband-facing initiatives.

Cracking down on Big Tech

Biden's proposal also looks to rein in Big Tech firms that include the likes of Google, Amazon and Facebook that, he believes, are "undermining competition and reducing innovation" partly through "killer acquisitions" that shut down competitive threats.

Holding that federal agencies have too often failed to block or set meaningful conditions on such deals, the proposal calls for greater scrutiny of mergers, particularly by "dominant Internet platforms" and those focused on nascent competitors. It also takes aim at the accumulation and use of personal data, the impact on competition from "free" products and the overall effect on user privacy.

To that end, the order will attempt to encourage the Federal Trade Commission to establish rules on surveillance and the gathering of data, establish rules barring "unfair methods of competition" on Internet marketplaces.

Other areas of focus of the competition proposal include labor markets, healthcare, transportation and agriculture.