Recent trials led by Sony indicate that ATSC 3.0, the next-gen broadcast TV signaling standard, has potential use as a connected car technology.

If proven out further as a potential alternative to 4G/5G, a new "automotive mode" for ATSC 3.0 could expand on an already growing blend of use cases for an IP-based broadcasting standard that can deliver 4K/HDR video, immersive audio, interactive advertising and even multichannel pay-TV services to TVs and, eventually, to mobile devices. 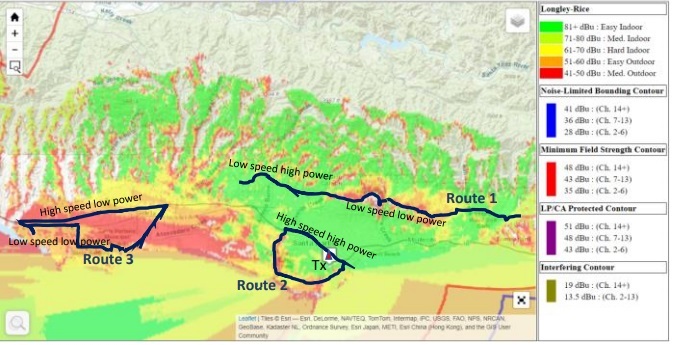 (Source: Sony white paper)
Click here for a larger version of this image.

According to a white paper detailing automotive field tests conducted in Phoenix, Arizona, and Santa Barbara, California, the IP capability of ATSC 3.0 has the potential to support data delivery for a range of automotive applications.

Delivering passenger "infotainment" services is one possible benefit, but a more substantial opportunity exists for local TV stations to transmit software updates and other information to fleets of future cars and trucks, the study surmised.

The field tests were conducted on multiple car routes in rural California canyons and Arizona mountains at varying speeds and at low- and high-power signal strengths. The tests, which focused on areas prone to bad reception, utilized a new demodulator chip from Sony Semiconductor code-named "CLOVER" and ATSC 3.0 receiver prototype software written by Sony Home Entertainment and Solutions of America running on a range of antenna applications. Sony conducted the trial with help from the Pearl TV broadcaster consortium in Phoenix and from News-Press and Gazette of Santa Barbara.

Among initial key findings, the tests showed that ATSC 3.0 could accommodate all channel conditions of strong and weak signal strength.

Word of the tests arrives as broadcasters look to ramp up the deployment of ATSC 3.0, a standard that carries the "NextGen TV" consumer brand.

Twenty TVs with built-in ATSC 3.0 tech debuted last year (including a few models made by Sony), and 2021 is expected to usher in the first ATSC 3.0-capable receivers for TVs that support the current, broadly used, HD-capable signaling standard, ATSC 1.0. Last year, One Media 3.0, a subsidiary of Sinclair Broadcasting, received its first handful of Android smartphones with embedded ATSC 3.0 antennas made by Borqs, an India-based original equipment manufacturer.

While ATSC 3.0 is focused on over-the-air transmission, cable operators are also figuring out how they might support the new standard. Comcast, which owns NBCUniversal, is testing the delivery of ATSC 3.0 signals via its hybrid fiber/coax (HFC) network, starting with the passing through of video in the 4K and HDR formats.