It is true that 5G is about much more than greater capacity. But the demands of greater capacity in 5G – along with other capabilities – should not be underestimated. As end devices consume greater bandwidth, the implications reverberate through the transport network supporting those devices.

In November 2021, Heavy Reading conducted the third iteration of the Operator Strategies for 5G Transport Market Leadership Survey with project partners Ericsson, Fujitsu, Infinera and Nokia. The 2021 survey attracted 81 qualified network operator responses from around the world who shared their views on transport deployment issues and timelines, fronthaul networks and RAN centralization, routing and synchronization and 5G edge connectivity.

This blog is the first in a four-part series highlighting the key findings from the 2021 study. It focuses on fiber and capacity trends.

One of the bigger surprises to come from the survey is the high interest in bidirectional optics – or single fiber working (SFW) – in CSPs' fiber-to-the-tower strategies. Bidirectional optics include transmit and receive wavelengths within the same fiber, allowing single fiber connectivity to cell sites, versus historical dual fiber connectivity consisting of transmit and receive fibers. 52% of CSPs surveyed see SFW as "important," which Heavy Reading defined as up to 50% of towers connected with SFW. 20% of the survey group believes the technology is "critical," meaning greater than 50% of towers will be connected with single fibers. The "important" and "critical" responses combine for 72% of the survey group. On the other hand, just 1% view SFW as "not important."

These results point to the overwhelming need to conserve fiber capacity, even in access networks that may be considered "fiber rich." The reality is that midband 5G traffic will consume large amounts of bandwidth, which can add up to 200300 Gbit/s of fronthaul capacity when combined with legacy 4G traffic.

How important is single fiber working (SFW) with bidirectional optics to your organization's fiber-to-the-tower strategies? 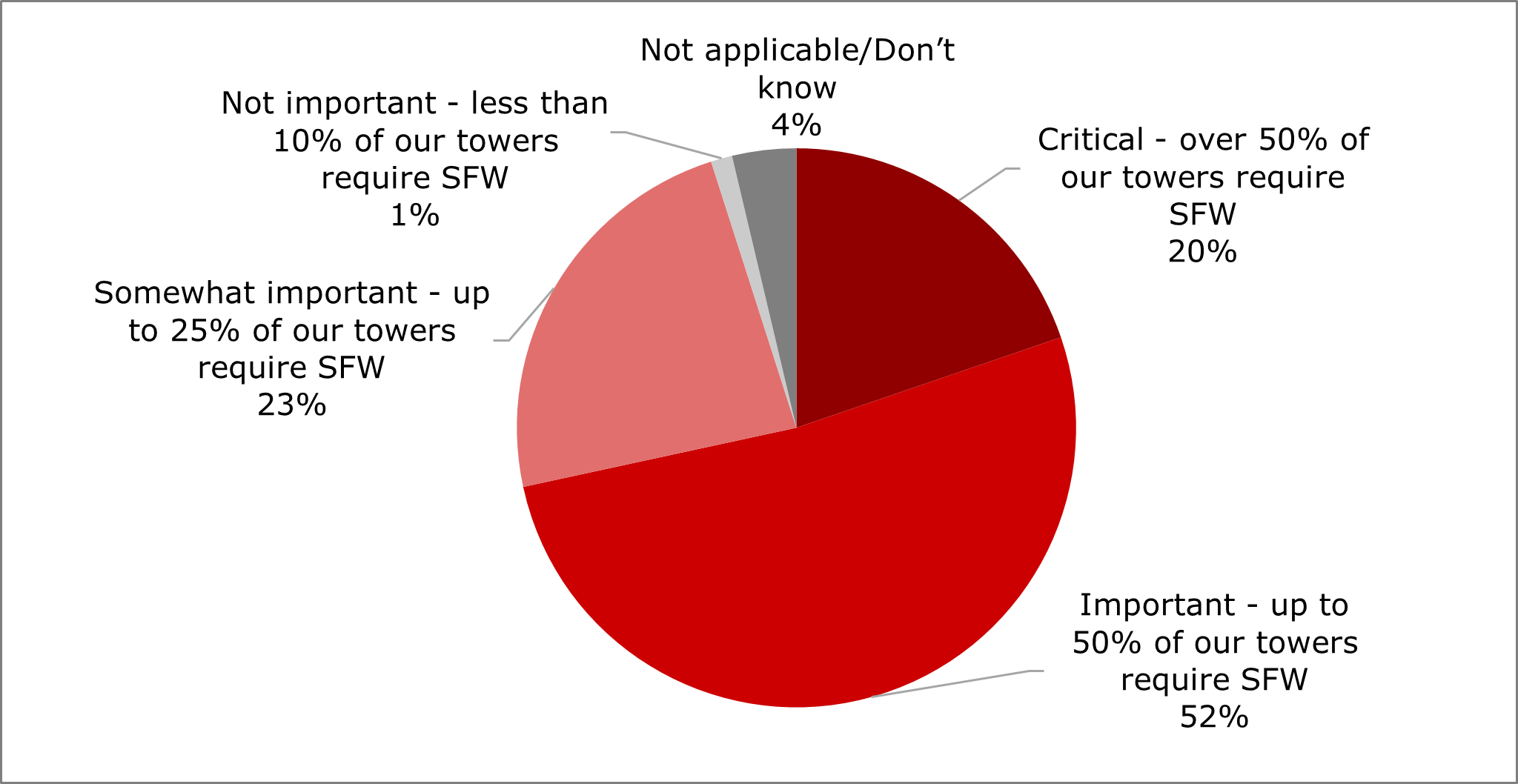 Other Heavy Reading survey data also point to the need for greater capacities in the access network as CSPs build out their 5G xHaul networks over the next four years.

The figures below track the migration of dense WDM (DWDM) access rates used in 5G xHaul between 2022 and 2025, respectively. The goal was to gain insights into how those 5G xHaul data rates are expected to rise and fall over that timeframe.

Looking at the near term, shares of any given data rate are relatively small in 2022, as reflected in the single-digit responses for high penetration rates – such as the 4160% range and the more than 60% range. This is not surprising, as commercial 5G is recent and the majority of the data rates have been used in other applications (broadband, enterprise or even 4G backhaul) for many years.

The one exception here is 25G, which is a relatively new rate for Ethernet and for CPRI but already has a strong early foothold, particularly in 5G fronthaul. Nearly 60% of CSPs report that xHaul accounts for 1140% of 25G DWDM interfaces currently.

Approximately what percent of each of the following DWDM access rates do you anticipate deploying to support 5G xHaul by year-end 2022? 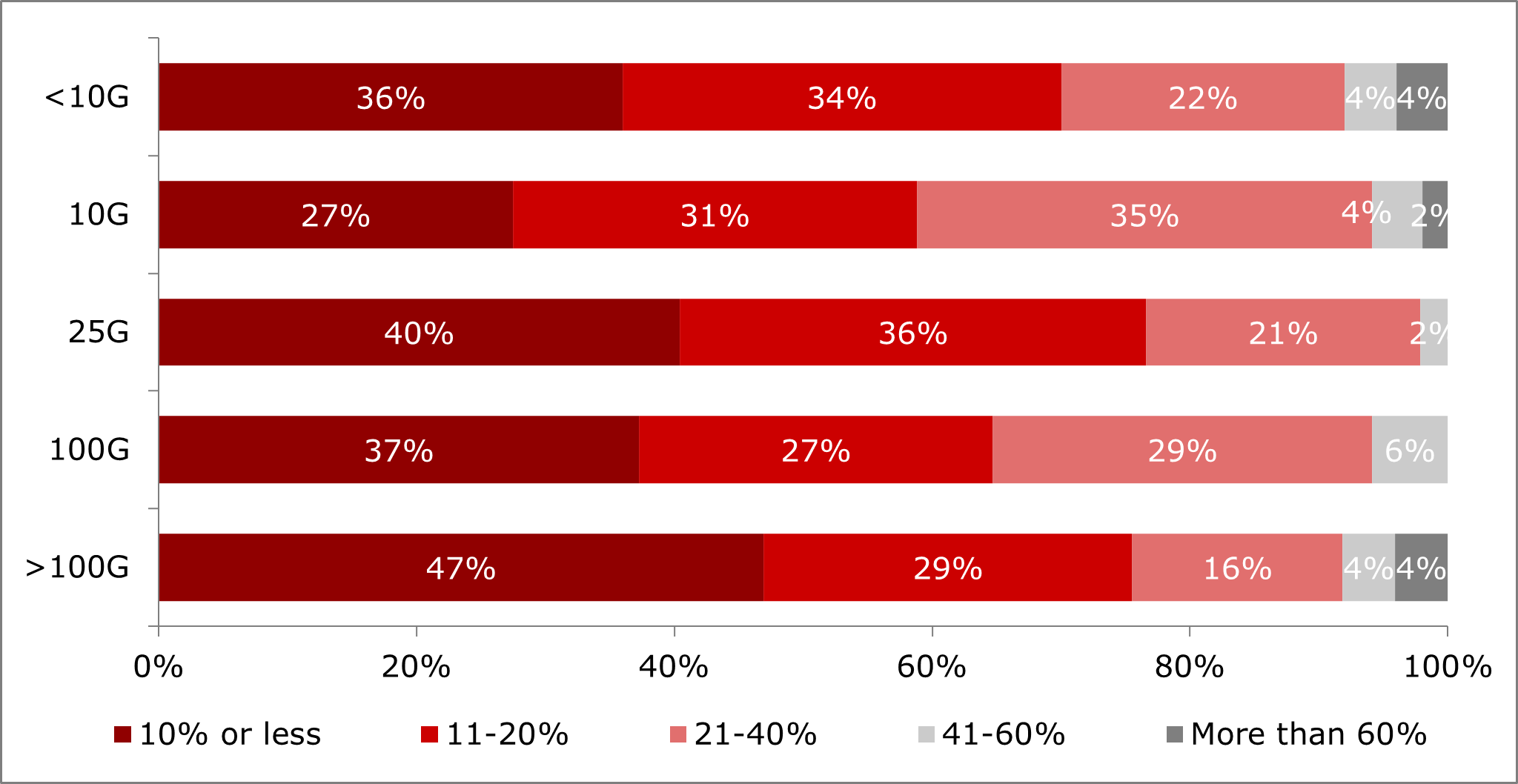 Looking at the longer term, the key observations are in how xHaul increases as a share of nearly each of them – with the exception of <10G, where it mainly decreases. The increases are particularly strong in the following DWDM data rates:

Approximately what percent of each of the following DWDM access rates do you anticipate deploying to support 5G xHaul by 2025? 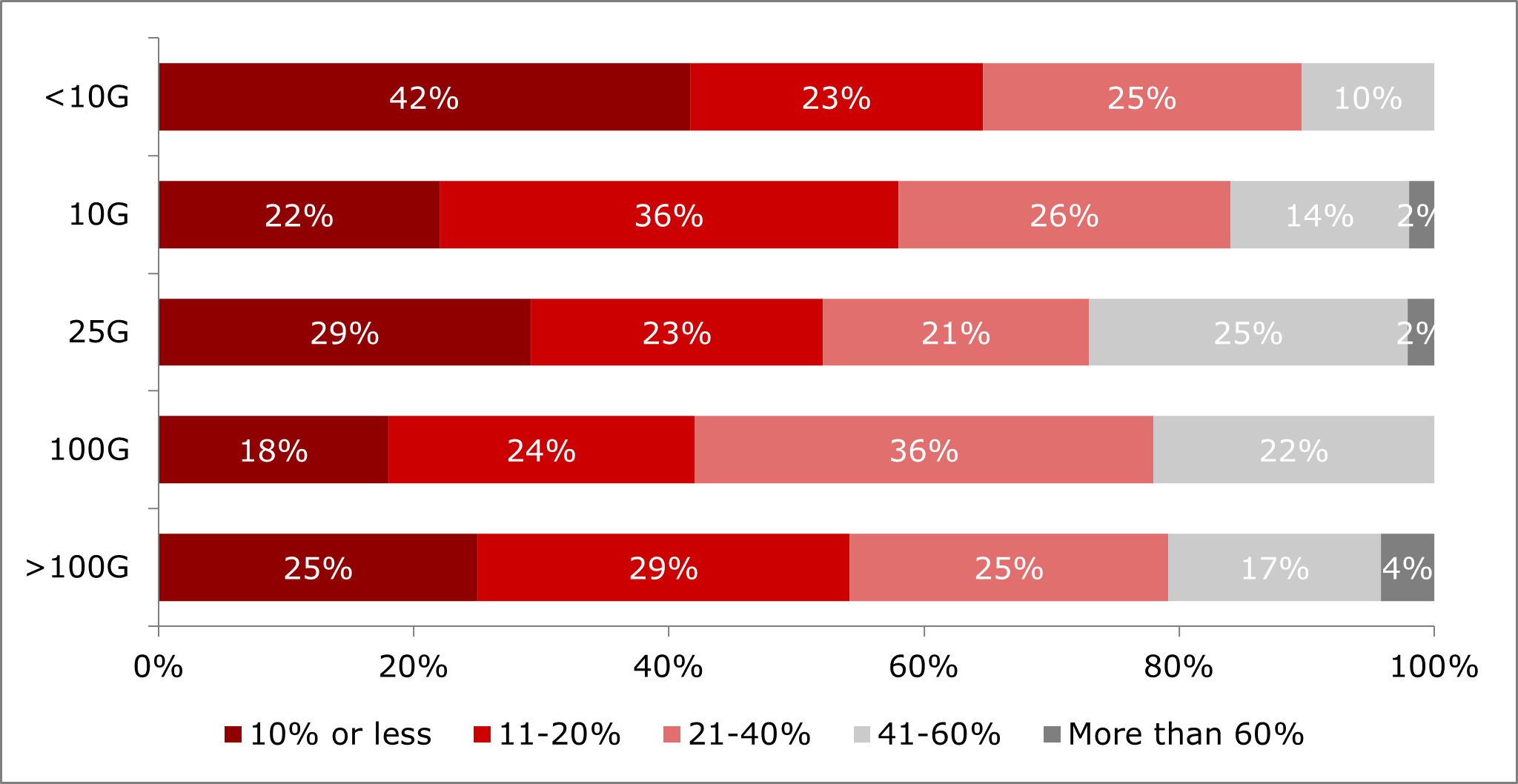 Looking at all three survey results, Heavy Reading sees a clear trend toward significantly greater access network capacities over the next four years as CSPs add and scale their 5G deployments. Service providers will seek to use their fiber resources as efficiently as possible through bidirectional optics, dispelling any notion of an access fiber glut. At the same time, they will increase data rates in the fronthaul, midhaul and backhaul segments to meet expected 5G bandwidth requirements. CSPs see a role not only for 10G and 25G, but also for 100G and beyond over both single fiber and dual fiber infrastructure.

This blog is sponsored by Infinera.

In the second installment of this four-part sponsored series, we look at some more key highlights from a new Heavy Reading study about the broadband industry's plans for closing the Digital Divide.