Viasat has launched a handful of "New Choice" residential satellite broadband plans, including a new high-end tier that tops out at 150 Mbit/s in the downstream.

The new 150-Meg service is a 50% improvement on Viasat's prior high-end tier that delivered up to 100 Mbit/s in the downstream.

Viasat said the New Choice plans offer a range of speeds starting at 25 Mbit/s, on up to the new high-level mark of 150 Mbit/s, with pricing starting at $49.99 per month.

Light Reading has asked Viasat for more detail on pricing and packaging across the new plans, what level of upstream speeds are being provided, and for an update on data usage policies for its range of home broadband speed tiers. Light Reading will update this article once those details are provided.

Update: Viasat declined to provide a pricing guide on its New Choice plans, holding that it prefers that customers visit the service web site to see what plans are available in their area. Light Reading checked several addresses in multiple markets where the new tier is supposedly available, and the new 150-Meg has yet to be surfaced as an option. However, the company did confirm that its New Choice plans are paired with upload speeds of 3 Mbit/s.

Viasat has introduced the new plans to new and existing customers in dozens of US markets, with plans to make them available nationwide at a later date.

Steven Mesnick, GM of US broadband at Viasat, noted in a company announcement that the new speeds are becoming available through an optimization of the company's satellite network, which includes ViaSat-2, a high-capacity geosynchronous satellite that was launched into orbit in June 2017.

The company told Light Reading via email that its vertically integrated infrastructure enables it to optimize its network to best meet customer needs, including balancing download and upload demand.

The company has been hinting that faster speeds were on the way. Speaking on the company's fiscal fourth quarter 2022 earnings call last month, company President and CEO Rick Baldridge noted that Viasat was set to test some faster speed options. "Right now, we top out at 100 megabits per second. We'll probably go to meaningfully higher speed plans," he said. 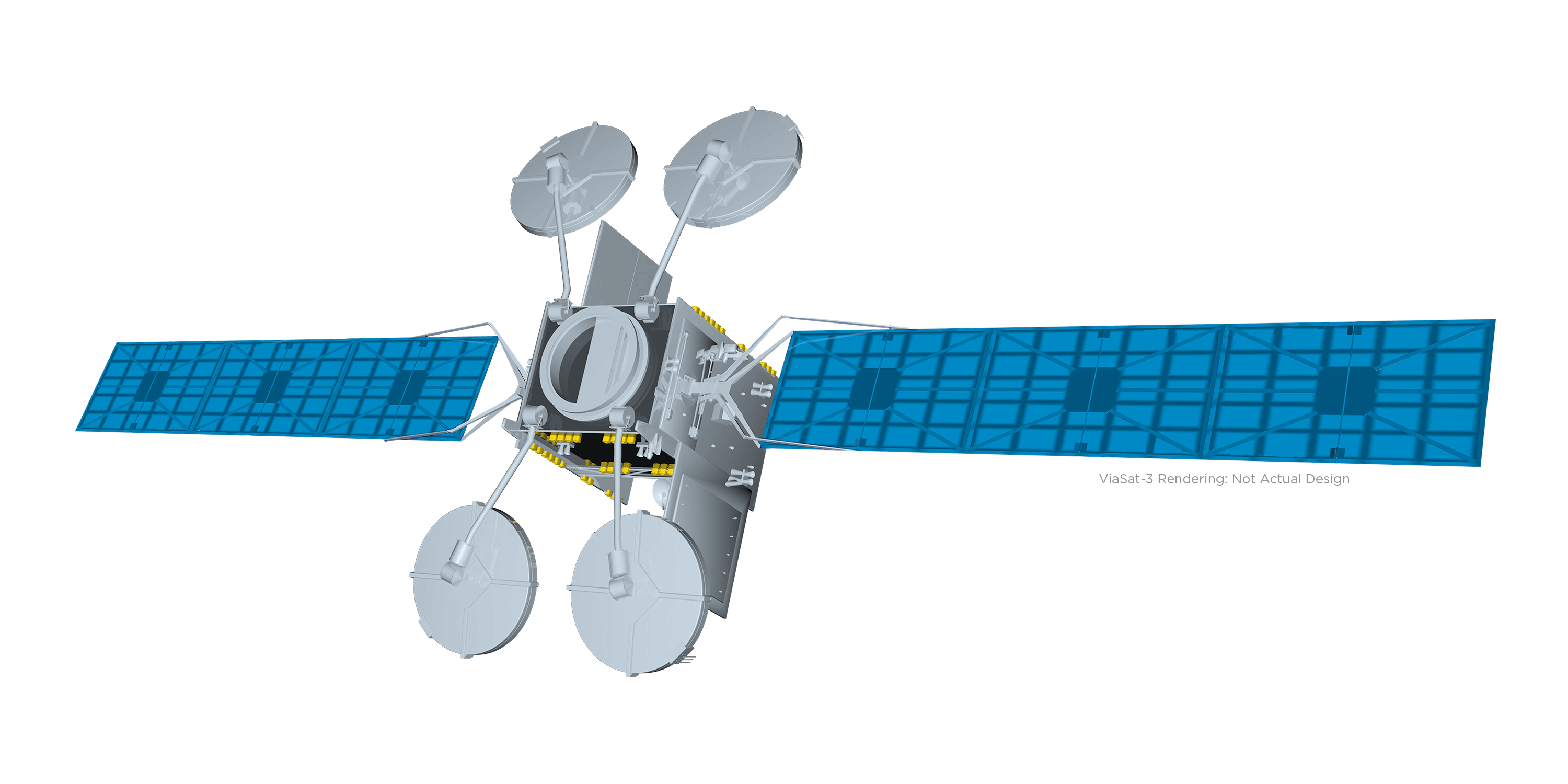 Artist's rendering of the ViaSat-3 satellite. Viasat intends to deploy three of the satellites to tack on capacity and enable global broadband service coverage.
(Source: Viasat)

The addition of the 150-Meg tier will give Viasat some improved competitive footing with new rivals such as Starlink, a satellite broadband service from Elon Musk's SpaceX that's being powered by hundreds of low-Earth orbit (LEO) satellites. Starlink, which recently surpassed 400,000 subscribers worldwide, sells a baseline residential service delivering 100 Mbit/s to 200 Mbit/s for $99 per month, plus $499 for the required hardware. Starlink also offers a business-focused premium satellite broadband service that delivers speeds up to 500 Mbit/s.

Viasat introduced its speed bump after several quarters of sluggish subscriber growth in its home broadband business. The company has recently opted to use its existing satellite capacity to help fuel its growing in-flight connectivity business instead of its home broadband efforts.

Viasat will have more capacity to spread around when it starts to launch the first of three ViaSat-3 satellites that, eventually, will enable Viasat to provide global satellite broadband coverage. The first ViaSat-3 satellite, now set to enter service in 2023 following a series of delays, will cover the Americas. A second ViaSat-3 will cover Europe, the Middle East and Africa (EMEA), and a third will cover Asia Pacific.