Life is no longer the same for Liliia Malon. How could it be? She is telecom commissioner at the National Commission for the State Regulation of Electronic Communications, Radio Frequency Spectrum and the Provision of Postal Services (NCEC), Ukraine's regulator of digital infrastructure and services.

"Working long hours used to be normal, before the war, but at least you had some time off at the weekend," she told Light Reading on a WhatsApp voice call. "Now it's 24/7. Definitely. You don't have a long-term or even a mid-term strategy because everything is changing every moment. You need to react immediately. You don't have time to think. You need to make decisions very fast." 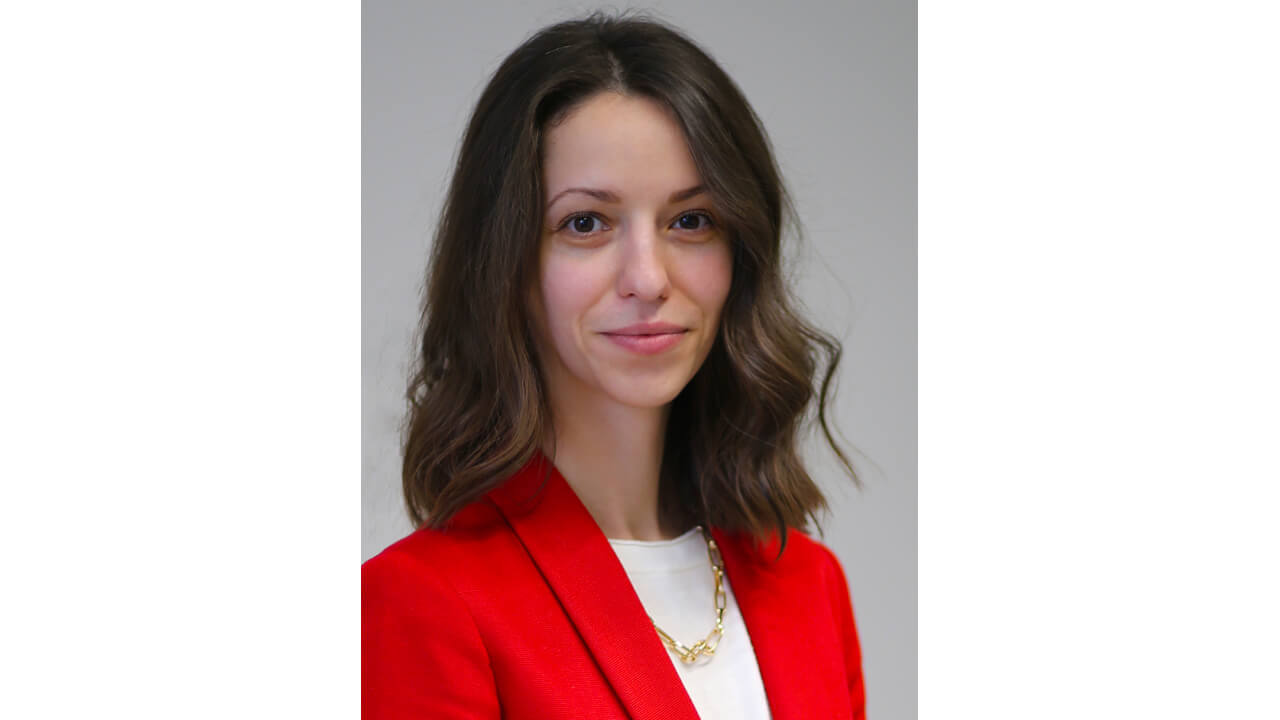 Since Russia invaded Ukraine on February 24, Malon's role at the NCEC has changed dramatically. "I'm trying to help operators get necessary equipment, which is a huge task, and working on isolation and sanctions against the Russian Federation at an international level, including within international sectoral organizations," she said. "Helping to protect refugees is another very important task. In peaceful time you couldn't imagine that such things could be on your agenda."

But just as Malon's work has changed, so have ways of working. She calls it a more horizontal approach, where close-knit collaboration between public and private sectors, and between different government departments, is now paramount.

"It doesn't matter what state bodies you represented in the past or what your personnel role was in an organization," said Malon. "Now we all play in one big team, and this team is called Ukraine."

Perspectives have also changed. Recalling her first video conference call with European colleagues after the invasion  the second week into the war  Malon said she was smiling. They asked her why.

"I told them if you're still alive  if you can eat and sleep  it's more than enough to smile," she said. "In these circumstances, if you're not under the shelling or you're not in the shelter, it means you're okay and you should work."

When it comes to calling for more assistance abroad to defeat Russia, Malon pulls no punches. Russian aggression needs to stop at Ukraine's door, said Malon, to prevent escalation.

"Ukraine is fighting for Europe and the whole of civilization," she argued. "Other countries don't want to see their children die, or their women raped, or their old people killed. They should support us and ask themselves if they are doing enough."

Malon is thankful to partner organizations that have lent their support, including national regulatory authorities in the European Union, BEREC and the European Commission. She welcomes, too, the recent joint statement by 24 mobile operators in the EU and three in Ukraine  Kyivstar, Vodafone Ukraine and lifecell  to reduce roaming tariffs for Ukrainian refugees and cut prices for international calls.

"This is an unprecedented and exceptional step," said Malon.

Use of Starlink satellite equipment, she added, has also proven extremely useful in providing a transport network for mobile network operators in places where communications infrastructure has been badly damaged.

That said, Malon feels that there's room for stronger backing.

"The world telecom community should be one strong voice to stop Russia and support Ukraine," she said. "Now is the time for bold decision-making and not getting bogged down in legal frameworks that weren't designed for wartime." 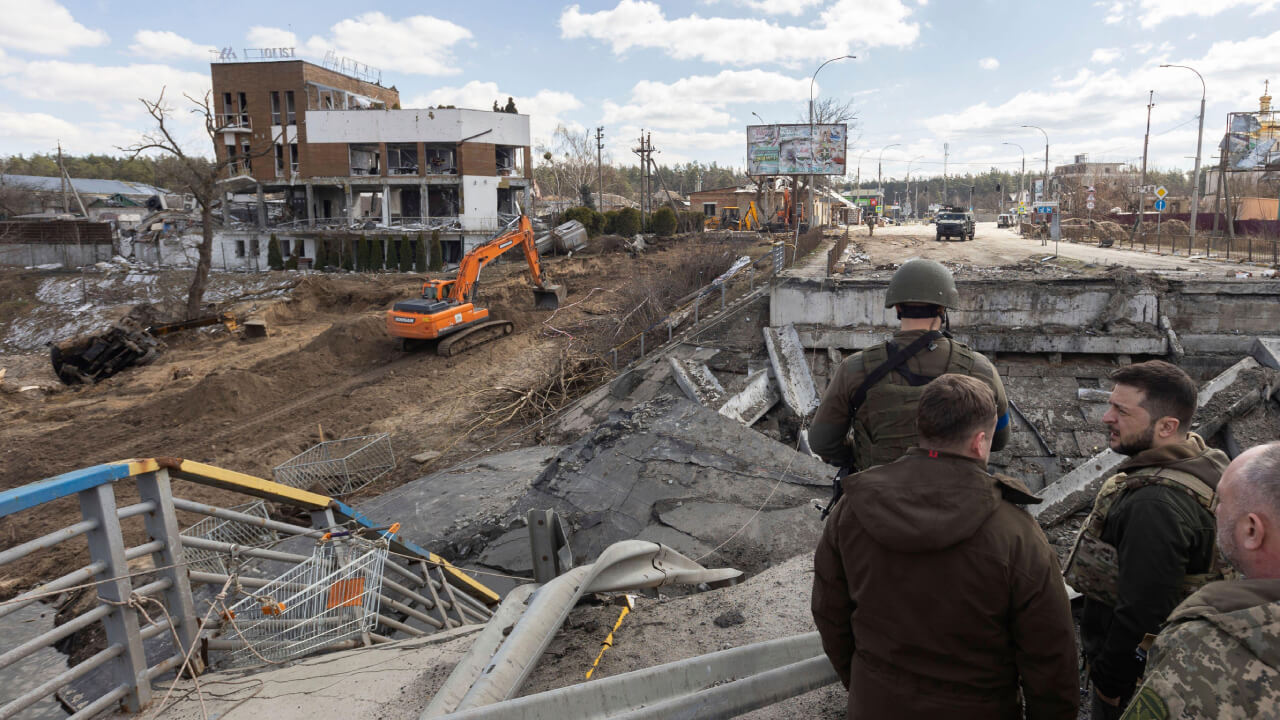 Ukrainian President Volodymyr Zelensky, right, views the destruction of the Irpin Bridge on the M-06 Kyiv - Chop highway during a tour of the aftermath of the Russian invasion, April 4, 2022, in Bucha, Kyiv Region, Ukraine.
(Source: Tommy E Trenchard/Alamy Stock Photo)

Malon wants to see more effort in enforcing sanctions, including those that say companies should not provide communications equipment to the Russian Federation. A block on Russian roamers in the European Union is also on the telecom commissioner's wish list.

"That would be a wake-up call to the Russian people, because then they would have to consider the reasons why they can no longer use their mobile phone in the EU," she said. "And if Russians can't roam in Europe, it means they'll have to buy local SIM cards and pay money to European operators, not Russian ones."

Blocking Russia from international organizations to emphasize that it's unacceptable to play a part in the civilized world while committing "inhuman behavior," is also something that Malon encourages. She questions why the GSMA has not suspended all Russian operators from membership status rather than just singling out MegaFon for exclusion.

Securing equipment donations from European operators is progressing. Malon expects the first batch to be delivered in the next few weeks. But the list of requirements is growing daily.

Ukraine is still desperately short of mobile containers, with all the necessary internal wiring, for fast deployment of GSM 900/1800 and LTE 900/1800 basestations. Transponders for DWDM Mux/Demux at 10G, 40G and 100G are another pressing requirement, as are power supply units.

"Operators are doing their best to repair their networks and infrastructure very quickly," explained Malon. "It means that after 50 days of war, most people in Ukraine have access to communications. Everyday, as you can imagine, we have huge damage on our telecom networks."

Within occupied cities and towns, however, network repair is almost impossible. One of the priorities for the Russian army is to destroy TV towers, mobile basestations and fixed-line infrastructure.

"They want to insulate people and demoralize them," said Malon.

In Bucha, a city near Kyiv, where Russian troops have withdrawn  and where they are accused of committing war crimes  communications infrastructure was totally destroyed.

However, neither NCEC's internal nor external communications have experienced major disruptions. Due to remote teleworking practices established during the pandemic, there wasn't a need for sudden changes.

Regular video conferencing meetings still take place with other state bodies and mobile and fixed operators, including Ukrtelecom, the country's biggest fixed-line operator, to discuss the latest problems and challenges. "We have video conferencing calls at least three or four times a week with operators, which can last for at least two hours each," said Malon.

Close collaboration between NCEC and operators, as well as other state bodies, has yielded impressive results. On March 7, the three mobile network operators implemented national roaming (covering voice, SMS and data at 2G and 3G base speeds) in places where fighting had broken out. If a subscriber network goes down, they get redirected onto another.

It took just under one week to get the scheme up and running. Three days later, it was extended nationwide. For the first five days of availability, 1.3 million subscribers used the service.

"In peacetime the discussions needed for this could easily take several months," said Malon. "All the negotiations were done very, very quickly and showed state and business playing in one team."

"One of the main priorities is that people should have access to communications, not only to call relatives and friends to ask how they are. It's also about people's lives  to call emergency services, to be aware about evacuations, and maybe even to warn about chemical attacks."