The Federal Communications Commission (FCC) has collected plenty of commentary on its plan to require broadband "nutrition labels" for Internet services. The agency, which unveiled the plan in January, wants broadband providers to display easy-to-understand labels so that consumers can comparison shop for broadband services. 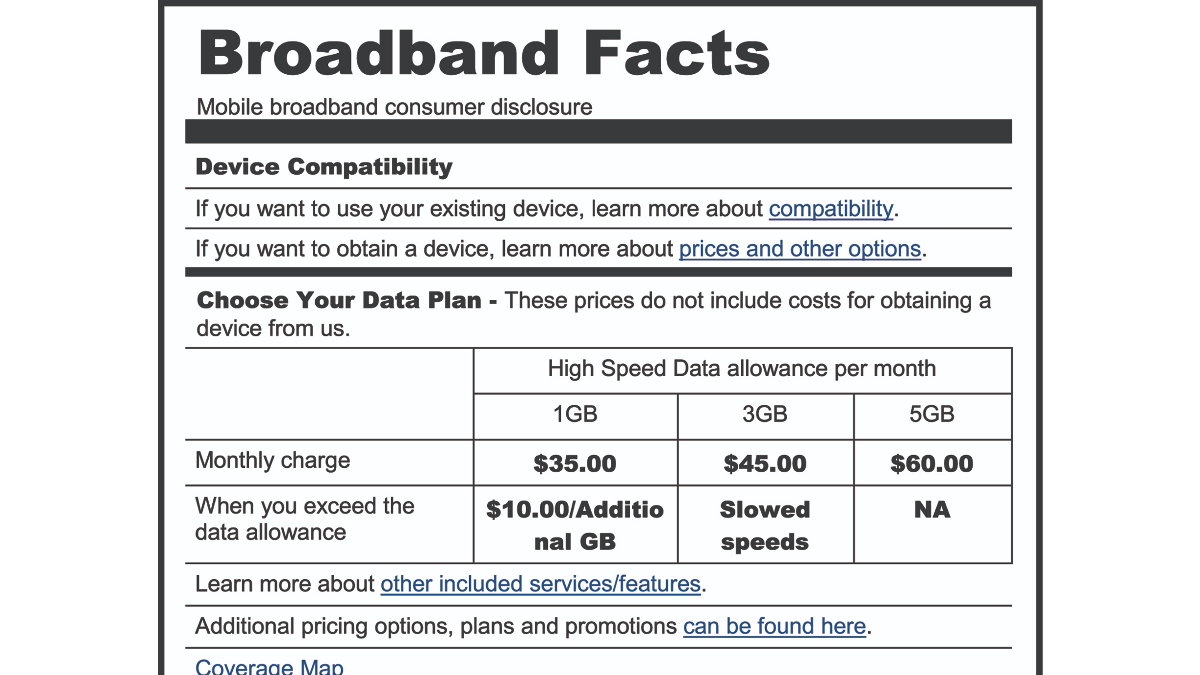 The FCC has proposed some broadband labels. Click here for a full version of this image.
(Source: FCC)

Now, the agency is in the difficult position of implementing the plan with what will probably be a deadlocked vote between two Republican commissioners and two Democratic ones, as confirmation of Gigi Sohn as the fifth commissioner looks unlikely.

After two lengthy FCC hearings and thousands of pages of filings, here are seven unanswered questions about the FCC's proposed broadband nutrition labels:

Recently, I was trapped in a traffic jam on I-70 near the Eisenhower Tunnel here in Colorado. Both the AT&T and Verizon wireless networks ground to a halt because they were designed to handle a relatively small number of cars driving past at 70 miles an hour, rather than thousands of motionless cars all checking the latest traffic updates.

Other service providers are impacted too. Analyst Doug Dawson with CCG Consulting wrote that the FCC's proposal contemplates "typical" speeds. "What does typical mean?" he wondered. "Consider a Comcast market where the company sells residential broadband that ranges between grandfathered 50 Mbit/s and 1.2 Gbit/s. What is the typical speed in that market? How will any consumer be able to judge what a typical speed means?"

Added Dawson: "Will a cable company tell a customer that their neighborhood node is oversubscribed, which accounts for slowdowns at peak times?"

As Techdirt noted, labels will only be applicable in markets where there is more than one competitor. "With so many US residents living under a monopoly (usually Comcast or Charter), there's simply no penalty," the publication noted.

Indeed, even here in my suburban Denver home, I only have two options for Internet services. Comparing the two isn't terribly difficult.

The situation is much different in grocery stores, which typically carry thousands of products that are constantly changing. There, nutrition labels are more helpful.

3. Do consumers really need to know about packet loss?

The FCC has proposed adding information like early termination fees and overage charges to its labels, which could be helpful. But it also suggested adding "packet loss," "latency" and "network management practices." That might be a bit much for some consumers.

Indeed, as AT&T pointed out, "lower packet loss numbers do not necessarily imply faster or 'better' services." The carrier added that "to the contrary, prominently displaying packet loss data on the label is likely to incentivize providers to try to lower the packet loss measurement, at the expense of quality of service."

Consumer Reports suggests that the solution is to educate consumers: "The resource we envision could improve digital literacy by providing consumers with educational resources that define the importance of download and upload speeds, latency, and other network performance features."

But that would certainly defeat the goal of making things simple.

4. Where should the labels be?

Food nutrition labels are almost always small and on the package itself. But where should broadband labels be located? It's a particularly difficult question, considering that the labels themselves might be lengthy if they contain information about network management practices.

Starry suggests that the information be located "on a well-designed webpage" or somewhere that's "easily and directly accessible via an obvious and well-marked link." However, most providers would probably argue that they're already providing this kind of information.

Continued Starry: "The commission could even consider requiring a QR code on any printed advertising material that would take the consumer directly to the pertinent information, making it easier and quicker for consumers to access it."

But this suggestion assumes that all shoppers would be able to access a QR code  which is ironic considering that they would need Internet access first in order to do so.

Another suggestion: Including the data on customers' bills. But that's again a bit ironic, considering that customers wouldn't see the label until after they have agreed to pay for services via a bill.

5. What about that Disney/HBO/Netflix subscription?

One of the FCC's goals is to provide clear, apples-to-apples pricing comparisons. But what if Verizon is offering a free subscription to Disney+ and its rivals are not?

"Several interrelated consumer decisions, such as whether to purchase bundled services, multiple lines, or alternative data allowances, can affect the bottom-line price of the broadband package the consumer chooses," T-Mobile argued.

The operator continued: "These features of the broadband market reflect robust competition and should be encouraged. At the same time, this variability can make it difficult to provide consumers with a static broadband label that accounts for the combination of services that best fits their needs."

There are lots of factors that go into pricing telecom services. First, most operators offer promotional rates that might increase over time. Indeed, such offerings have generated so much ire that they likely generated the desire for broadband labels in the first place.

But that's just one factor in pricing. For example, the Open Technology Institute reported that modem rental fees in the US can add an additional 75% to the cost of monthly Internet service, while router rental fees can add up to an additional 65% on top of advertised costs. Other costs may include installation fees or the purchase of Wi-Fi extenders.

"These monthly costs can be manipulated and confuse consumers about the true cost of the equipment and services over time," Starlink, from Elon Musk's SpaceX, argued. And for Starlink, the company's $600 receiver is required in order to receive its satellite services.

7. Can we trust the labels?

An FCC report released in 2019 found that Verizon, T-Mobile and UScellular provided inaccurate coverage maps about 40% of the time.

Partly as a result, the FCC is working to develop better broadband maps before it allocates fully $40 billion to finance the construction of broadband networks in rural areas.

This situation highlights the trouble with broadband data collection in the US. If providers can't even tell the FCC where they are actually providing services, can they be trusted to provide accurate broadband nutrition labels?

Moreover, who should be checking the labels for accuracy? And is that a worthwhile use of taxpayer money?

I understand the reasoning behind the FCC's broadband labeling efforts. I also understand that the agency implemented voluntary labels in 2016 and is now only moving forward on mandated labels because of Congressional legislation that requires it to do so.

Nonetheless, there are some things that I, as a broadband customer, actually do want to know. For example, I want to know whether there are backup generators inside the network, in case the power goes out. I also want to know how reliable the service is  how many outages does that particular provider suffer every month?

Finally, I want to know exactly what the provider is doing with my data. For example, a report last year disclosed that AT&T holds onto its customers' mobile location and usage data for seven years. In comparison, T-Mobile holds onto its own subscriber data  including call records, cell site connection information and text content  for around two years before discarding it. Verizon holds onto such data for one year. This information seems important, and I'd like to know more about it.

Pollen Mobile, Helium and Xnet are some of the companies hoping to upend the traditional mechanics behind wireless networks. And they're helping to bring some fresh blood into an increasingly staid industry.

Debating the role of hyperscalers in 5G