Frontier accelerates 2022 fiber buildout by up to 20%

Frontier Communications is speeding up its fiber buildout plans for 2022, announcing this week that deployments for the year could come in as much as 20% higher than originally forecast.

Frontier is poised to exceed its 2022 build target of 1 million fiber locations by an additional 100,000 to 200,000 homes, company CFO Scott Beasley said this week at the MoffettNathanson Annual Media and Communications Summit. 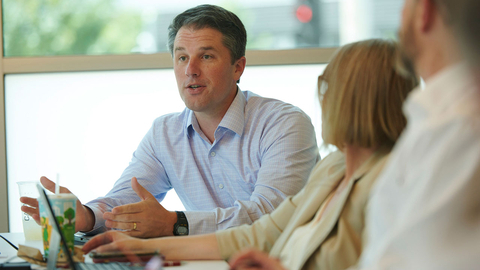 Unlike US cable, Frontier does not see low move activity as an impediment to its rate of broadband subscriber growth. "We've seen record fiber net adds, even in a low-move environment," Frontier CFO Scott Beasley (pictured) said.
(Source: Frontier/Business Wire)

Frontier remains on track with its plan to expand its fiber-to-the-premises (FTTP) footprint to 10 million locations by 2025  a number that includes Frontier's "Wave 1" and "Wave 2" builds. Fiber buildout costs for Wave 2 remain in the range of $900 to $1,000 per location, Beasley said.

"We are ahead of plan and looking to really accelerate the build throughout the rest of the year," he said.

Looking ahead, Frontier intends to bump the rate of its buildout to 1.6 million locations in 2023, and to 1.7 million in both 2024 and 2025, Beasley said, noting that Frontier is fully capitalized through mid-2024.

Beasley was pressed to defend the company's decision to push ahead now with a private offering of $1.2 billion at an annual interest rate of 8.75%, rather than to wait until Frontier's financial results improve a bit more as it rakes in more fiber customers.

Beasley reasoned that the move "sends a strong signal" to potential competitive overbuilders to look elsewhere. He also said it would represent a vote of confidence to Frontier's supply chain partners.

"We have roughly $4 billion of liquidity," he said. "[That] gives us the ability to put our heads down and build as fast as we can without needing additional capital for the next two years."

Frontier is still mulling what to do with a "Wave 3" footprint comprised of another 5 million locations that might be upgraded to fiber by tapping into government subsidy programs, forging partnerships or by executing possible divestments or system swaps. However, Frontier's early successes and lessons learned in the Wave 2 buildout gives the company confidence that the returns it can squeeze out of Wave 3 are better than originally anticipated.

Frontier analyzed Wave 3 while the company was getting through a bankruptcy reorganization and has since refined its cost-to-build capabilities and revenue projections in a way that's expected to generate a better return on investment, Beasley said.

Frontier continues to navigate supply chain constraints, benefitting from multi-year deals forged with suppliers before the issue became pervasive in telecom. Those deals give Frontier confidence it can secure what it needs for Wave 2 while also keeping costs in check, Beasley said.

But he acknowledged that Frontier is seeing some pressure with certain network electronics and any products linked to the global chip shortage. "That's probably where we're working the most to make sure we have the supply we need," Beasley explained.

And while the labor market was tight in the first quarter of 2021, it started to loosen up in March, which was the best build month for Frontier so far. "It's tight, but it's something we're managing through well," Beasley added.

"I don't think it's been an impediment. We've seen record fiber net adds, even in a low-move environment," Beasley said.

Frontier, which added a record 54,000 fiber subs in Q1 2022, hopes those numbers will only accelerate if and when move activity and churn levels start to normalize.

Beasley also reiterated that Frontier has yet to see a noticeable impact from competitive fixed wireless access (FWA) services, despite the fact that a recent study shows that T-Mobile's home broadband service is gathering traction in rural areas.

If Frontier were to see FWA make a dent in "ultra-rural markets," the company would look to accelerate its buildout in those areas. "Once we're there with fiber, fixed wireless is a much less compelling proposition for the customer," Beasley said.

And he holds that fiber has a clear advantage on usage trends, noting that average fiber customer data usage is approaching 1 terabyte per month. "Fixed wireless networks are not architected for that level of throughput," he argued.