A new OpenVault study found that broadband data consumption rose on a year-over-year basis, but also discovered that a group of "super power users"  defined as those who gobble down more than 2 terabytes (TB) per month – is growing faster than those who consume a mere 1TB per month.

The super power user category climbed 31% from a year ago, compared to 18% growth among 1TB power users, OpenVault found in its Broadband Insights Report for the first quarter of 2022. OpenVault, a company that specializes in collecting and analyzing household broadband usage data, bases its quarterly reports on anonymized and aggregated data from "millions of individual broadband subscribers."

Although the 2TB group is growing at a faster rate, the 1TB group remains much larger:

In the chart above, UBB refers to usage-based billing used in data policies that employ methods such as monthly data caps. FRB refers to flat-rate billing, which usually pertains to unlimited, uncapped data policies. The weighted average combines data from FRB and UBB subscribers.
Click here for a larger version of this image. Used with permission.

The implications of the findings are multifaceted. Cable operators and other ISPs will, of course, need to ensure that the capacities of their networks are staying well ahead of data usage trends. But the trend also indicates that broadband service operators that employ data-usage policies and data caps might need to reassess their monthly limits to ensure that only a small percentage of their total customer base exceeds their monthly data limits.

Among other findings, OpenVault's Q1 study found that the monthly weighted average data consumed by subscribers in the period hit 513.8 gigabytes, up 11% from the year-ago period, but down 4.2% from the prior quarter (Q4 2021). Average usage among customers with ISPs using uncapped, flat-rate billing (FRB) policies continued to pace ahead of subs with operators that employ more stringent usage-based billing (UBB) policies. OpenVault's weighted average metric combines data from FRB and UBB subscribers. 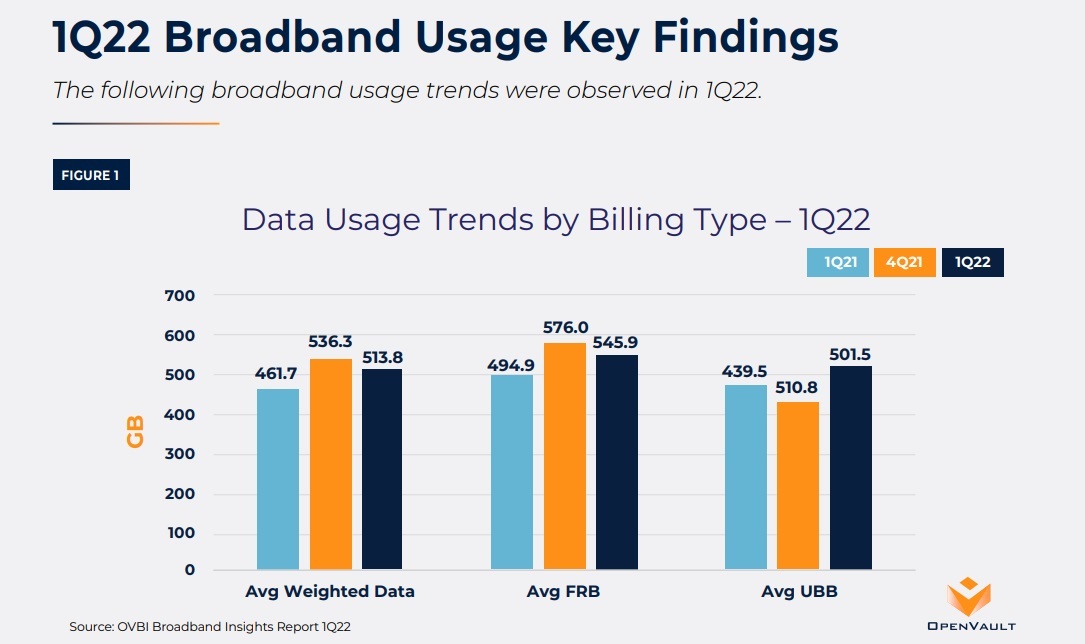 Click here for a larger version of this image. Used with permission.

Regardless of policy, average monthly usage remained above the half-terabyte level first achieved in the fourth quarter of 2021, OpenVault noted.

Customers gravitating to speed tiers of 1-Gig or more

With the speed trend heading toward gigabit and multigigabit tiers, it's no surprise that customers provisioned for 1Gbit/s or more are on the rise.

Notably, the slice of subs getting speeds of 1-Gig or higher jumped 37% from a year ago, while those on tiers of 50 Mbit/s or less shrunk 25% when compared to OpenVault's study from Q1 2021.

Here are a few other data points from the study: