Morning trading in New York wiped more than 10% off the value of Ciena's shares after the optical network equipment specialist forecast lower sales than analysts were expecting for its upcoming fiscal fourth quarter.

The stock dived after the company said it was expecting to generate revenues of between $720 million and $750 million during the August-to-October quarter: Analysts had been expecting, on average, revenues of about $770 million.

Ciena Corp. (NYSE: CIEN) is used to wild fluctuations in the value of its stock, and at its current price of $21.72 it continues to trade comfortably above a 52-week low of $18.94 in November last year. 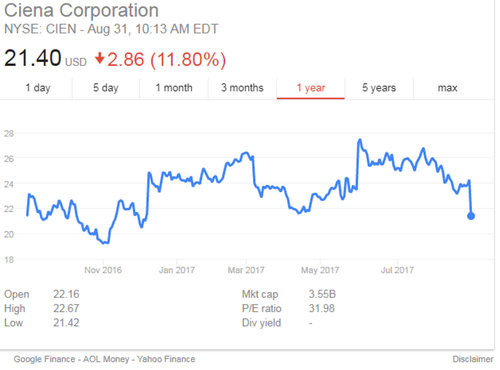 Ciena's latest stock dip is nothing new for a company that has a rollercoaster of a share price history chart, as this graphic for the past 12 months shows.

The share price fell even though Ciena turned in a strong performance for its fiscal third quarter, with revenues up 8.7%, to $728.7 million, and net income rising 79%, to $60 million, compared with the year-earlier quarter. (See Ciena Reports Fiscal Q3 Financials.)

"We delivered another solid quarter with strong revenue growth and profitability, and we took additional market share through our diversification and innovation leadership," said Gary Smith, Ciena's president and CEO, in a company statement.

Moreover, sales growth was accompanied by a reduction in operating expenses, boosting Ciena's operating margin to 11.3% from 8.5% a year earlier.

Even so, while the company's main networking platforms business had a very successful quarter, with sales up 9.5%, to $592.3 million, there were mixed fortunes elsewhere.

The much smaller software division also did well, growing revenues by a third, to $42.3 million. But sales at the global services outfit were down 4%, to $94.1 million, because of setbacks in consulting and network design as well as installation and deployment projects.

Ciena reported sales growth across all regions of the world except Europe, the Middle East and Africa, where revenues fell 7.9%, to $96.1 million.

While there had been some concern in the analyst community about the impact of potential spending cuts by US telco giant AT&T, Ciena executives blamed belt-tightening in the US government sector and related cuts by some regional players for the disappointing outlook.

"If you take the consensus [regarding analyst expectations for fourth-quarter sales] being $770 million and our midpoint being $735 million, I would say more than half of that [$35 million difference] is related to government business that we do not think will materialize," said Smith during an earnings call with analysts. "This is a budgeting issue affecting government spending and I would think that as we get to next year they will start to free up."

Pressed for even more detail, Smith told analysts that government cuts were responsible for "$25 million of the $35 million" difference between Ciena's forecast and analyst expectations.

Analysts covering Ciena regularly fret over the implications of capital expenditure reductions by AT&T Inc. (NYSE: T) and Verizon Communications Inc. (NYSE: VZ), which together account for 28% of the vendor's revenues.

During the earnings call, Ciena revealed that spending by AT&T accounted for $121 million of its third-quarter revenues, or 16.6% of the total. Verizon stumped up another $83 million, or 11.4% of overall quarterly sales.

In a research note written before today's results were published, Michael Genovese, an analyst with MKM Partners, had drawn attention to the concerns about spending cuts at AT&T but downplayed those fears.

"Several of our competitors are saying they are worried about the potential for AT&T to be weak for Ciena due to soft capex and/or project delays," said Genovese.

"It is difficult to see Ciena's strength at AT&T in AT&T's overall capex numbers or in the commentary of AT&T's non-optical equipment vendors," added Genovese. "Nevertheless, our checks strongly suggest that AT&T's packet networking and long-haul DWDM [dense wave division multiplexing] capex with Ciena are up meaningfully [in the second half of Ciena's 2017 fiscal year]."

Phil_Britt 9/3/2017 | 9:19:16 PM
Could Get Worse Financial analyst on CNBC said they were expecting Ciena to trend down for some time -- no positives in the pipeline.
Reply | Post Message | MESSAGES LIST | START A BOARD

James_B_Crawshaw 8/31/2017 | 5:39:25 PM
Life emerging on Blue Planet Interesting to see Blue Planet now has 4 live deployments, 8 active trials and 25 other engagements. Time for that to start turning into meaningful revenue. Software is just 2% of Ciena's revenue at present and that is mainly EMS and NMS, not Blue Planet. Last fiscal year (ending Oct 2016) Blue Planet (which came with the $400m Cyan acquisition) brought in $6.7m of revenue ie 0.3% of Ciena's total revenue.