What did the world do during quarantine? Watch more YouTube

Global Internet traffic rose 40% due to the COVID-19 pandemic, essentially cramming more than a year's worth of growth into just a few weeks, according to Sandvine. However, thankfully for network operators, much of this growth occurred during the day rather than during peak evening hours, meaning that most networks were able to survive the initial onslaught of traffic increases.

And now, as countries around the world begin to loosen stay-at-home orders, the great COVID-19 Internet traffic spike of 2020 appears to be finally, slowly abating.

But this raises the next big question: What lessons can network operators learn from the coronavirus? According to Sandvine's new COVID-19 Global Internet Phenomena Report, there's one big, obvious takeaway: YouTube is really, really popular.

"During the COVID-19 pandemic, YouTube is a major source of information for consumers  not just on what is happening in the world, but also on new recipes, fitness programs, DIY masks, and a whole host of topics that people seek an authoritative voice on  which YouTube is regarded to be the worldwide leader in," the firm wrote in its report. It noted that YouTube accounted for roughly 15% of all global Internet traffic during the first few months of the global shutdown, up around 7% over last year. Moreover, the firm said that figure would have been higher if YouTube and other streaming video providers didn't scale down their bitrates to reduce the weight of their offerings on broadband networks. 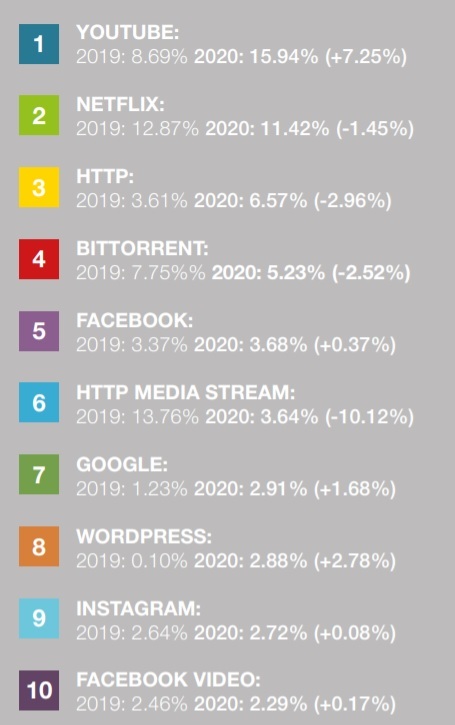 Sandvine explained that this finding is particularly noteworthy because the global quarantine essentially funneled all Internet traffic onto a single pipe  consumer broadband  instead of it being spread out as normal across mobile, enterprise, education and public Wi-Fi networks, some of which cannot be tracked by network-monitoring companies like Sandvine.

"From a Internet phenomena perspective, this unprecedented global shutdown has led to a unique opportunity to once and for all answer the question: What is the most popular content on the Internet?" the firm said. "YouTube," it noted, "is the undisputed king."

To be clear, Internet usage was not uniform across the world. For example, Netflix topped the charts in the Americas while YouTube was the most popular service everywhere else.

Further, the firm noted that two other categories  gaming and social sharing  saw outsized gains in addition to video streaming. That was due to popular games like Roblox and Fortnite, alongside social services like Instagram, Facebook, WhatsApp, Twitter and TikTok. Sandvine reported that video, gaming and social sharing accounted for 80% of all Internet traffic during the pandemic.

Finally, the executives at Sandvine offered a few suggestions to network operators generally about how they should handle their network operations, in light of the effect that COVID-19 has had on networks globally. The firm said operators need to manage large sources of traffic such as game downloads  indeed, they noted that one download of the new Call of Duty game is equivalent to streaming 14 hours of HD video. The executives suggested operators prioritize real-time traffic like videoconferencing services while pushing game downloads during breaks in traffic. They also said that operators should make "critical" applications free to users to access, and that they should limit the amount of traffic heavy users can generate  though those suggestions are obviously contingent on whether net neutrality regulations are in play in a given location.