The telecom market has a history of router startups that pitted their wits against Cisco et al and limped their way to the network hardware graveyard.

DriveNets already looks like a different proposition. The Israeli company has: a genuine cloud-oriented philosophy; an experienced team that has launched, grown and sold telecom startups to Cisco and AT&T and existing commercial traction with major network operators.

And now it has a pot of cash with big-name VC backing in the form of Bessemer Venture Partners .

Gird up your loins, folks -- this looks like a doozy!

So what's the story? Despite the name, this is nothing to do with connected vehicles.

DriveNets, in essence, has developed a highly scalable routing software stack (including management tools) that runs on high-spec white box hardware and upon which multiple functions can run and which, importantly, gives the network operator very clear visibility into growth-related costs thanks to a non-linear pricing model (we'll come to that shortly).

The proposition to operators is that they can cope with the rapid and somewhat overwhelming growth in network traffic (mainly video) with a simplified way to scale capacity, based on shared resources, that does not result in out-of-control costs.

"We are solving two main problems for telcos," claims founder and CEO Ido Susan, who previously launched SON startup Intucell and sold it to Cisco for $475 million in 2013. (See Cisco to Buy AT&T's Favorite SON Startup.)

"We are tackling the [economic] challenge of data growth -- currently telcos need to add more and more capacity but without getting more revenues. Secondly, the networks today are still based on router hardware [functionality] sourced from multiple vendors such as Cisco, Juniper, Huawei, Nokia [Alcatel-Lucent] and others, with multiple operating systems that make them a nightmare to manage," and expensive, due to licensing costs. "We simplify the network, convert hardware to software and detach growth from cost," Susan tells Light Reading. 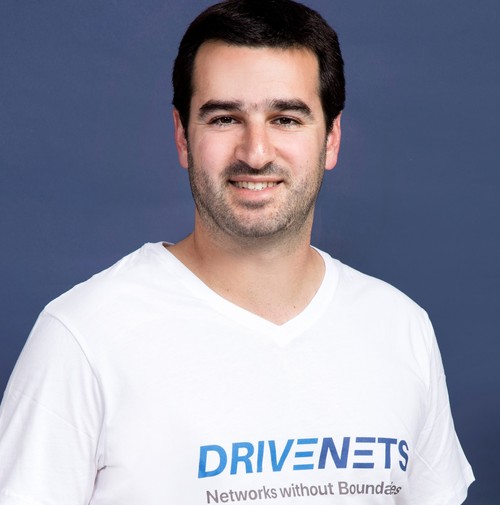 DriveNets founder and CEO Ido Susan has former employer Cisco, as well as Juniper, Huawei and Nokia, in his sights.

Susan and his co-founder Hillel Kobrinsky, who launched and built up web conferencing specialist Interwise before selling it to AT&T for $121 million in 2007, founded DriveNets in 2015 to tackle these challenges but soon realized that regular x86-based servers wouldn't deliver the processing power needed for the company's Network Cloud software, which is used for all types of router, from core to edge. (See AT&T to Buy Interwise.)

"Those x86 white boxes are suitable for switching and functions such as firewalls, not routers running at high scale. So we have partnered with Broadcom, Foxconn and others to help develop a white box for CSPs, with five-nines reliability, the capability to handle 'elephant flows'  it has been designed as if it was for an Amazon, Facebook or Google data center."

DriveNets doesn't sell those servers, which provide the hardware building blocks (based on Broadcom Jericho2 and JerichoPlus processors) needed to run the vendor's software -- the operators (and indeed anyone else) can buy them direct from the ODMs (original design manufacturers) and so are in control of their white box selections.

The Drivenets software runs efficiently on those servers, which can be stacked together as building blocks and run as a single entity but, notes Susan, without the inefficient interconnectivity needed to make incompatible hardware elements work together. "In regular networks there are lots of links and connections and so lots of redundancy," but as more capacity is needed in a Drivenets deployment, extra pizza boxes are added to provide additional capacity in a simple configuration, where each box doesn't need to be managed as an additional independent box but is managed logically as additional capacity in a single platform deployment that can offer multiple functions.

The concept has attracted support. DriveNets is also commercially deployed in one US Tier 1 operator network, generating revenues that run to tens of millions of dollars, says Susan. The company also has trials with five other US major operators, including cable operators, and two in Europe, none of which the company is willing to name just yet.

All of this puts DriveNets in direct competition with Susan's former employer Cisco (about which he, diplomatically, has only good things to say) as well as all other incumbent router vendors. Those companies, he says, have "no incentive to kill their own businesses" by developing some equivalent. It would also be very hard: "They would have to rewrite their network operating systems from scratch to be truly cloud-native" and gain the same scale and management benefits. They will only go down that route as and when they accept they have lost the battle against the cloudification of network functions, believes Susan.

But this doesn't mean Susan and his team have an easy sell. Telcos are very conservative and are always concerned about the business case of accepting new suppliers and how new technology will be integrated and managed by their operations teams.

This is why the initial carrier deployment, he notes, is dealing with additional capacity requirements currently, and so is a capacity bolt-on as such, acting as a PE (provider edge) routing platform to deal primarily with the dramatic growth in video and data traffic flowing across the customer's network. Bolting it onto the network is relatively (in carrier context, anyway) simple, boasts Susan. The white boxes ordered by customers are loaded with DriveNets software and are managed by a centralized DriveNets orchestration system that can itself be managed by third-party management and orchestration tools such as ONAP: Much of the vendor's development resources and time is spent on lifecycle management orchestration, the CEO notes.

And for operators wanting to perform a test or proof of concept, there's no need to start ordering new servers and initiative a whole new test network bed -- such trials can be done using deployments in Equinix data centers.

And if DriveNets passes technical tests, what about the business case?

The cost model is simple and, as mentioned, doesn't link capacity growth to cost. Of course any capacity growth involves extra servers but even the carrier-grade servers sourced by the operators are a fraction of the cost of taking a regular, traditional router: Susan claims an operator would be saving money even if Cisco offered a 90% discount on its list prices. (Yes, that's a bold and bullish claim but it can now be referenced, right?)

The DriveNets software has a flat license fee, no matter how much capacity is added: the price stays the same whether you have it running on ten servers or 1,000 servers. This is the flat pricing model also espoused by another Israeli company, Radcom. (See How Radcom's Pricing Model Is Set to Disrupt the Market.)

This encourages operators to build out capacity and become loyal customers while at the same time having a firm grip on cost visibility. For DriveNets, the model means that it needs to sign up customers, renew the flat fee licenses and develop applications -- for example, a virtual border network gateway (BNG) -- that run on top of its initial software platform.

The model has now attracted investors. Susan says the company was looking for $75 million but took $110 million from Bessemer (which backed him previously, so he knows and trusts them) as well as Pitango Growth and some private backers. Susan would not give a specific number for a valuation, but says it is "several hundreds of millions."

The CEO says the plan is for this to be the only round of funding: The money will be used to ramp up the sales, marketing and customer support teams. Currently the Ra'anana, Israel-based company's 150 or so staff are mostly focused on R&D.

There's no doubt that the proposition is right in the next-generation networking ballpark of the network operators and a non-linear cost model will also be appealing (as long as the fixed license fee isn't prohibitive, of course!).

DriveNets now has the money, traction and drive to give the incumbent router vendors something to be wary of: This is a company worth tracking and one that could become the next Arista.

dwx 2/18/2019 | 3:27:01 PM
Re: Smart I believe their initial use case is in Internet peering, where they are acting as an off-box control-plane speaking to the peers, and controlling hardware forwarding elements connecting peer to core as if they were a single entity.  A bit like multi-chassis LAG on steroids where you an add connections ad-hoc across the fabric or add new elements and simply LAG them together.

Pizza box and "eliminating complex interconnects" do not really belong together.  The lengths that FB, Google, Amazon, etc. go through in order to have cohesive pre-designed wiring is crazy.  They have defined compute pods because adding connections ad-hoc is a nightmare.  So I'm not sure how that translates over in this case.
Reply | Post Message | MESSAGES LIST | START A BOARD

TucIm6tx 2/18/2019 | 7:03:40 AM
There are many discrepancies and question marks over DNs Story: 1.       If they have a design based on BCM ASICs, this is not going to be a cheap design. Claiming 90% cost reduction over Cisco, whereas Cisco has its own ASIC, is more the questionable

3.       Router software include huge code base of protocols, either DN develops themselves, but this will take them many years, or they source from the like of MetaSwitch but that cannot be flat rate. Indeed DNOS has a limited set of protocol support, according to the (limited) info on their site

4.       Pizza box based scalability does not make sense. Even Compute server are blade server based. Chassis form factor is more efficient in terms of electricity and real estate-which is really what matters in date centers, not to mention control plane issues.

5.       The whole concept sounds like CORD, which did not fly for many reasons, some are detailed above

6.       What is exactly the cloud in this cloud based solution? It is a solution for data centers that by themselves implement clouds. Sounds like "cloud washing: of the solution.

Sterling Perrin 2/15/2019 | 9:36:09 AM
Smart This company has found the right spot where white box is appealing for telecom and VCs have recognized this. There's a long history of dumb VC money (see "Optical Networking" circa 1999) but this is a good bet - not a sure thing but a good bet on the technology.

5G will be a big factor. Timing of adoption by operators may make or break this company. We know AT&T is driving toward this white box router model but how quickly will the rest of the market follow? In issues of timing, the big vendors have the advantage, because they can weather the delays. Any start-up is invested fully in both a technology and a timeline.