Arista is taking the wraps off its second-generation 400G routers, with built-in security, routing, automation and telemetry for reduced capex and opex costs, the company announced today.

"The products we're introducing provide the highest density and highest performance of anything in the industry," brags Martin Hull, Arista associate vice president, systems engineering and platforms, in an interview with Light Reading. The Arista 7800R, 7500R and 7280R Series routers, with support for 100G and 400G Ethernet, are designed for the increased bandwidth needs of telcos and other service providers in the face of emerging technologies, including edge, 5G, network functions virtualization (NFV) and IoT. Rather than having to deploy separate devices for networking, security and telemetry, operators can run it all on a single device. "That simplification of their infrastructure makes them more agile on their journey," Hull says.

Arista's goal for the new product is to bring the scalability, simplicity, cost optimization and streamlined operations of so-called "cloud titans," such as Microsoft and Facebook, who are Arista's primary customer base, to telcos and other service providers.

Arista launched its 7060X4 switches in October, a relatively low density 1U product with 32 ports per system, typically deployed in the data center, Hull says. The new product, available in fixed and modular configurations, is higher density, at both 400G and 100G, with added security, routing, telemetry and automation. 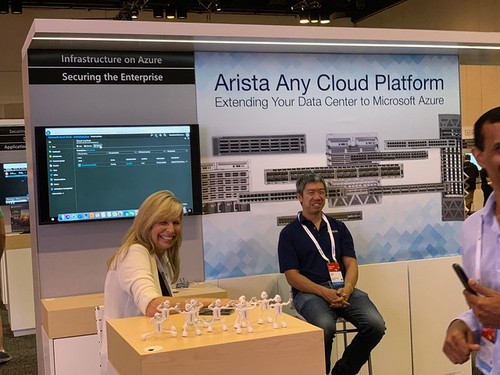 Arista at the Microsoft Ignite conference, 2018.

Arrcus claimed an industry first with a white box 400G switch in January.