"I was born in 2027  after the bandwidth riots," says Wade Watts, the central character in Steven Spielberg's Ready Player One, as he marches between burnt-out vehicles and teetering skyscrapers made of derelict, corrugated-iron homes in the movie's dystopian landscape.

The intriguing reference is never explored, and yet bandwidth riots seemed a real possibility this week as governments battling the outbreak of COVID-19 put countries under lockdown. Panic about the disease has already sparked supermarket fights over groceries and toilet paper. As people shelter inside their homes, usage of network and online services has rocketed. The future depicted in Ready Player One, in which a largely housebound human race has lost itself in virtual reality, drew a little closer. 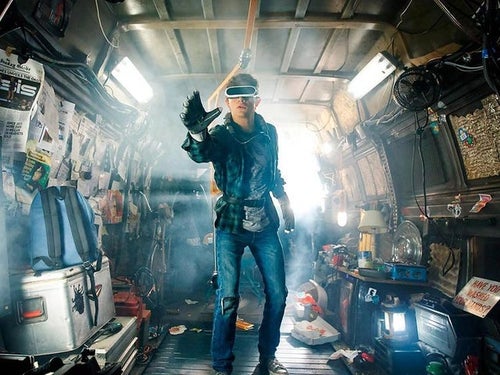 Wade Watts, the main character in Ready Player One, loses himself in virtual reality.

The good news is that networks have so far proven resilient to the shock of a bandwidth surge. Notwithstanding a few mobile outages, there have been no major reports of fixed broadband problems in European countries where COVID-19 restrictions are in place. Even the UK, with its mainly copper-based networks, has coped with an apparent explosion in traffic after Boris Johnson, the prime minister, advised the population to work at home and avoid public places.

But even if the virus disappears in the summer, as everyone now prays, it will have a permanent effect on the way people work, live and play. Network operators, plus the companies that make their equipment and design their software, have acquired an even more critically important status almost overnight. Games developers have become a more exciting prospect than ever before. Lifestyles will change forever. Once the modus operandi of social misfits, home working will become the norm. Education and healthcare will shift online. In the hobbies and activities people have pursued outside the home with friends, COVID-19 will create a void the Internet may have to fill.

Indeed, if the world is to have any chance of avoiding another Great Depression, the private and public sectors will have to evolve fast. In countries such as the UK, that should mean ditching expensive plans for new rail lines and other controversial infrastructure projects and instead using that money to support the digital transformation of the national health service and other public sector organizations. Removing bureaucratic barriers to the rollout of higher-speed network technologies is another priority for the whole of Europe.

No organization can escape this upheaval, just as no person can. And many companies, such as several in the ill-fated airline industry, will unfortunately not pull through. For others, there is an opportunity in today's maelstrom. Despite the prevailing gloom, governments and firms that quickly adapt to the new reality will create value, protect jobs and generate confidence. Authorities should already be thinking about online classes for students currently confined to their bedrooms. Companies in all sectors will need to be similarly proactive: A firm that makes gym equipment, for example, should now be considering an investment in household products and personal trainer apps.

In the telecom sector, there are some encouraging signs. In a five-point plan published this morning, Vodafone said it would pump additional funds into network capacity. It will also offer superfast connectivity to hospitals and free Internet access to educational resources for students stuck at home. In the business market, it will settle new orders with smaller suppliers in 15 days, down from the usual 30 to 60. More controversially, perhaps, it will offer people-tracking services to government authorities fighting to contain the virus.

Analysts at Jefferies remain upbeat, pointing out that erroneous predictions of capitalism's demise were rife in the aftermath of the 2008 financial crisis. In an unusual piece of research  actually entitled "How will we live, work and play?"  the company notes the upside and opportunity for many companies throughout the global economy.

"We consume less, focusing on pursuits and experiences and loved ones. We work hard but our careers don't define us anymore," it writes about the world after COVID-19 in the type of analysis rarely associated with equity analysts. "Jefferies Research appreciates the irony of positing a societal shift away from materialism while at the same time suggesting ways to invest through it. Suffice to say we will need pasta and toilet roll, too."

For other experts, many organizations already have the telecom sector to thank for their survival. "Though some consumer-facing industries closed (airlines, hotels, restaurants etc.), many have been able to keep running because of the ubiquity of telecom networks," said John Strand, the CEO of Danish advisory firm Strand Consult, in his own written take on the crisis. His analysis is also a wake-up call for many companies. "Europe is hard-hit not just because of the high rate of infection but because so many small and medium-sized enterprises are not digital."

If they are to survive this pandemic and prosper in a post-COVID-19 future, adaptation will be essential.

Like what we have to say? Click here to sign up to our daily newsletter
COMMENTS
Newest First | Oldest First | Threaded View
Add Comment
Be the first to post a comment regarding this story.
EDUCATIONAL RESOURCES
sponsor supplied content
Small cell densification for 5G
Which Path to Convergence Is Right for You?
Helping FTTx Networks Like Yours
Educational Resources Archive
More Blogs from Morris Lore
Rakuten's energy use soared on mobile rollout