Italy wants to fling 3.7B of taxpayer funds at fiber

There is a jokey sign outside some local bookstore that talks about changes during the pandemic. In the interests of saving space, the travel section has been moved into fantasy, while science fiction has been merged with current affairs, it says. Epidemiology, meanwhile, is now part of the self-help section.

It's funny on several levels, but the observation about sci-fi (SF, as purists have it) looks spot on. In the eighties, people watched Michael J. Fox whizz around on a floating skateboard, or Matthew Broderick hack into an artificial intelligence that nearly starts WWIII, and then chuckled at the outrageous improbability of it all. Unimaginative by comparison, trotting out the same old tropes, many of today's sci-fi movies look as if they were set yesterday. Some of the older films play like period dramas.

But amid today's LCD billboards, fleets of battery-powered scooters and throngs of smartphone zombies, there are still communities where the latest technology barely seems to have penetrated. And in the developed world, Italy seems to be full of them. Even its big cities are more rustic, olde-worlde charm than Bladerunner metropolis.

It's incongruous with the vision of Italy as an economy fit for the online era, and appearances are not entirely deceiving. For a start, Italy is home to western Europe's worst-performing national telecom incumbent  a company that used to be one of the region's most valuable stocks but was this morning worth only 9.2 billion ($10.5 billion) in Milan, Telecom Italia's share price having halved since mid-2017. 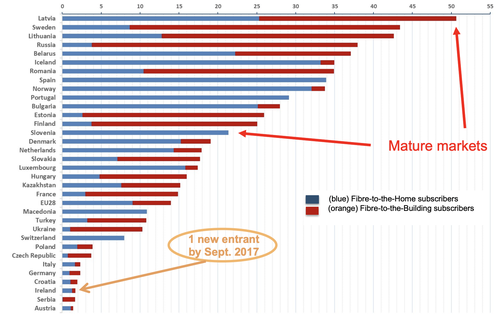 Italy has also had a miserable reputation for the quality of its broadband infrastructure. In a ranking of fiber penetration published by the FTTH Council Europe in September 2017, it came in 28th place out of 33 countries, trailed only by Germany, Croatia, Ireland, Serbia and Austria. Less than 2.5% of Italians were subscribers to full-fiber network services.

Determined to propel Italy into the fiber lead, its government is suddenly flinging public money at rollout. At the weekend, its telecom ministry pledged 3.7 billion ($4.2 billion) for connecting 7 million homes to gigabit-speed technology. It has drawn up a list of 15 regions where companies building networks can bid for access to government funds (a full breakdown is shown below). Rules stipulate taxpayers will cover up to 70% of the total cost.

Late to the party

It is a rather late intervention, though, by a country that is quickly rousing itself from a long broadband slumber. An FTTH Council Europe study in September 2021 reckoned Italy's full-fiber household penetration would hit 10% by the end of the year, a big improvement on the figure recorded four years earlier. Yes, Italy remains a long way behind European leaders such as Spain, where roughly 70% of households take fiber services. But Italy appears to be witnessing faster growth  a take-up rate of 72% between 2020 and 2021  than any country bar the UK (138%).

Italy scores even better on pure availability. Last year, around 16 million homes would have been passed by a full-fiber network, according to the FTTH Council Europe. Go back to September 2017 and fewer than 5 million were covered, its data reveals. And that dramatic gain puts Italy fourth in a forecast ranking of Italy by homes passed, behind Russia, France and Spain. Months before Italy announced its latest 3.7 billion funding plan, the FTTH Council Europe was predicting that fiber would pass almost 93% of Italian homes by 2026, leaving only 2 million completely unserved.

Italy's problem is arguably not the availability of fiber infrastructure but the demand for full-fiber services, raising doubts about the government scheme. An analysis of the FTTH Council Europe's data and forecasts uncovers big gaps between homes passed and subscriptions, compared with other countries. In the UK, for instance, the expectation is that nearly three quarters of fiber-served homes will subscribe to a fiber service in 2026. In Germany, the figure is 77%. In France, it is up at 88%. Yet not even a third of Italian homes passed by fiber will use full-fiber connectivity by the same date, say the forecasters.

Homes passed is not quite the same as homes connected, and the low take-up might indicate the final job of home installation remains unfinished in parts of Italy. Another possibility is simply that Italians have a weaker appetite than other Europeans for full-fiber services, perhaps due to affordability. Infrastructure competition might help to lower prices and spur demand.

Nevertheless, a 3.7 billion funding pledge may seem like a wasteful use of taxpayer money in a country that was already on track for more than 90% full-fiber coverage in the next four years. If there is overlapping infrastructure, at least half of it will be redundant at any given moment. In the UK, where dozens of private-sector investors are currently plowing money into fiber, nobody expects all the operators to survive. BT, the broadband incumbent, has already made a net reduction to its workforce of more than 7,500 jobs since March 2019 and will inevitably be weakened by the fiber rivalry, even if it remains the biggest player.

A government effort that badly hurts Telecom Italia risks being counterproductive. For all its faults, it remains Italy's main provider of fixed-line services and is investing heavily in Italy. At around 2.2 billion ($2.5 billion), its capital expenditure for the first nine months of 2021 was 40% more than it spent a year earlier, with the increase attributed mainly to fiber rollout. The FTTH Council Europe says Italian progress on full-fiber deployment has been driven by Telecom Italia initiatives.

Should it happen, a planned takeover of Telecom Italia for 33 billion ($37.6 billion, including debt) by KKR, a private equity group, could turn it into a very different entity. The divestment of Telecom Italia's networks business from the service unit, and majority ownership by KKR, could end the shareholder squabbles of recent years and energize the telco. Its share price was down 2.5% today after news broke of the government funding plan. A private-equity carve-up may be its best hope.