CenturyLink is putting more fiber in the ground -- a lot more.

The telco announced this morning that it would expand its intercity network by 4.7 million miles of fiber in 50 major US cities early 2021. The first phase of the expansion, comprising 3.5 million fiber miles, was completed in June.

It's a reminder that CenturyLink today isn't just an old phone network. The telco is made up of several regional and national telecom companies that built multi-conduit dark fiber networks -- Level 3, Williams Communications, Broadwing and Qwest, to name a few.

The last major intercity fiber network expansion happened about 20 years ago, CenturyLink said, and not only was CenturyLink a different company then, but the fiber itself was different. 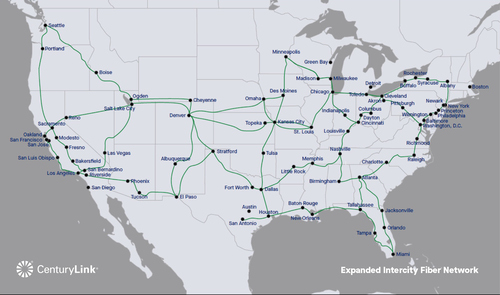 This is CenturyLink's intercity fiber route map. Here's the same map at a size that human beings can see on their computing devices. Source: CenturyLink

"As we build this network, our minimum cable sizes 216 fiber counts. That's the minimum. There are some sections of the intercity network where we're building double or even more than that based on the amount of demand that we see in our forecast," Dugan said.

CenturyLink isn't just using more fiber, it is using newer fiber that doesn't lose as much light. The transmission loss in fiber is measured in decibels per kilometer. The loss in the fibers back when most North American intercity fiber networks were built was around 0.23, Dugan said. Now that dB/km number is down to 0.17.

That's "significant in terms of the optical performance of each individual fiber," Dugan said. And "that budget can be used for additional reach... or additional capacity per wavelength."

You can guess why so much fiber is needed, but we'll tell you anyway. The business reason is "cloud data center demand -- it's dark-fiber driven," Dugan said.

"A lot of the big web scalers are building out pretty major data center infrastructure and a lot of the cloud infrastructure," Dugan said. "We're fortunate enough to be the supplier of the fiber for that, and it's really the increased demand for data center connectivity between cities that's driving the dark fiber demand that initiated this."