A merger once thought impossible appears to be near closing. One of the last remaining opponents to the combination of Sprint and T-Mobile  New York Attorney General Letitia James  said she would no longer oppose the deal.

"After a thorough analysis, New York has decided not to move forward with an appeal in this case," she said in a statement. "Instead, we hope to work with all the parties to ensure that consumers get the best pricing and service possible, that networks are built out throughout our state, and that good-paying jobs are created here in New York. We are gratified that this process has yielded commitments from T-Mobile to create jobs in Rochester and engage in robust national diversity initiatives that will connect our communities with good jobs and technology."

New York was among a group of 14 Democratic state attorneys general (AG) that filed a lawsuit to block the merger of Sprint and T-Mobile, arguing the transaction would reduce competition in the US wireless industry. The case went to trial and last week the judge ruled against the states, an action that removed one of the final obstacles facing the merger.

Now, the New York AG leading the lawsuit against the merger said she would not appeal the judge's decision.

The merger  if it indeed closes  promises to combine the nation's third- and fourth-largest wireless network operators in a transaction that will reshape the US wireless industry. 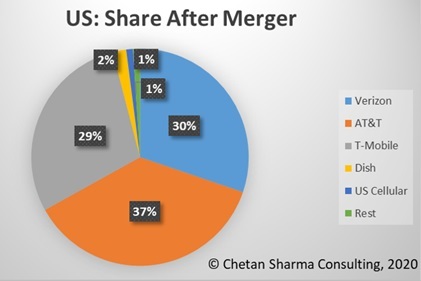 If Sprint and T-Mobile merge, the combined company will command 29% of the US wireless market, just behind AT&T and Verizon.
(Source: Chetan Sharma Consulting)

However, there are still a few remaining obstacles to the merger. First, the other states that had joined with New York told Reuters they are still evaluating whether they'll appeal. Chief among those states is California  that's because the California Public Utilities Commission is still reviewing the proposed merger of Sprint and T-Mobile.

The California AG immediately responded to questions from Light Reading on the topic. A representative for the California PUC said the agency likely would vote on the proposed merger in June or July.

However, Wall Street analysts generally agreed that Sprint and T-Mobile ought to be able to clear the few remaining hurdles to their proposed merger.

"We think the California PUC could approve the deal by mid-March, setting up an official closing of the merger for 4/1," wrote the analysts at Wall Street research firm Raymond James in a note to investors.

"We expect other states to follow eventually, though we note that California is the key state, both due to its leadership in the litigation and the pending California PUC decision," wrote the Wall Street analysts at New Street Research in a note to investors. "We could see California seeking to strengthen the enforceability of some of the New T-Mobile commitments prior to deciding not to appeal."

T-Mobile's incoming CEO Mike Sievert said he expects the proposed merger to close by April 1. After that, the companies are widely expected to renegotiate the financial terms of their merger due to Sprint's deteriorating financial situation, though that process isn't expected to affect the future of the combined company.

The Sprint and T-Mobile merger was given poor odds by lots of Wall Street analysts when it was first announced in 2018. Over the past year and a half, executives from the two companies made promises and concessions to convince lawmakers, regulators and others that the merger would be beneficial to Americans. The companies have so far managed to score approvals from the FCC and the US Department of Justice. The companies' deal with the DoJ included the surprise agreement to allow Dish Network to become an MVNO of T-Mobile while it builds a 5G network using its massive trove of spectrum licenses.