In a separate, but related development, the carrier plans to upgrade its network to 400G, to support the "tsunami" of traffic unleashed by 5G, Fuetsch said in a keynote at Open Networking Summit.

The white box deployment uses a software stack that will be part of the open source Disaggregated Network Operating System (DANOS) Project, and AT&T plans to introduce its code contribution to the community soon, Fuetsch said.

For its 400G deployment, AT&T expects to use Open ROADM optical networking for interoperability, to achieve more competition, mix and match between vendors, and lower the barrier to entry for startup vendors, Fuetsch said. 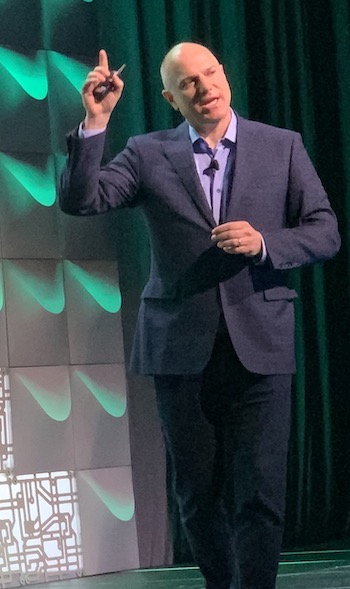 AT&T's Fuetsch makes a point.
You're invited to attend Light Readings Big 5G Event! Formerly the Big Communications Event and 5G North America, Big 5G is where telecom's brightest minds deliver the critical insight needed to piece together the 5G puzzle. We'll see you May 6-8 in Denver -- communications service providers get in free!

Why this matters
AT&T's support will drive mainstream acceptance for two emerging technologies, which are at opposite levels of credibility.

White box networking is still unproven in broad, mainstream production, and viewed skeptically in many quarters. AT&T was an early white box supporter, and its widespread deployment will lead the way for other network operators.

On the other hand, 400G is inevitable, and everybody knows it. Carrier networks are already gasping to keep up with video and other demanding applications, and that will only get harder as 5G emerges, with new, bandwidth-intensive uses. Cisco, Arista and Juniper have all released 400G switches, and Arrcus supports 400G on white box switches.

5G is the unifying factor to both these announcements; the emerging technology's traffic demands and scalability needs require new approaches to building modern networks.

I agree that white box routers are not fully accepted - though there is interest beyond AT&T.