Massive MIMO, many agree, is one of open RAN's big obstacles. Its state-of-the-art radio units, loaded with receivers and transmitters, have required customized silicon developed by giants with multi-billion-dollar budgets and a historical aversion to open RAN. Buying hardware and software components from different vendors  as open RAN should allow  looks more feasible when stuff is simpler. Integration, courtesy of an Ericsson or Nokia, seems to have mattered for advanced products.

So the news that Xilinx and Mavenir are touting a massive MIMO radio unit compatible with open RAN specifications, and that it will be in field trials later this year, is  ahem  a pretty massive deal, the equivalent of discovering your golf club's best player can outdrive Rory McIlroy.

The basic details are that a radio unit featuring 64 receivers and transmitters (so-called 64T64R), and supporting bandwidths of up to 400MHz, will become available in the fourth quarter. Chip designer Xilinx is stumping up the component smarts, including the RFSoC DFE (radiofrequency system-on-a-chip digital front end) and the Layer 1 processing. Mavenir, a prominent cheerleader for open RAN, brings the software used across the entire network.

That raises the first obvious question about this tie-up. Open RAN is supposedly about having the freedom to visit different stores for hardware and software. If companies partner up to offer a one-stop shop, how can any customer be confident of avoiding the system lock-in that comes with a traditional vendor?

John Baker, Mavenir's senior vice president of business development, insists an operator would be able to replace his own company's products with software from Altiostar, Parallel Wireless or any other rival, provided it were based on specifications approved by the O-RAN Alliance, the main industry association. "It is compliant with the O-RAN specification for the 7.2 interface," he says of the massive MIMO product.

The proof would obviously come only if a customer tried switching software provider. In the interim, forthcoming plugfests promised by Baker would help to build confidence. Encouragingly, six service providers described in the promotional bumf as "leading global operators" have already been involved in Indian lab trials.

Another big question mark hangs over the componentry used in this product. Xilinx is mainly associated with field programmable gate arrays (FPGAs), a type of chip that attracted a good deal of negative publicity in the telecom sector following Nokia's earlier decision to use them in its own 5G products. Seen as expensive power hogs, they were previously blamed for Nokia's 5G loss of form against rivals investing in application-specific integrated circuits (ASICs). 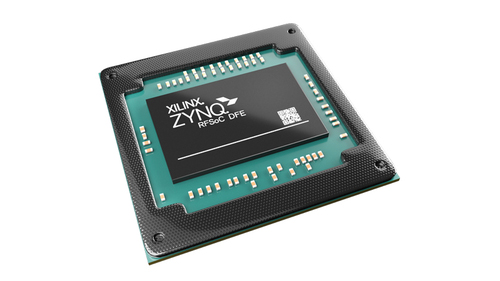 A Xilinx RFSoC DFE, in all its unfettered glory.

But Gilles Garcia, the senior director of Xilinx's wired and wireless group, says the perception is out of date. "I think the people that are raising the flag from the vendors are probably feeling the threat from those types of technology," he says. What's more, the components used in the massive MIMO product are actually a blend of the customized and the programmable. The RFSoC DFE, says Garcia, is 80% ASIC-based.

The wrong conclusions have possibly been drawn from a single vendor's problems. "The FPGAs can be programmed in ways that are efficient and ways that are inefficient, and so if you program it inefficiently you might require two," says Mavenir's Job Benson. "Does that mean the FPGA was bad? I don't think so."

The weight of the unit is unaffected by any decision to use FPGAs rather than a fully customized chip, Garcia also insists. That is important because lightweight units are cheaper to deploy and more energy efficient than heavier ones. Indeed, weight specifications have recently become a marketing battleground between the giants, with Ericsson and Huawei both trumpeting 64T64R units that each weigh about 20 kilograms.

Can Mavenir and Xilinx match this? The companies are holding back some of the details about their product until later in the year, but Mavenir's Baker promises competitiveness with the figures cited by Ericsson and Nokia. "If you haven't got size, weight and feature compatibility, then it makes the justification for moving down this path more difficult," he says. "These will be feature and performance comparable."

Lots of Davids, not many Goliaths

"It is just noise," Baker responds. "Everyone should just add up the total investment of open RAN companies' R&D and all of that is being leveraged into the open RAN space."

While that figure was not immediately available, Xilinx splashed a hefty $853.6 million on overall R&D in its last fiscal year, while Mavenir spent $89.4 million. That compares with the roughly $4.6 billion that Ericsson managed in total.

Support for massive MIMO could be a catalyst for open RAN, transforming it from a niche technology used in less demanding environments to a mainstream 5G alternative. Xilinx's unit is not the only one in the pipeline, either. Ireland's Benetel, notably, is working on a unit with Analog Devices and Marvell, two other chip designers. It expects to have a product ready in a similar timeframe to Xilinx and Mavenir.

Doubts will not be erased until products are launched and deployed commercially. France's Orange has said it does not expect open RAN to achieve "parity" with traditional products until around 2025. Yet Baker, who reckons the Xilinx product will be the first O-RAN-compatible massive MIMO unit to hit the market, says open RAN is developing more rapidly than many would have expected. "Now is the time you will start to see it happening," he says. The industry may soon be able to judge if the fuss is warranted.