The case of the missing British open RAN plan

Shunted by a Trump presidency and a global pandemic, telecom is lurching into nationalism. China, India, Japan, Russia, the US and even Vietnam are either deploying or planning 5G networks built by their own firms. Open RAN, originally conceived as an interoperability fix, has been hijacked by the protectionists to succor local favorites and keep out unwelcome foreigners (usually Chinese).

Officially banning any foreign vendor in such an uncompetitive market as that for radio access networks is a dangerous play. Unless the country in question is happy to rely on a dwindling coterie of giant vendors with uncertain prospects, or place trust in other foreigners with no proven track record, it makes zero sense without a strategy for nurturing homegrown alternatives. Nationalism aside, the arrival of open RAN could be a golden chance to cultivate network start-ups.

For the UK, it might prove to be a missed opportunity. Rather like India, Japan and the US, it has taken steps to exclude Huawei and ZTE, China's network vendors, from its nascent 5G market. Unlike those countries, it has not a single, high-profile example of a local company developing 5G network products. What's more, the closest it has to a technology champion and open RAN stakeholder  Cambridge-based chips designer ARM  is on the verge of being sold to Nvidia, an American semiconductor business.

ARM race
The prospect of an ARM sale to Nvidia worries Hermann Hauser, one of the company's co-founders, as well as politicians in the opposition Labour Party. Ed Miliband, the shadow business secretary, has reportedly asked the government to attach stringent conditions to a sale. His apparent fear is that Nvidia would slash jobs at ARM's UK facility, which employs 3,000 of its 6,500 workers. Hauser's is that Nvidia essentially wants to eliminate ARM, which currently sells designs to Nvidia's rivals. 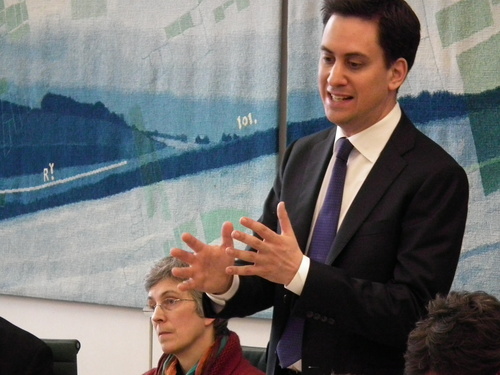 Labour's Ed Miliband has urged the government to intervene if ARM is sold to Nvidia.

A sale to Nvidia would mark the second time the UK has lost ARM. In 2016, the Conservative government was heavily criticized when it allowed Japan's SoftBank to acquire ARM for £24 billion ($30.7 billion, at today's exchange rate). Authorities did at least secure a promise from Masayoshi Son, SoftBank's CEO, to protect UK jobs and not move ARM's headquarters. Son may see little reason to extract a similar commitment from Nvidia.

ARM is an exciting player in telecom. Its designs are used to make the processors that feature in many of the world's most popular smartphones. Although it does not manufacture network equipment, components based on its designs also represent the main alternative to Intel, another US semiconductor company, in parts of the network and data center equipment sectors.

Importantly, it is also the only significant UK contributor to the O-RAN Alliance, the group developing the intellectual property and technical specifications for open RAN networks. As UK operators look to build those, it is not inconceivable that a semi-autonomous ARM and its technical experts could be a linchpin in the local industry.

Dithering politicians
All that has probably escaped the attention of Boris Johnson, the UK's dithering prime minister, and his incompetent political cronies. After announcing the decision to ban Huawei in July, Oliver Dowden, the secretary of state for culture, media and sport, said the immediate priority was "to protect the other two vendors in this market, Nokia and Ericsson."

"Secondly, we need to get new suppliers in. That starts with Samsung. And it starts with NEC," he continued, referring not to any UK start-ups but to South Korean and Japanese alternatives. "We are now at the stage of having technical engagement with their officials."

Open RAN is the future objective, Dowden insisted. "That means working with our partners through international institutions to set the right common standards on which we can have an open RAN network," he said. "In the end, an open RAN network is going to provide the opportunity for UK providers alongside providers from other allies and other countries around the world to start providing that telecom infrastructure."

Yet as analysts forecast a surge in O-RAN investments, fueled by activity in advanced economies such as Germany, Japan and the US, the UK still lacks any providers of note. The open RAN names that are normally circulated include Altiostar, Mavenir and Parallel Wireless, three US software firms. Among larger companies, Samsung and NEC are on the list. Nokia also claims to have open RAN products and figures in the deployment by Japan's Rakuten.

Perhaps wary, after the Huawei ban, of entrusting its networks to other foreign vendors, BT sounds unhappy about the lack of homegrown options. "We have allowed ourselves in the UK ... to have lost the manufacturing part of the supply chain and I do look back with regret on that and think anything we can do to stimulate that for the next generation of telecom technology would be very welcome," said Howard Watson, the chief technology and information officer of the UK incumbent, when grilled by UK politicians in July.

Vodafone, meanwhile, has said open RAN will not develop quickly in the UK without government support. "If we let the market forces take their course, it could take a very long time," said Andrea Dona, Vodafone UK's head of networks, during his own interrogation by officials. "However, with a concerted effort with the government to fund R&D, to pilot and facilitate deployment, to stimulate the entry of new players and support their scalability, those timescales could be reduced."

Dowden has promised government investment in open RAN technology, and yet no details have been forthcoming in the two months since he announced the Huawei ban. For a more diligent administration, this would not have been an afterthought but an essential component of the plan to phase out Chinese equipment. With open RAN now developing fast outside the UK, Watson may be headed for disappointment.