No 2G could mean no deal for companies pitching open RAN technologies to the world's biggest operators. JMA Wireless, a developer of open RAN software based in New York State, says it has replaced Altiostar, a rival, as an open RAN vendor to Telecom Italia. The reason is partly that JMA now brings support for 2G, says Lorenzo Minghini, a product line manager at JMA.

Owned by Japan's Rakuten, Altiostar said in late 2016 that Telecom Italia was using its technology in the "live mobile network" deployed at Saluzzo, a town in Italy's Piedmont region. But a Telecom Italia update on the Saluzzo project cites JMA Wireless and not Altiostar as the software supplier. "We swapped Altiostar gear," said Minghini in a LinkedIn exchange.

Speaking on a subsequent phone call, Minghini tells Light Reading that his company's development of a 2G product was "of course a piece of the puzzle" for Telecom Italia and that other operators have been demanding 2G support. "There are some that are very interested in 2G to do a full swap in brownfields and so for those cases we developed a 2G stack," he says. "That is something we are also pitching to operators and testing in their labs." 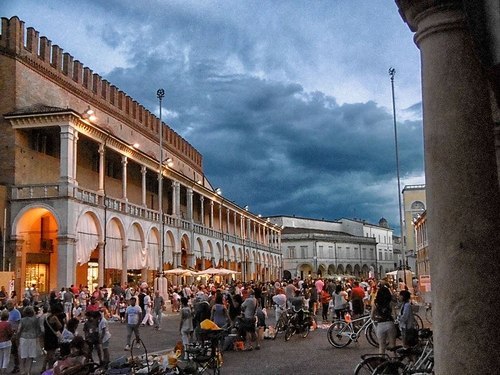 Faenza is a picturesque setting for one of Telecom Italia's initial open RAN deployments.

Open RAN works through new interfaces that allow one vendor's radios to be used with another's computing products. In a traditional radio access network, everything would come from the same supplier.

But very few developers of open RAN software advertise support for older 2G and 3G technologies, which are still in widespread use. While numerous operators are now shutting down their 3G networks, 2G will be needed for many years as the only option for global roaming and to support millions of existing machine-to-machine connections.

Not much 2G support

Of the big kit vendors, neither Ericsson nor Huawei currently markets any kind of open RAN product offer, while Nokia's comes without support for either 2G or 3G, a spokesperson revealed last week. South Korea's Samsung, meanwhile, claims to have developed a 2G product but not a 3G one.

Vodafone UK named Samsung in June as the main supplier for an open RAN deployment covering 2,500 sites. It will need to run this in parallel with its older Huawei network or wait until it has phased out 3G  a process taking longer than expected  before activating Samsung sites. Maintaining two separate networks would drive up costs.

Among open RAN software specialists, Parallel Wireless has claimed to have 2G and 3G in its portfolio for years, while Mavenir bought a UK business called ip.access last year to acquire 2G and 3G expertise. JMA Wireless appears to be the only other developer now publicizing a 2G offer.

JMA Wireless has developed a software platform called XRAN that gives it another important advantage over rivals, according to Minghini. "The other actors in the ecosystem leverage FlexRAN by Intel, whereas at JMA we do everything," he says. "We have our own stack and because of that we can provide performance that does not have the same bugs that all the others have."

XRAN works with Intel's processors but can be deployed on other hardware platforms as well, says Minghini. "We have already deployed commercial solutions with AMD as well as with Intel. The hardware decision is usually driven by our customers."

Besides replacing Altiostar in Saluzzo, JMA Wireless has provided software products for Telecom Italia in Faenza, in the province of Ravenna. It is also used at sports stadiums in Milan and Rome and participating in a multi-operator rollout of open RAN technology in the city of Bologna.

A more widespread deployment will only happen if open RAN specialists measure up to the big kit vendors on performance, Minghini admits. "When you swap these systems, the operators want to make sure that from a performance perspective everything is going as it was before," he says. "We have done months of work with Telecom Italia and other operators to make sure there is at least the same network quality as before."

Any failure of Altiostar to support legacy technologies could potentially upset the growth strategy of parent company Rakuten, which is pitching its various software products to operators in other countries. A software stack that includes just 4G and 5G, the mobile generations that Rakuten has deployed in Japan, seems likely to interest only greenfield operators such as Dish Network in America, Altiostar's most high-profile customer bar Rakuten.

Approached by Light Reading, neither Altiostar nor Telecom Italia had supplied a comment on the latest open RAN developments at the time of publication.