Spectrum-starved Rakuten will be loss-making until 2026  analysts

Rakuten is bleeding. Since 2019, Japan's answer to Amazon has reported losses of about $2.1 billion (at today's exchange rate) on sales totaling $34 billion as a costly project to build a new mobile network has drained resources. It expects to break even by 2023, when most of the heavy lifting has been done. But New Street Research is having none of it. The analyst firm now predicts operating losses will continue until 2026. Ultimately, it thinks Japan will revert to being a three-player market.

What is going wrong? With its state-of-the-art technologies, Rakuten was supposed to be a lean and super-fit rival to Japan's overweight incumbents. Instead, it is flapping around like a floored sumo. And yet its technology has a major cost advantage, according to New Street Research. A model it built with BlueNote, a firm of industry consultants, vindicates Rakuten's claim that its capital expenditure is 40% lower than a traditional operator's on a per-site basis, says the analyst firm in a research note this month. The model also proved Rakuten's operating costs are 30% lower, insists New Street Research.

The problem is not technology but lack of spectrum, according to that note. Rakuten has only one quarter as much 4G spectrum as each of its competitors and no low-band spectrum whatsoever. That has forced Rakuten to rely on a roaming service provided by KDDI and driven up its cost per gigabyte. 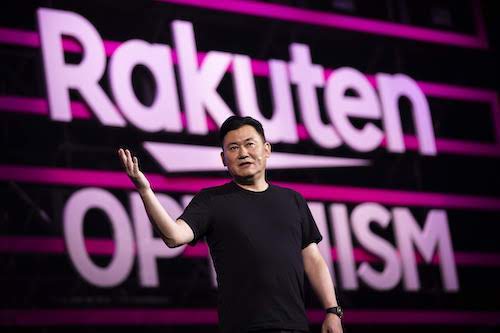 Adding to the problem is Rakuten's tardiness on 5G rollout. While its 4G network comprised more than 30,000 basestations in November, and should reach 96% of the population in the next few weeks, Rakuten had deployed only 1,000 5G sites by March last year. New Street Research reckons the figure has risen to just 2,000 since then and might hit 4,000 by March. But even this doubling would leave Rakuten a long way behind competitors on the rollout of the more efficient technology. KDDI aims to have 50,000 sites up and running by the same date. SoftBank's target is identical.

All told, this means Rakuten must spend at least 1.5 times as much as any other player on a per-gigabyte basis, and possibly twice as much, according to New Street Research. That could change if it can obtain access to low-band spectrum and speed up its 5G rollout. Yet neither seems likely. Existing regulators are not moving quickly to re-farm spectrum, and Rakuten lacks the funds to accelerate deployment.

Unclear from the note is why New Street Research and BlueNote are so convinced that a Rakuten-like operator without its constraints would have much lower costs than a traditional telco. The researchers allude to the "structural benefits of vRAN vs traditional architecture" and say they are willing to share the details of their model. Many observers will be skeptical.

That is largely because there is only so much of the total budget that can be virtualized (the vRAN to which the note refers). Dell'Oro, another market-research firm, has recently estimated that overall wireless capex is roughly $150 billion each year. Of this amount, only between $30 billion and $35 billion typically goes into the radio access network. The rest includes spending on transport and the mobile core, which could fall thanks to more efficient technologies. But it also covers physical infrastructure  towers, steel, cement  that software and the cloud will never be able to eat.

Doubts still surround the business case for RAN virtualization, as well. In theory, operators could save money by stripping the IT resources away from mobile sites and pooling them in data centers, using less equipment for the same footprint. This rearchitecting is Rakuten's sole explanation for its claims about a 40% reduction in capex. But it looks much easier in fiber-rich Japan than in many other countries, where it might necessitate a huge "fronthaul" investment. Nor do the chips that are currently available measure up to the customized silicon of a traditional network, according to several industry executives.

Scott Petty, Vodafone's chief digital officer, is one who has publicly voiced skepticism about the performance of general-purpose processors based on Intel's x86 architecture. "Some of the vendors made some pretty outlandish claims early on to say it was 30% faster, 30% cheaper, and it just wasn't true," he told Light Reading at a press event in late 2021. "Now they need to deliver, but it will require some dedicated silicon. It won't be Intel chips."

Savings might result from network sharing facilitated by the rollout of open and virtualized RAN infrastructure. One telco executive, who spoke on condition of anonymity, said operators could run different software products on shared hardware  something not possible in a traditional network. Yet Rakuten does not currently appear to be sharing its RAN with Japanese rivals.

The company's own numbers about the size of the market also raise questions. Pitching its in-house and partner technologies at other service providers, Rakuten valued the addressable market at between $80 billion and $100 billion last year and predicted it would be worth between $130 billion and $150 billion in 2025. Its breakdown implies a big increase in RAN spending alone. But this would be counterintuitive if virtualization takes off and allows operators to reduce per-site capital expenditure by 40%. 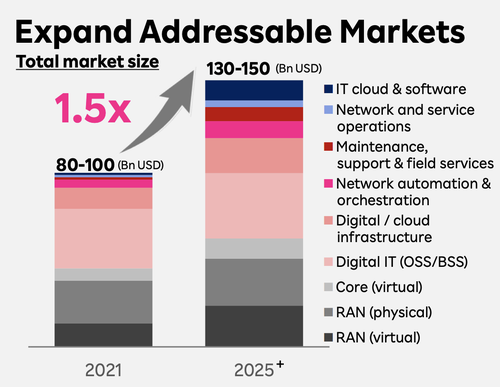 Source: Rakuten
Note: Figures and subsequent breakdown are to show that for every 100 currency units spent on a traditional network an operator would spend only 70 on Rakuten technologies

The argument for reduced operating costs is probably stronger. Rakuten acknowledges that investment in edge data centers and transmission would drive up some expenses but says it can realize savings in rent, electricity and field maintenance with less equipment. A more software-based network may be easier to automate, too.

Yet Light Reading's anonymous telco source says the case for automation is still unproven. Heavier reliance on software might simply change the profile of the workforce. Vodafone, notably, intends to recruit thousands of software engineers over the next few years, partly to avoid relying on systems integrators when it deploys Rakuten-like technologies. It has dismissed suggestions its workforce will shrink dramatically.

Rakuten does appear to be more automated and need fewer employees than a traditional network operator. Its entire operations team comprised just 175 employees back in March 2020, said Tareq Amin, Rakuten Mobile's chief technology officer. It will never employ more than about 350 people, he told Light Reading at the time. Each of its rivals uses thousands, he then reckoned.

Unlike Rakuten, those companies  along with brownfield operators in other parts of the world  still maintain various ageing technologies that cannot easily be phased out or turned off. Their 2G and 3G systems are perhaps the most obvious examples. But old fixed-line networks are also currently a burden. In the UK, BT is likely to shut down up to 4,500 of its 5,500 exchanges with the transition from copper to fiber, says Colin Sempill, the CEO of Neos Networks, a BT rival that has installed its own equipment in hundreds of those facilities.

All this could amount to a big cost advantage for greenfield networks that have adequate spectrum assets. It explains why New Street Research is so bullish about America's Dish and Germany's 1&1, new players that do not have the same constraints as Rakuten and look more focused on 5G. "This means that for both these challengers, we think vRAN creates opportunities for disruption," says the company in its research note. "Just not in Japan."