Rakuten's epic splurge on building a fourth Japanese mobile network continues. Operating losses across the entire company hit 39.8 billion Japanese yen (US$350 million) for the recently ended third quarter, up from JPY7.5 billion ($65.7 million) a year earlier. Despite the buildout and Rakuten's rock-bottom prices, the rate of subscriber growth has slowed. With about 5.1 million subscribers, including nearly 1 million at its older MVNO division, Rakuten is way off the 20 million that New Street Research thinks it needs just to break even.

Third-quarter losses at Rakuten Mobile itself hit about JPY105 billion ($920 million), up more than 70% year-on-year, while sales rose just a fifth, to roughly JPY55 billion ($480 million). It is still confident it will turn profitable in 2023, though. Around 30,000 basestations have been deployed, against a target of 44,000 to cover 96% of the Japanese population. The figure was dramatically increased from 28,000 in February, after executives underestimated what they could achieve with their limited 4G spectrum allocation. But decent progress means Rakuten can look forward next year to the end of a costly roaming agreement with KDDI, the rival whose network it has used.

There is clearly some cause for optimism. Customers on the KDDI network are restricted to just 5GB of data usage each month. Transferring them to Rakuten's no-limits network service will boost its appeal besides lowering costs. Yoshihisa Yamada, Rakuten Mobile's CEO, told analysts today that losses will be at their worst in the first quarter of 2022. "From Q2 and onward, the situation gets better." 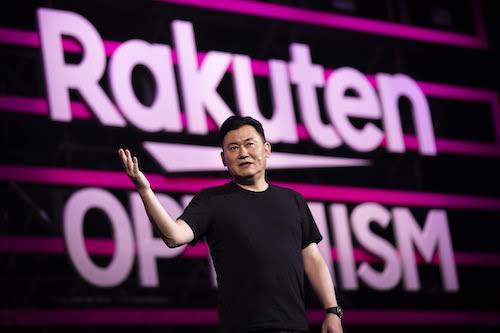 But the experience so far is not the compelling advert for open RAN and more software-based telecom networks that Rakuten would like it to be. Balance sheet liabilities at Rakuten Mobile have soared from JPY172 billion ($1.5 billion) to more than JPY903 billion ($7.9 billion) in just seven quarters. To cover its costs, Rakuten has sold shares worth $2.2 billion to Japan Post, Tencent and Walmart. None of this chimes with Rakuten's message that operators can save 40% on normal capital expenditure and 30% on typical operating costs by using its technologies.

The latest effort to restore some financial health involves preparations for an initial public offering of Rakuten's banking division. "That was another reason why we chose this timing to announce the listing of Rakuten Bank," said CEO Hiroshi Mikitani when asked on today's earnings call about the impact on the balance sheet of Rakuten's mobile project. "We think about how to raise capital for each individual business and how to secure funds for growth by solidifying the capital of Rakuten Group."

Currently missing from the plan is the update on 5G that Tareq Amin, Rakuten Mobile's chief technology officer, previously said he hoped to provide by September this year. Back in March, Rakuten had deployed about 18,300 4G basestations but only 1,000 5G ones. To have scaled to 30,000 basestations just nine months later is impressive and would explain why costs have soared. But Rakuten has made limited financial provision for the newer mobile technology and appeared a long way behind its rivals.

Its original goal was to spend about JPY600 billion ($5.3 billion) on 4G rollout and JPY200 billion ($1.8 billion) on 5G. Revisions earlier this year mean the budget is now more like JPY1 trillion ($8.8 billion), with just 20% of that allocated to 5G. No doubt, Rakuten can piggyback on the site infrastructure it has built for its 4G network. But the higher 5G frequencies it is using could make coverage a problem without additional sites. KDDI, notably, aims to have 50,000 5G basestations installed by March next year.

The telecom industry's interest in Rakuten is increasingly focused on Symphony, the new-look division that Amin now leads. Its job is to sell Rakuten's technologies  those it has developed internally and acquired through takeover activity, as well as partner products  to other telcos outside Japan. Despite its name, it strikes several bum notes.

The first is the projection of the addressable market for mobile network infrastructure and back-office systems. Rakuten believes that is worth about $90 billion this year (at the midpoint of its range) and will generate as much as $140 billion in 2025. Investments in the radio access network alone will grow substantially, according to Rakuten's numbers.

This is all counterintuitive. For starters, Ericsson, using numbers from market research firm Dell'Oro, is forecasting only a 2% increase in the size of the RAN market next year following a wave of 5G investment in 2021. Nor does Rakuten's forecast harmonize with its marketing pitch about open RAN being 40% cheaper to build and 30% cheaper to operate.

An even greater discordancy comes when the sales outlook is considered. Last year, the entire connectivity and communications market generated about $1.53 trillion in revenues, according to IDC, another market research firm. By 2025, that figure will have risen just 5%, to $1.61 trillion, says IDC  barely the rate of inflation. If companies are about to spend 56% more on mobile network and IT products, as Rakuten expects, some company profits may be in for a drubbing.

Symphony is not without successes. Yamada claims it has signed contracts worth JPY300 billion ($2.6 billion). It now boasts 14 customers and has effectively taken charge of a mobile rollout for 1&1, a company building Germany's fourth mobile network. Such inexperienced greenfield operators  especially if they are not part of a large and well-resourced group  may prefer to be led like a child on his or her first day at school than take control of their own affairs.

For others, and especially brownfield players, it is hard to see how a relationship with Rakuten, touting a "full stack" of products, would be any different from an all-in deal with Ericsson, Huawei or Nokia  the very firms whose "lock-in" tactics are a regular target for open RAN supporters. Among other things, Rakuten is using Accenture and Tech Mahindra as systems integrators on Symphony projects. Yet many big operators are determined not to become reliant on these players.

Vodafone is even bolstering its software team with a specific intention of cutting what it pays the likes of Accenture. "The commercial benefit comes from reducing our dependence on systems integrators and spending less with them and developing more of our own capabilities and open architecture," said Scott Petty, Vodafone's chief digital officer, at a recent press event.

Another shrill brownfield note for Symphony is the lack of support it provides for older network technologies. Rakuten is all about 4G and 5G, and Altiostar, the RAN software vendor it fully acquired this year, does not come with 2G or 3G products. While operators are quickly dispatching 3G to the graveyard of telecom technologies, 2G will be around for many years. Lacking 2G, Altiostar is already being phased out of Telecom Italia's small open RAN deployment in favor of JMA Wireless, a US rival boasting a 2G offer.

There may come a time when Rakuten is a shining example to both greenfield and brownfield operators of what cloud and other Internet-style technologies can do for the telecom business. With less reliance on KDDI, falling costs and an uptick in customer numbers would be a good starting point for that story. Today, Rakuten still looks a long way from it.