Rakuten continues to provoke strong feelings on either side of the open radio access network (RAN) debate. To advocates of the mobile technology, the firm's greenfield rollout in Japan makes it a bold trailblazer. To naysayers, it provides a cautionary example whenever something goes wrong. Schadenfreude inevitably greets any misfortune that Rakuten experiences.

That was the reaction when a previous study by OpenSignal, a market research company, suggested Rakuten's 4G network did not measure up to its rivals on speed and other performance criteria. Tareq Amin, Rakuten Mobile's chief technology officer, was quick to blame Rakuten's shortage of 4G spectrum, dismissing suggestions that technology was at all responsible. But the negative publicity did not help Rakuten's case.

So a more upbeat assessment that came out this week must have been welcome. Prepared by umlaut, a German company, it measures Rakuten's 4G network in Tokyo against the best networks in a range of other cities, awarding each one a score out of 1,000. The average across the 14 locations was 912. Rakuten scored 920. "In Tokyo, Rakuten Mobile shows competitive performance with the leading operators in all tested cities," was umlaut's broad conclusion. 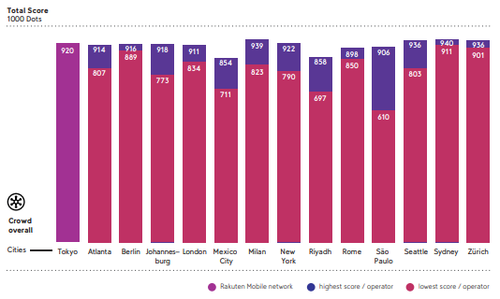 The market research firm examined three criteria in its study  the availability of the network (or coverage), the connection speeds it can support and its "latency," a measure of the time a mobile signal takes to make a round trip (usually expressed in milliseconds). Rakuten aced on coverage and speed but came slightly behind its peers in the third category. "In latency, the Rakuten Mobile network shows room for improvements compared to leading operators in all tested cities," said umlaut.

Any signs of open RAN's competitiveness are important not only to Rakuten. The Japanese firm has packaged up some of its technologies and is trying to sell these around the world. This globetrotting vendor-like role could be a much bigger opportunity for Rakuten than providing telco services at home. But if the Japanese network looks second-rate, interest is likely to fade.

That explains why Rakuten was also hitting back at its critics in a filing with the US Federal Communications Commission, which is attracted to open RAN as a potential boost to 5G network competition. "As Rakuten Mobile has previously explained, it has seen real world performance that is highly competitive with legacy networks, with high network availability and competitive download and upload speeds, while holding a mere fraction of its competitors' spectrum holdings," said the company.

Some operators have already bitten. A new report from Appledore Research names Rakuten in a ranking of 15 open RAN vendors, indicating that five service providers have already acknowledged it as a supplier. No other company in that list is building and operating a telco network. "We note that Rakuten is already making its presence felt in the market beyond Japan, as a supplier to other projects," said report authors. 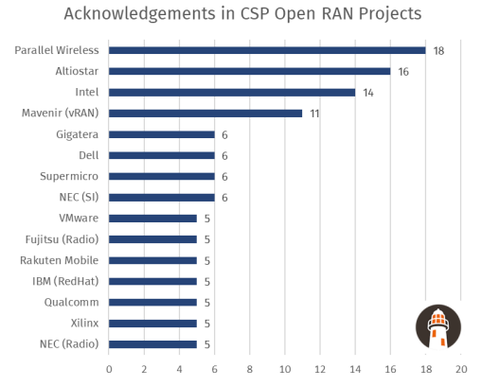 Yet others remain unconvinced. Perhaps the harshest critic in the community of financial analysts is New Street Research, which recently served judgement on Rakuten's launch as one that had "not been commercially successful." Since its launch in April last year, it has managed to capture just 2% of the market, said Chris Hoare, an analyst with New Street Research, and its capital situation is precarious, despite a sale of shares this year to fund rollout.

"The recent deal with Japan Post raised funds to pay the current cash burn for around six months, but the company faces several years of multi-billion-dollar losses in mobile in our view and no obvious route to fund this," he said in a research note. "Short of a Hail Mary deal to sell a stake in the mobile business to a deep-pocketed international partner it is hard to see how Rakuten turns this around in the next two to three years."

Rakuten has long insisted that building an open RAN network is about 40% cheaper than deploying a traditional one, and yet a sale of shares to fund rollout was not in its original plan. One possible issue for the company is that an operator's RAN, strictly speaking, accounts for only a fraction of its total bill. Stefan Pongratz, an analyst at Dell'Oro, says global wireless capex alone is usually about $150 billion in a single year. Annual spending on the RAN is between $30 billion and $35 billion.

None of this necessarily condemns open RAN, which big operators seem determined to use regardless of today's concerns. Senior executives are keen mainly because they do not want to be overly reliant on Ericsson and Nokia, today's big European RAN vendors, in the absence of China's Huawei, which now faces security restrictions in numerous countries. As an open RAN pioneer in a developed market, Rakuten is still seen as technology trendsetter. If it can become a financial success, so much the better.