It's becoming painfully clear that operators are pushing hard on the open RAN trend, with the hope that the technology ultimately reduces their costs and injects some much-needed diversity into their stable of network suppliers.

However, in the same breath they're using to call for more competition, they're also urging more unity.

"We still need to do this very much as an industry," said Andrew Dunkin, a senior manager in Vodafone's network operations, during the Light Reading Open RAN Ecosystem Digital Symposium this week. "We're stronger together rather than separately."

Dunkin added that operators like Vodafone need vendors to support the open RAN trend in venues like the Telecom Infra Project and the O-RAN Alliance.

Mike Kondratiuk, director of infrastructure planning for Verizon, indicated a similar desire for solidarity, arguing that a supportive ecosystem for open RAN "will certainly be a priority."

But perhaps the clearest indication of operators' tightening embrace of open RAN technology  as well as their concerns  came from Franz Seiser, a top executive at Deutsche Telekom. He pointed to the operator's new plans to build an "O-RAN town" next year in Neubrandenburg, Germany, starting with around 150 cell sites from vendors like Dell, Fujitsu, NEC, Mavenir and Nokia.

"We see it improving every day," Seiser said of open RAN. But he noted that the technology is not yet as reliable and stable as traditional RAN hardware and software.

Nonetheless, Seiser voiced support for the overall open RAN wave. "Hopefully we can put together an even better system than we have today," he said of open RAN. He noted that, during the early days of 3G, DT was able to choose from at least 10 different suppliers  now that number is less than five.

Of course, calls for unity are no surprise in the telecom industry. After all, there's little point in building communication networks that cannot connect to each other. But those same calls for unanimity by operators are likely being met with a certain amount of rigidity by top vendors like Nokia and Ericsson, which have survived years of tumultuous consolidation only to have their customers pine for the good old days.

Now, though, virtually all of the world's infrastructure vendors are embracing the open RAN trend to one degree or another. And it appears to be in their best interests.

For example, Verizon recently inked a massive infrastructure deal with Samsung, which many saw as a move by the operator away from its longtime vendor, Nokia. Verizon's Kondratiuk specifically argued that open RAN technology will allow operators to more easily move away from lagging vendors.

"Taking advantage of innovation as well as any new technologies can be very difficult if the vendor does not meet expectations," he said, without specifically naming any vendors.

That said, all the symposium speakers agreed that open RAN technology will mean more work for operators themselves. For example, Vodafone's Dunkin said the company is now engaging directly with silicon providers for open RAN products. "Typically that's not something we've done," he said.

And he acknowledged that vendors need visibility into operators' plans "to understand where operator roadmaps are heading." Along those lines, he offered a look at Vodafone's aggressive open RAN rollout plan: 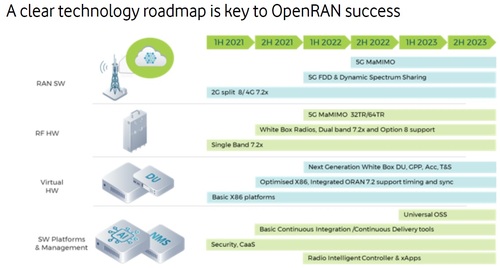 Vodafone is offering a detailed look at its aggressive embrace of open RAN. Click here for a larger version of this image.
(Source: Vodafone)

"We need the support from the vendors in the ecosystem," Vodafone's Dunkin explained.